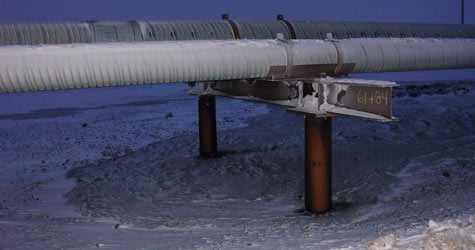 In the months before BP's Deepwater Horizon rig sank in a ball of fire in the Gulf of Mexico, the company had four close calls on pipelines and facilities it operates in Alaska, according to a letter from two congressmen obtained by ProPublica.

Between September 2008 and November 2009, three BP gas and oil pipelines on Alaska's North Slope ruptured or clogged, leading to a risk of explosions, the letter said. A potentially cataclysmic explosion was also avoided at a BP gas compressor plant, where a key piece of equipment designed to prevent the buildup of gas failed to operate, and the backup equipment intended to warn workers was not properly installed.

The letter was addressed to BP's president of Alaskan operations, John Mingé. The congressmen have been investigating BP's safety and operations since 2006, when a 4,800-barrel oil spill temporarily shut down the Prudhoe Bay drilling field pipeline.

Neither Waxman nor Stupak returned calls for comment, and it wasn't clear from the letter how they obtained the information. The pipeline problems were mentioned in trade and local press, but the compressor plant incident does not appear to have been previously reported.

In 2006, after a string of highly publicized accidents, BP publicly committed to improving its safety record, and by many accounts it made progress. But this letter suggests that concerns about the safety of BP operations persisted in the months leading up to the accident in the Gulf this April, which killed 11 workers and has led to the largest U.S. oil spill in recent history.

In the letter, the congressmen say the "serious safety and production incidents" could affect the operation of the Trans-Alaska Pipeline System, a "vital energy security asset" that supplies one-fourth of the nation's daily oil needs.

BP announced strong profits on April 27. According to a banking analyst report, the company benefited from having cut some 5,000 jobs and saving $4 billion in operating expenses.

A BP spokesman in Alaska did not respond by the time of publication after requesting and receiving detailed questions from ProPublica.

The revelation of the incidents comes as BP is battling to stop the 210,000 gallons of oil that are gushing each day from a broken well pipe into the waters of the Gulf. In that accident, a shut-off valve that Doug Suttles, BP's chief operating officer for exploration and production,  described Monday as "failsafe," failed to close, and the company had not installed a remote control backup valve that also might have stopped the spill.

In the most dangerous of the incidents last year in Alaska, safety backstops also failed. On Oct. 10, 2009, a staging valve stuck closed at a large central compressor station in Prudhoe Bay where gas is captured for re-injection back underground. According to the congressional letter, the blockage caused gas to back up on another series of valves. A backup flare meant to burn off that collection of gas was not lit at the time, and cameras, installed so BP's staff could monitor the flare's functions in real time, were not pointed in the right direction. There was no explosion; the gas vented out before anything could ignite it.

Robert Bea, a professor at University of California Berkeley's department of civil and environmental engineering who has worked for both Shell and BP on Alaska's North Slope, said the situation at the compressor station sounded like a ticking bomb.

"It's hard to describe these explosions in terms that people can understand," he said. "It would rival the biggest ones that we have ever had in the history of the oil and gas industry."

Bea said a blast zone could reach 300 feet and leave a crater 90 feet wide. He likened the potential scenario to a gas valve error that led to the massive explosion of an offshore drilling platform called Piper Alpha in the North Sea in 1988, in which 167 workers were killed.

In a Sept. 29, 2008, incident cited in the congressional memo, a high-pressure gas line blew apart without igniting, sending a 28-foot long piece of metal 900 feet through the air and spewing gas.

"Let's just call them lucky," Bea said. "Even the steel bouncing around can ignite sparks to erupt the gas."

On Jan. 15, 2009, a cleaning pig -- a bullet-shaped device that runs diagnostics inside the pipeline -- got stuck and let large amounts of gas leak into a pump station.

And on Nov. 29, 2009, an 18-inch pipe carrying a mixture of oil, natural gas and waste water ruptured, spraying its flammable contents.

BP has a recent history of disasters stemming from incomplete maintenance and faulty equipment, including the 2005 blast at a refinery in Texas City, Texas, where 15 workers died after a fuel tower was powered up without following protocol. Then there was the 2006 Alaskan pipeline spill, which occurred four years after BP had been warned about corroded pipelines. The company pleaded guilty to felony counts in the first incident and a misdemeanor charge in the second, tallying fines in excess of $62 million.

The Committee on Energy and Commerce, now chaired by Waxman, has oversight authority for the Trans-Alaska pipeline. In congressional hearings after the 2006 Prudhoe Bay spill, BP management was accused of making "draconian" budget cuts that affected safety and health, including limiting the use of a corrosion inhibitor inside the pipeline, a step that could have prevented the deterioration that led to the 2006 spill. In his most recent letter, Waxman repeats the concern that the company is cutting corners.

Last weekend BP's CEO, Tony Hayward, told the BBC that the company's latest spill in the Gulf had no relation to the past. "I don't think it's a trend," he said. "This has got nothing to do with what went on at Texas City."

In a 2006 interview with this reporter after the refinery fire and the Prudhoe Bay pipeline spill, BP America's former CEO, Bob Malone, said, "I cannot see a systemic problem in BP America."