Shortly after the November election, with the nation’s political attention focused on the Trump transition, an influential advocacy group met outside Washington to discuss how to leverage the extraordinary shift of power to Republicans in the rest of the country.

The American Legislative Exchange Council — a nonprofit better known as ALEC — briefed its members and allied groups on the bright future for its agenda now that Republicans will effectively control 68 of the nation’s 99 state legislative bodies, as well as 33 governor’s mansions. Among other things, group members said they would push bills to reduce corporate taxes, weaken unions, privatize schooling and influence the ideological debate on college campuses.

“We can pretty much do whatever we want to right now,” said Rep. Jim DeCesare, a Republican state legislator in Kentucky, where the party gained the state House for the first time in nearly a century.

DeCesare, who had been minority whip, described plans for “a pretty intense agenda” including a so-called right-to-work law allowing employees who are covered by collective bargaining agreements to opt out of joining labor unions. Another, he said, would be repealing rules that require government contractors to pay employees more than the minimum wage. Neighboring states competing for new businesses, he said, had already gutted such regulations.

“We’ve got some catching up to do, but we plan to make up a lot of ground in a very short time,” DeCesare said. “This is our time to shine.”

Another ALEC official, Michael Bowman, told the group that outside advocates, not lawmakers, held the key to success. “Legislators are not the trailblazers of developing policies,” Bowman said. “They’re actually the retail consumers.”

ALEC, founded in 1973, acts as a clearinghouse for business-friendly model bills. Among its major donors are the billionaires Charles and David Koch. Members include corporations and their lobbyists, along with hundreds of legislators who work together to craft free-market legislation offered in many states at once. The group has successfully advanced bills imposing voter ID rules and loosening labor and environmental regulations.

Because the group generally allies with Republicans, November’s results provide the best chance yet to turn its ideas into law. In Iowa, for example, the party regained dominance in the state Senate, winning a trifecta of both chambers and the governorship for the first time in almost two decades. Republicans expanded their lead in the Pennsylvania Senate to a two-thirds majority, large enough to threaten to override vetoes by Gov. Tom Wolf, a Democrat. Even in North Carolina, where Democrat Roy Cooper eked out a win for governor, Republicans retained their veto-proof majorities in the legislature, where lawmakers have pushed through a series of controversial laws, including one that rolled back protections for transgender people using public bathrooms. The number of states where Republicans control both the legislature and the governor’s office will rise from 23 to 25. The total number of Republican legislators nationwide also has grown. 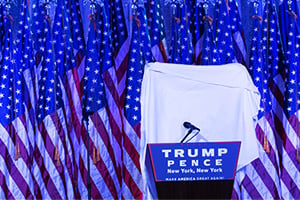 ‘America Comes First’ can’t seem to decide if it’s a PAC or a super PAC, but in either case its federal filings remain problematic. Read the story.

The post-election lunch meeting, held Nov. 17 at the organization’s Arlington, Virginia, headquarters, included members of ALEC and other conservative groups, with some calling into a private conference line. Ashley Varner, a strategic communications director at ALEC, opened the session by pointing out that with the power shift in Washington, opportunities at the state level were flying under the radar. “There’s a sea of red,” Varner said, adding that hundreds of incumbents from both parties had been ousted. “What are we going to do with these new legislatures?’

Inez Feltscher, director of ALEC’s education task force, outlined plans to advocate for legislation giving money to parents who take their children out of public schools — stipends they could use for private schooling or other educational expenses. Critics of these “education savings accounts” say they’re a drain on public-school funding, while proponents argue they give parents a chance to pick the best situation for their kids.

Feltscher acknowledged another motivation: “To break the monopoly on one of the most important institutions in America.” Conservatives have long been at odds with teachers unions over the structure and curriculum of public schools. “We’ve let the left take over almost all of the cultural institutions of this country,” she said.

Another ALEC target, Feltscher said, would be the state of “free debate on American universities,” which conservatives say are largely dominated by left-leaning faculty, courses and speakers. For example, she said, lawmakers could use a range of tactics to press administrators to include multiple ideologies during on-campus public policy talks, such as demanding an annual count of campus events that included more than one perspective. Simply requiring measurement and public reporting would apply pressure, she said, but legislators could also take it to “the nuclear level” and threaten to pull funding from schools that are perceived to be limiting discourse.

“There’s going to be a lot more aggression on this,” Feltscher said.

ALEC executives also forecasted tax cuts and other conservative fiscal reforms in New Hampshire, Missouri, Alabama, Mississippi, South Carolina and West Virginia. Jonathan Williams, vice president of ALEC’s Center for State Fiscal Reform, reminded the group that one of the only Republican majorities lost in November came in Nevada, where taxes had been raised.

Williams acknowledged the presidential campaign was “a little light on policy details” but said he was optimistic the Trump administration would follow the states’ lead. “The stars have aligned,” Williams said.

Bowman, who is ALEC’s vice president of policy, said the change in Washington might benefit ALEC’s fight to preserve anonymity for donors to politically active nonprofit groups at the state level. With Trump in office, Democrats might now start to see the value of this privacy. “Democrats who are afraid of the Republican administration are beginning to say ‘Maybe we need to embrace some First Amendment rights,’” Bowman said.

Contacted for comment, Varner, the ALEC communications director, said the organization’s optimism is based not on expanded Republican control, but rather voter discontent with the status quo, regardless of party. DeCesare, the Kentucky lawmaker, responded with an email stating he didn’t attend the meeting. Varner, however, confirmed that DeCesare had called into the meeting on the conference line.

This week, some of the promises DeCesare made during the ALEC meeting began to materialize, with a Kentucky House committee approving a “right to work” bill and another to roll back the prevailing wage rule.

Stephen Voss, a University of Kentucky political scientist, said the Republican resurgence will have a major impact on important policies across the country. He expects most of the changes to percolate out of formerly split states where the GOP has now taken total control — like Kentucky — rather than in states with longstanding Republican majorities.

“Those are the states where there’s just a lot of pent-up demand, a lot of unhappiness with the status quo,” he said. “The people who have been waiting to make those changes can now implement them.”

Voss said that shifts in political control after years of stability often produce a period of dramatic policy innovation.

“And what we know about public policy is it spreads,” Voss said. “Other states will pick up their innovations, good or bad.”