In 2013, ProPublica published an investigation of the subprime lender World Finance. World was charging annual interest rates that could exceed 200 percent, often trapping customers in cycles of debt by enticing them to renew the loans over and over. In states where laws barred such high rates, the installment lender loaded many loans with nearly useless insurance products that bloated the cost. The company boasted over 800,000 customers, part of an installment loan industry that claimed to loan to millions.

The following year, World disclosed that it was under investigation by the Consumer Financial Protection Bureau. The CFPB, the brainchild of Sen. Elizabeth Warren, D-Mass., was created by the 2010 Dodd-Frank financial reform bill, and under the leadership of Richard Cordray, the agency took action against credit card lenders, mortgage servicers, payday lenders and others for unfair practices against consumers.

But after Cordray left last November, President Donald Trump installed Office of Management and Budget head Mick Mulvaney as acting director. To say that Mulvaney has been a critic of the CFPB is a vast understatement. In a 2014 interview given when he was still a Republican congressman, Mulvaney said of the CFPB, “some of us would like to get rid of it” and called it “a joke ... in a sick, sad kind of way.”

In the past month, Mulvaney’s influence has become increasingly apparent. The CFPB announced it will “reconsider” its landmark rule on payday loans, which was issued last year and aimed to prevent borrowers from getting stuck just paying the interest again and again on such loans because they could not afford to pay them off. The next day, the bureau announced it would be inviting comment on all aspects of the CFPB’s business “to suggest ways to improve outcomes for both consumers and covered entities.” It has also begun to drop enforcement actions.

Last week, it dropped a lawsuit against a group of payday lenders that charged interest rates that touched 950 percent. The companies were associated with a Native American tribe, a common dodge the industry has used because it allows lenders to evade state interest-rate caps.

And around the same time, it turns out, the CFPB also sent a letter notifying World Finance that it was dropping its investigation into the installment lender. The company disclosed the letter in a press release yesterday. Although the CFPB had not actually sued the company, it did notify World in 2015 that an enforcement action was likely, according to a company disclosure.

Warren, in an email responding to questions about the CFPB’s decision, said the action showed Mulvaney was making good on his earlier vows.

“CFPB should protect consumers, not giant companies that use sky high interest rates to trap hundreds of thousands working Americans in debt,” she wrote. “Dropping this case is more evidence that Mick Mulvaney is just using his time at CFPB to pay back the donors who funded his political career.”

As the International Business Times reported today, World contributed a total of $4,500 to Mulvaney when he was a congressman from South Carolina, where World is headquartered. 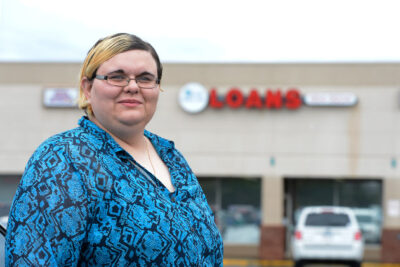 The 182 Percent Loan: How Installment Lenders Put Borrowers in a World of Hurt

Many people know the dangers of payday loans. But "installment loans" also have sky-high rates and work by getting borrowers — usually poor — to renew over and over. We take you inside one of the biggest installment lenders, billion-dollar World Finance.

The CFPB declined to comment. But in an email to CFPB staff today, Mulvaney laid out what the bureau’s new approach should be. He had “no intent in shutting down the Bureau,” he wrote, but said that his leadership would contrast sharply with Cordray’s approach of aggressive enforcement. The CFPB worked for all taxpayers, he wrote, and that includes “those who take loans, and those who make them” and “bringing the full weight of the federal government down on the necks of the people we serve should be something that we do only reluctantly.” Going forward, he wrote, there would be “more formal rulemaking on which financial institutions can rely, and less regulation by enforcement.”

No area of Americans’ financial lives will be quite so affected by the CFPB’s recent turnaround as high-cost lending. Prior to the CFPB’s existence, there was virtually no federal regulation of these types of loans, which are spottily regulated at the state level. Although public opinion generally runs against allowing interest rates in the triple digits, the industry is adept at evading state rules and gaining sway with state lawmakers.

The CFPB rule would have dramatically curtailed payday and other high-cost short-term loans, but notably would have left longer-term loans like those offered by World Finance untouched. That made the possibility of an enforcement action against World particularly noteworthy. But the industry can apparently now rest easy. Any near-term threats to its ways of doing business are likely to emerge from the states, where past fights over interest-rate caps have been contentious and sometimes ugly.