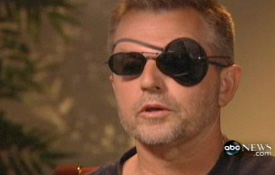 As ABC News is reporting, we are about to publish a major investigation detailing how U.S. contractors wounded in Iraq and Afghanistan have been sent to a private insurance system that offered substandard treatment and delayed their care as they suffered from devastating injuries. The company playing the role of Dr. No? AIG. The investigation will also examine how the U.S. government has pumped billions of dollars to AIG and other carrriers, while failing to make sure they delivered care.

From ABC News' The Blotter:

An Oklahoma man who lost an eye and a leg in Iraq says the giant insurance company AIG refused to provide him a new plastic leg and fought to keep from paying for a wheelchair or glasses for the eye in which he has 30 percent vision.

AIG has made everything a battle after injury, he says.

"They bought the cheapest thing that they could get away with," said 51-year old John Woodson, a truck driver for the KBR contracting firm who lost his leg when his truck hit a roadside bomb in Iraq.

"Everything's been a struggle, a constant fight," said Woodson, injured in Oct. 2004. "It's been hell since."

The results of our investigation will be aired on ABC's 20/20 tomorrow night, in tomorrow's Los Angeles Times and of course here on ProPublica's site.

Sign up for ProPublicaâs e-mails and you'll get an alert as soon as this investigation goes live on our site.