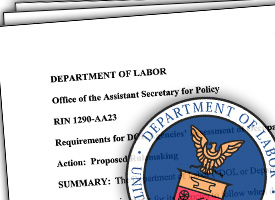 Remember that "secret rule" the Labor Department was trying to push through that would have made it harder to regulate toxins in the workplace? Well, it's moving forward, the Washington Post reported today. The Post first broke the story on July 23. The rule has moved with surprising speed toward approval, in sharp contrast with the administration's normal approach to safety and health rulemaking, which is to, well, do nothing.

We've been covering the story, talking to experts, posting a draft of the proposed rule and the subsequent legislation congressional Dems proposed to block the administration.

The proposed rule would add an extra step and critics say would make it even harder to create tough rules on toxins in the workplace. The proposed rule, which was entered into the Federal Register today, doesn't appear as onerous as earlier drafts and much of the language that angered critics has been removed. But since the proposed rule adds a step to the process -- essentially giving businesses more say in the process -- it could still impact OSHA's ability to regulate workplace toxins, said Celeste Monforton, a researcher at George Washington University’s School of Public Health.

"Their intention with this whole thing is to make it extremely difficult to get rules out," Monforton said.

If you want to read the rule you can find it here in the Federal Register (PDF).