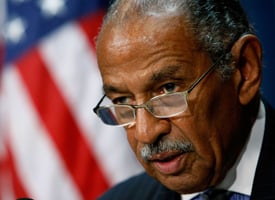 In interviews, eyewitnesses -- including some of the vigilantes themselves and two men who were blasted with a shotgun -- describe a string of shootings in which at least 11 people were wounded or killed. Here's a video on the violence, featuring interviews with some of the vigilantes, including one who says, "It was great! It was like pheasant season in South Dakota. If it moved, you shot it."

"I am deeply disturbed by the reported incidents in Algiers Point, Louisiana following Hurricane Katrina," said Conyers, a Michigan Democrat and chair of the House Judiciary Committee.

Algiers Point residents, Conyers continued, "allegedly shot randomly at African Americans who had fled to the area escaping the effects of the storm. Several injuries and deaths were reported. I am particularly concerned about accounts that local police fueled, rather than extinguished, the violence."