As many Illinois businesses have shut down or instructed employees to work from home to avoid the possible spread of the novel coronavirus, low-wage factory and warehouse workers continue going into work, often doing jobs that people don’t realize are considered essential.

And there seems to be as much, if not more, work available than ever — a situation unlikely to change in the near future. Gov. J.B. Pritzker’s order last week for residents to shelter in place includes exemptions for “essential activities” such as the production of food and medical supplies, and the supply chains necessary to make those goods.

“The bread that you see on the shelf is not just the bread itself. But there’s a twist tie, and there’s a plastic bag that holds the bread,” Pritzker said during a recent press conference, when asked why so many manufacturing jobs were considered essential. “The same thing is true for bottle makers for pharmaceuticals: Someone makes the tops, someone makes the bottom of the bottles.”

In interviews with about a dozen workers over the past week, many said they are afraid of going to work and getting sick but can’t afford to stay home and isolate themselves. They feel lucky to be earning a paycheck when so many others are losing jobs in restaurants and hotels, but they don’t want to risk their health. What worries them, they said, are conditions that were previously routine but now are frightening: working on tightly packed production lines or clocking in for the workday using fingerprint scanners.

“There’s parts of the line where you’re literally rubbing elbows with each other,” said one factory worker, who like others interviewed for this article spoke on the condition of anonymity for fear of job retaliation or deportation. “I’m washing my hands more, but I’m still worried.”

Fears are also spreading through factories about co-workers who test positive for COVID-19 and whether management reacted quickly enough to send the employee home and communicated a possible health threat to other workers.

“We understand the fear that’s going on,” said Mark Denzler, president and CEO of the Illinois Manufacturers’ Association. “Employers need to communicate in the best fashion, but all the members I’ve talked to are asking the right questions, taking the right steps to keep workers safe.”

Denzler said his organization has encouraged member companies to follow guidelines from the Centers for Disease Control and Prevention to protect their workers.

Some companies are now instituting mandatory sanitation breaks, where workers stop what they’re doing to clean their workstations or themselves, Denzler said. Other factories are splitting shifts, going from, for example, 100 employees on one shift to 50 workers on two shifts to increase the spacing.

Some workers said the factories and warehouses where they work were taking the right safety measures, including wiping down machinery with disinfectant and propping open doors to bathrooms and cafeterias so workers don’t have to touch the handles. But many more said precautions fell short.

“Companies aren’t taking the health of their workers seriously,” said Isaura Martinez, an organizer with the Chicago Workers’ Collaborative, which focuses on temporary workers. “They’re exposing workers where they can be infected on the job.”

Last week, the collaborative started circulating an online petition asking Pritzker to “take swift and forceful action to enable us to safely produce the goods our state needs while protecting us, our families and the communities we live in.” Among the requests: banning the use of biometric time clock scanners, which “clock in” workers using their fingerprints; requiring 6 feet of space between employees; and mandating paid sick time for temporary workers. 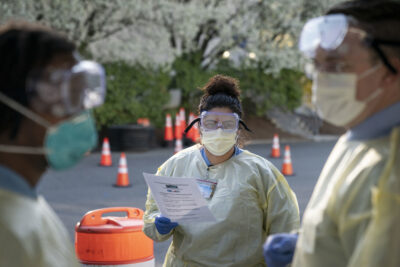 Pritzker’s office did not respond to a request for comment. But as part of a public-private partnership announced Monday to ramp up production of personal protective equipment, including face masks, gloves and hand sanitizer, Pritzker said that “these factories will be adhering to strict social distancing guidelines to ensure that the workers behind the PPE are safe and healthy too.”

The use of biometric time clock scanners has become increasingly common at staffing agencies, warehouses, factories, logistics centers, fast-food franchises and nursing centers, said Brandon Wise, a St. Louis-based attorney who has filed about 80 lawsuits in Illinois because of privacy concerns related to their use.

At some work sites, “maybe 500 people a day put their hand on the machine,” he said. Before the spread of COVID-19 became a national and international crisis, the hygiene associated with this practice was an issue that rarely came up in his conversations with workers and employers. Now, it is.

“Employers need to be cognizant of making sure people are washing their hands, probably before and after using these devices, or making sure there is some sanitation process in place for the employees using it, or hand-washing or a Purell-type gel,” Wise said. “And making sure that the devices are getting cleaned.”

That does not always happen, workers at multiple factories said. At a soap and shampoo bottling plant in the southwest suburbs, two temporary workers described how the biometric scanning machine they use each day is a significant distance from the nearest sinks, which are in bathrooms across a lunchroom and down a hallway. Recently, somebody left a bottle of rubbing alcohol near the machines, which some workers were using to clean their hands.

“I’ve been trying to wipe down the machine with a paper napkin,” said one worker, who is reevaluating whether to continue working. “More than anything, it’s because my parents live with me. They are elderly.”

Officials from the bottling company or the staffing agency could not be reached for comment.

One precautionary measure some facilities have taken to try to stem the spread of COVID-19 is to check workers’ temperatures and send them home if they show signs of fever.

Workers have mixed feelings about the temperature checks. They don’t want to get sick from their co-workers, but in many cases they won’t get paid for showing up if they get sent home because they have a fever.

“To tell you the truth, last week I felt so bad I couldn’t go to work one day [earlier this month]. … I felt exhausted, like I had no strength left in my body, and I had a cough,” said a woman who works at a factory in Melrose Park, west of Chicago. “But the next day I had to go in. For three days I went in like that.”

Workers at her factory get two paid sick days a year, she said. They can use vacation time, which starts with one week after a year on the job. But many workers, paid the state minimum wage, avoid using vacation days, preferring instead to bank them so they can cash them in when they run into a financial emergency.

Temperature checks create a different set of concerns for workers employed through temporary staffing agencies, which send hundreds of thousands of employees into industrial jobs across Illinois, according to estimates from the American Staffing Association, a trade group.

State law requires that temporary workers receive at least four hours of pay if they are called into work, even if they are sent home and not used that day. There are no exemptions, said a spokesman for the state Labor Department.

Yet one temporary staffing agency sent a series of text messages early last week to workers at a food-packaging factory in Lake County that said otherwise. The Spanish-language messages from the agency said that workers with temperatures of 99.6 degrees Fahrenheit or higher would be sent home, asked to get medical attention and go into isolation.

“Anybody who comes to work sick will be sent home immediately and [the client company] will not be responsible for the four-hour guarantee,” according to a copy of the messages shared with ProPublica Illinois.

A company official said she could not “speak to the why” behind the text messages, except that they were likely intended to ensure workers don’t go to work sick and potentially spread the virus. She said the company would “absolutely make sure that [workers] are paid appropriately and in accordance with any state and federal law.”