I grew up in Miami, where swarming the grocery store before a hurricane was a near-annual ritual. We packed our carts and waited in long lines, but there was certainty, at least in that very moment, that we were safe. The storm had not yet arrived. It was still on the TV screen, a disc spinning slowly in the ocean, behind a cone of uncertainty that meant we might not get hit at all.

Now, we’re shopping in the middle of a hurricane we cannot see. The incubation period for COVID-19, the disease caused by the novel coronavirus, is two to 14 days. Experts have predicted some hospitals could start becoming overwhelmed by next week. This means a good number of those future patients are possibly infected right now, unaware, the virus incubating in their bodies and spreading.

It’s why governors across the country have closed bars and restaurants. But grocery stores remain open. So we’re maneuvering past one another in crowded aisles and fighting over frozen food. We’re waiting in snaking lines and exchanging money with tired cashiers, who say they have been working for six days straight and have never seen so many customers in their lives.

Some people can’t afford to buy the recommended two to three weeks of supplies at once, and they have no choice but to keep venturing out. But others are loading up on everything they need, then being tempted, by pictures of empty shelves, to run back to the store for more. Epidemiologists and doctors have been warning the public for days that braving crowds for any reason is a gamble; if a trip isn’t essential, they say, don’t risk getting yourself sick or infecting others, including store workers who have no choice but to be there. 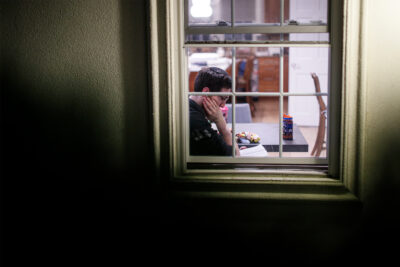 Some of those workers have contacted ProPublica in the past few days; they’re scared. We’re withholding their names, because some spoke out against their employers and others didn’t reach out to be interviewed but were just desperate for advice.

Reporter Caroline Chen got a call from a very worried woman in the Seattle area on Thursday night. She was working at a grocery store not far from where an Amazon employee had tested positive. She was elderly, in the “at risk” demographic being urged to stay home. But she was stuck working the cash register as people panic-shopped all around her. She had no paid sick leave and said she needed the job to pay rent.

She noted that Washington Gov. Jay Inslee had announced that anyone who got sick, or was instructed to self-quarantine because of a confirmed exposure, would be compensated. But that meant she had to wait until she got sick. She was at a loss for options, she said. “I just want to go home now.”

Two days later, Chen heard from another grocery store employee in the Atlanta area who had similar concerns — not about herself but about her older co-workers. “I work with one elderly gentleman who works four days a week because he can’t afford to retire, but his health won’t let him work more than that.” She said management didn’t want cashiers to wear gloves, saying it would “scare” customers.

I spoke with a woman who works at a big chain grocery store in Kentucky, who said on Sunday that though the company was assuring customers they could use disinfecting wipes on their carts, there were none available. Staff was stretched so thin, no one was wiping down shelves. “My main concern is the sheer amount of people coming in,” she said. “Seeing people buy food that would last them a couple of weeks is way different from what I’m seeing now. People are buying ridiculous amounts of stuff. … People are making multiple trips.” 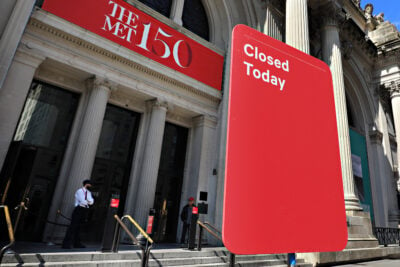 You don’t need to panic-buy, said the mayor of Los Angeles, and county commissioners in Las Vegas, and the governor of Utah, and the president of the United States. Food suppliers and retailers told The New York Times that while they’re scrambling to keep up with demand, their supply chain remains strong.

Those who sell food are keenly aware of the risk of transmission. Stores are cutting hours to allow employees to restock and clean. Food delivery services have set up no-contact drop-offs, in which the driver leaves the order without interaction.

If you need to venture out, minimize your risk, said Caitlin Rivers, an epidemiologist at the Johns Hopkins Bloomberg School of Public Health, whose research focuses on improving public health preparedness and response. She uses wipes to hold open refrigerator doors and tucks away her phone so she doesn’t touch it.

Go grocery shopping at low-volume times, like early morning or late at night, said Tara Smith, an epidemiologist at Kent State University. Try to maintain physical distance as much as you can. “The grocery store doesn’t make you magically exempt from viral spread.”

Dr. Leana Wen wants to make sure people understand the storm is already here. They didn’t seem to get that over the weekend when she saw them in line for diners and Starbucks, and gathered for a children’s birthday party.

“People are looking at the numbers in their communities and saying, ‘Oh, we only have one case,’” said the former health commissioner for the city of Baltimore, who also served as president of Planned Parenthood. “Those are only the cases we know of, but because of extremely limited testing capacity and because of the incubation period, there may be thousands of cases in our community. We just don’t know.”

Caroline Chen contributed to this story.