Time and again, opponents have tried to delay a natural gas pipeline that would stretch from Northern West Virginia to Southern Virginia, using lawsuits to stall permit approvals or construction.

And time and again, state and federal regulators have stepped in to remove such hurdles, even if it has meant rewriting their own rules.

Now, the process looks to be repeating itself.

On Tuesday, a federal appeals court blocked a key permit for Mountain Valley Pipeline, a 300-mile natural gas project that’s known as MVP. The 4th U.S. Circuit Court of Appeals ruled that the U.S. Army Corps of Engineers wrongly approved a permit that allowed MVP to temporarily dam four of West Virginia’s rivers so the pipeline can be buried beneath the streambeds.

But rather than pausing or rethinking the project, the West Virginia Department of Environmental Protection has already been rewriting the state construction standards for pipeline river crossings that prompted the appeals court to block the plan.

Once that happens, MVP will apply for a new Clean Water Act permit, which it expects to secure in early 2019, said Natalie Cox, a spokeswoman for the pipeline’s developers. Developers still expect the pipeline to be in service by the fourth quarter of 2019, she said.

“MVP is committed to the safety of its communities, to the preservation and protection of the environment, and to the continued responsible construction of this important natural gas infrastructure project that will serve homes and business in the mid-Atlantic and Southeast United States,” Cox said in a statement. 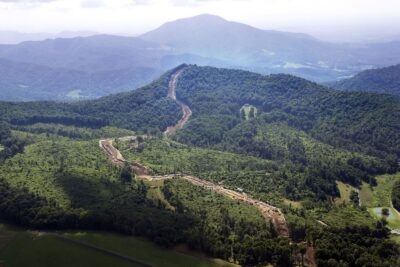 The ruling against the pipeline and the effort to change the rules mirrors a review by the Charleston Gazette-Mail, in collaboration with ProPublica, which found that, over the past two years, federal and state agencies tasked with enforcing the nation’s environmental laws have moved repeatedly to clear roadblocks and expedite the pipeline, even changing the rules at times to ease the project’s approvals.

The stakes are high for West Virginia’s natural gas industry, which is booming and needs pipelines to move its product to East Coast and Southern cities. The issues also loom large for state residents who worry that West Virginia’s drive to encourage natural gas growth poses threats to the environment and their communities.

Last month, MVP developers said the cost of the project had risen from $3.7 billion to $4.6 billion, and they blamed about half of that increase on litigation-related delays.

Projects like MVP require a variety of permits before they can be built. Developers and regulators are supposed to study alternatives, articulate a clear need for the project and outline steps to minimize damage to the environment. In numerous instances, though, officials have allowed the pipeline to go ahead despite serious unanswered questions, the Gazette-Mail and ProPublica found after examining government documents and court records.

Tuesday’s ruling by the 4th Circuit focused on one such move by regulators, a change in guidelines for river crossings needed for four significant West Virginia rivers: Elk, Greenbrier, Meadow and Gauley.

The river crossings involve each river being dammed and excavated — sometimes with blasting — so that the 42-inch-diameter pipeline can be buried beneath the streambed.

This work requires a Clean Water Act “dredge-and-fill” permit from the Corps of Engineers. If the construction isn’t handled properly, sediment can increase in the water, oxygen can decrease and aquatic habitat can be harmed.

Because of those concerns, state officials put in place a 72-hour limit for completing these kinds of stream crossings when they approved the use of a streamlined Corps review process that MVP used.

MVP developers said each stream crossing would take four to six weeks to complete. Nonetheless, despite the 72-hour limit set by the state, the Corps approved the pipeline permit anyway, using the streamlined process that saved the developers time, money and scrutiny.

The Sierra Club, the West Virginia Rivers Coalition and other groups sued and, in June, the 4th Circuit issued a stay of the Corps-approved permit. The stay prompted a late-night news release from Gov. Jim Justice, who said his Department of Environmental Protection would “continue to monitor these proceedings closely to determine what role the state may play in expediting the construction of this pipeline.”

Then, in July, the Corps rewrote its approval of the pipeline to essentially waive the 72-hour limit imposed by the DEP on the river crossing construction. Agency lawyers said the alternative of digging a trench for the pipeline, without diverting water flow, would cause more environmental damage. Citizen groups said the agencies could instead push for MVP to use a more conventional method to bore under the rivers, perhaps reducing the effects.

Last Friday, a three-judge panel of the appeals court heard arguments in the case, and then, on Tuesday, issued a ruling. The unanimous panel said its reasons would be “more fully explained” in a forthcoming opinion, but in a three-page order offered some clues as to its thinking.

The order said the Corps “lacked authority to substitute” one construction method for the 72-hour restriction issued by the DEP. But the DEP is pushing to exempt the stream-crossing method proposed by Mountain Valley Pipeline developers from its 72-hour limit, essentially changing the conditions it had earlier attached to the Clean Water Act permit. The agency is now reviewing public comments submitted by a mid-September deadline.

Kelly Martin, director of the Beyond Dirty Fuels Campaign at the Sierra Club, which opposes the pipeline, urged the DEP not to follow through on those changes.

“This isn’t a goal-post-moving moment,” Martin said. “[The] DEP needs to end this game and do its job. Full stop.”

MVP developers submitted a letter in support of the changes. The West Virginia Rivers Coalition opposed the changes, and Appalachian Mountain Advocates, a nonprofit law firm that represents citizen groups, argued that the DEP’s move is illegal.

DEP spokesman Jake Glance said that, although his agency is not a party to the lawsuit before the appeals court, it is “evaluating the ruling and will review the court’s opinion when it is released and respond accordingly.”

As the court case has played out, the Federal Energy Regulatory Commission has been acting to keep MVP construction moving.

On July 27, a panel of judges on the 4th Circuit vacated two construction permits, from the federal Bureau of Land Management and U.S. Forest Service, saying Americans “deserve more than silent acquiescence to a pipeline company’s justification for upending large swaths of national forestlands.” Environmental groups considered the decision a victory, and the FERC ordered construction to stop.

The next week, MVP developers asked for and received permission from the FERC to continue work on the first 77 miles in Northern West Virginia, with the exception of a 7-mile stretch near the Weston and Gauley Bridge Turnpike Trail.

By the end of August, the FERC had granted MVP permission to work on the rest of the pipeline, except for near the Weston and Gauley Bridge Turnpike and Jefferson National Forest, over the objections of FERC Commissioners Cheryl LaFleur and Richard Glick.

“We have significant concerns with today’s decision to allow construction to resume while required right-of-way and temporary use permits remain outstanding,” Glick and LaFleur wrote in a joint statement Aug. 29.