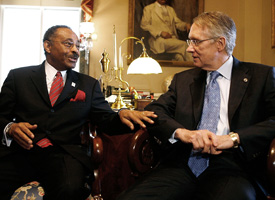 Just when he thought the seat was his, Roland Burris was dealt a blow today in his quest to become Barack Obama's replacement in the Senate.

The Illinois Supreme Court unanimously rejected (PDF) Burris' claim that Illinois Secretary of State Jesse White must certify his appointment. But the ruling may not be all bad news for Burris, as the court said that he could be seated without White's signature.

White refused to sign off because scandal-plagued Illinois Gov. Rod Blagojevich, who was impeached today by the Illinois House, appointed Burris. Blagojevich is facing federal charges that he tried to sell the Senate seat in exchange for personal benefits.

In a dramatic display, Senate officials refused to seat Burris earlier this week. Sen. Majority Leader Harry Reid (D-NV) later said the lack of White's signature was a primary reason for denying Burris entry. At issue is what's known as Senate Rule II, which Senate Democrats say requires the signature of the secretary of state to validate an appointment.

Nevertheless, it’s still up to Harry Reid to interpret the Senate rules. So back to you, Harry.

We've put in a call to his office and will post an update when we know more.