The donors wrote notes on their checks like "Go get 'em!" or "Stop Obama." They scrawled in names of candidates for office in Montana and Colorado, or simply "oil & gas."

But unlike donors to political committees, the names of those who gave to Western Tradition Partnership, or WTP, were never supposed to be made public.

That changed Friday after a Montana district court judge released the social welfare nonprofit's bank records at the request of Frontline and ProPublica, saying citizens had a right to know.

It was the first time that a court has ordered a modern dark money group's donors to be made public, firing a warning shot to similar organizations engaged in politics.

The WTP bank records, which cover a period from March 2008 to December 2010, show that the group raised almost $1.1 million from other social welfare nonprofits, corporations, a political committee and individuals. It received $650,000 from the nonprofits, $70,000 from an Oklahoma businessman and his company and $50,000 from a Colorado homebuilder. Most WTP contributors, however, gave on a smaller scale: 495 of the group's 607 donations were for $100 or less.

The total amount raised by WTP, now known as American Tradition Partnership, was not large, compared to the tens of millions of dollars dark money groups like Crossroads GPS and Americans for Prosperity have collected in the 2012 election cycle.

But the details available on WTP, which has worked to elect conservatives in Montana and Colorado and has won national attention for a lawsuit that led the Supreme Court to apply its Citizens United ruling to states, are striking.

The bank records highlight WTP's ties to groups backing libertarian Ron Paul. The Conservative Action League, a Virginia social welfare nonprofit run at the time in part by John Tate, most recently Paul's campaign manager, transferred $40,000 to WTP in August 2008, bank records show. Tate was also a consultant for WTP. In addition, WTP gave $5,000 to a group called the SD Campaign for Liberty, affiliated with Paul and the national Campaign for Liberty.

WTP's biggest donation that wasn't simply a pass-through, for $110,000, was from the Spur Education Fund, an obscure nonprofit with no website, about which little information is available. Incorporated in June 2010, out of the same Denver law firm address as Coloradans for Economic Growth, the fund transferred money to WTP four times between July and September 2010.

Scott Shires, the man who incorporated WTP in Colorado in 2008, appeared to have signed off on one of those contributions, raising questions about whether WTP was also affiliated with Spur. A handwritten note on a transfer document for $40,000 from Spur, dated Sept. 2, 2010, said: "Deposit into Western Tradition Partnership acct ending 5610 as per Scott Shires phone request."

Shires, who says he has been the public face of about 600 committees over the past 20 years, has maintained he had very little involvement with WTP. On Sunday, he said he wrote some checks for the Spur Education Fund but didn't remember anything else. 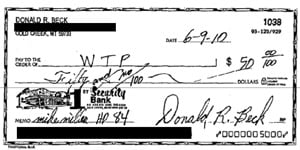 "It's a game," he said. "There are people that don't want their names connected to certain committees, and I was the public name period. And that was case with WTP."

Social welfare nonprofits, unlike super PACs, are allowed to keep their donors secret. Although they can spend money on politics, their primary purpose is supposed to be social welfare, or helping the community at large. ProPublica has written extensively about how some of these groups exploit gaps between election authorities and the Internal Revenue Service, the regulatory agency for social welfare nonprofits, to spend millions of anonymous dollars on political campaigns.

As some nonprofits have pushed the limits, regulators are starting to push back at the state level. Besides Montana, California's Supreme Court ordered an Arizona social welfare nonprofit to reveal the donors for $11 million spent to oppose a California tax initiative and to support a ballot measure restricting union dues collection by Sunday. After saying it would appeal to the U.S. Supreme Court, Americans for Responsible Leadership backed down and announced its donors Monday morning. Who were they? A social welfare nonprofit and a trade association, neither of which has to release its donors. California regulators accused the group of "campaign money laundering."

In an article last month, ProPublica and Frontline described how WTP may have misled the IRS in its initial application for recognition. The bank records we obtained raise new questions, showing no money came in from the man WTP claimed as its primary donor when it asked the IRS to expedite the approval of its application. The bank records also indicate the group raised enough money to require it to file tax returns for 2009 and 2010, yet the IRS has no record of tax returns for WTP after 2008.

The records also raise more questions about potential coordination between candidates and WTP. Candidates, who have strict contribution limits, are not allowed to coordinate with outside spending groups like WTP, which can raise unlimited amounts of money.

Allison LeFer runs a printing company that did work for Montana candidates in 2008 and 2010, many of whom WTP also supported. The printing company, Direct Mail and Communications, shared a post office box with WTP, bank records show. In August 2008, WTP also transferred money to a business checking account for "DMC Consulting," possibly another name for LeFer's company.

The bank deposits for WTP include a $557.50 check in June 2010 to Direct Mail from Friends of Dan Kennedy, the campaign committee for Kennedy, who won election to the Montana state legislature in 2010. Kennedy, who reported paying this amount to Direct Mail in campaign filings to the state, didn't return phone calls or an email Sunday.

So far, Christian and Allison LeFer have not responded to questions about the bank documents from ProPublica and Frontline. Neither has Donny Ferguson, who now runs American Tradition Partnership.

A Frontline documentary broadcast last month showed how WTP helped to shape the campaigns of candidates in state races in Montana.

After that documentary and a story showing how documents found in a meth house in Colorado pointed to possible illegal coordination between WTP and campaigns, Christian LeFer said the documents had been stolen from his wife's car and mingled in a way to suggest coordination.

LeFer insisted that he and his wife had "scrupulously endeavored" to avoid any possibility of coordination. 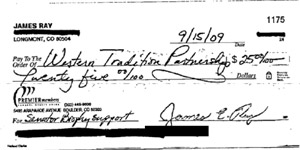 Montana authorities subpoenaed the bank records as part of an ongoing investigation. After the state said WTP should have registered as a political committee and reported its donors in October 2010, the group sued. That lawsuit is due to be heard in March.

Once the records were released Friday and account information was redacted, they were sent to Frontline. The bank records will be available to the public on Monday.

It's not clear whether the bank records in the two WTP accounts reflect all of the money flowing in and out of the group. For instance, a list of prospective donors leaked by a whistleblower who worked for WTP in early 2010 says that a man in Colorado helped "steer us $50k last cycle" from another social welfare nonprofit. Yet there is no record in the bank documents of that donation.

In its one tax return filed with the IRS, WTP claimed it raised almost $666,000 in 2008. Its bank account records show it raised $687,000, most of which was passed on to the National Right to Work Committee.

It's not yet clear how most WTP donors will react to losing their anonymity.

Donald Hood of Longmont, Colo., gave $6,000 in 2009. On Sunday, he said he gave the money not for a specific candidate, but for a specific issue on the ballot he didn't remember. He was upset his donation had been revealed.

"That's nobody's business," Hood said. "Most of my donations are to groups where my donations are anonymous….The fact that you have my name and know I gave money to an organization one time is not really too pleasant, to my mind."

The biggest individual donor to WTP was Norman Asbjornson, a Montana native who gave $50,000 to WTP in August 2008. AAON Inc., Asbjornson's heating, ventilation and air conditioning manufacturing company in Tulsa, Okla., gave $20,000 to ATP in October 2010. (The donation from Asbjornson was made public in a story by the Center for Public Integrity last week.)

Asbjornson couldn't be reached for comment Sunday. He has said he believes taxes inhibit growth and has given more than $160,000 in federal races since 2008, including more than $65,000 to the Republican National Committee, according to the Center for Responsive Politics.

The second biggest individual donor was Larry Mizel, who gave $50,000 in October 2010. Mizel founded M.D.C. Holdings, a homebuilding and home financing company in Denver. He's a major contributor to Republican causes, giving $100,000 to the super PAC American Crossroads in August. Mizel, who couldn't be reached for comment Sunday, is also on the board of the Republican Jewish Coalition, a social welfare nonprofit that is supporting Mitt Romney for president.

Another donor was K12 Management, which gave $20,000 in October 2010. K12 Management, which bills itself as the "largest provider of online education for grades K-12," was co-founded in 2000 by former Education Secretary William Bennett and has been at the center of controversy over the rapid rise of for-profit virtual schools.

In some ways, WTP's bank records show it ran like many small local businesses. The group overdrew its accounts on several occasions. It bought merchandise at Big Bear Sports Center and purchased meals at restaurants like Montana's Rib & Chop and Wahoo's Fish Taco.

Most of the group's checks even misspelled its name, bearing the moniker "Western Traditon Partnership."