Lauren Berns was browsing Talking Points Memo when he saw an ad with President Obama’s face. “Stop the Reckless Spending,” the ad read, and in smaller print, Paid for by Crossroads GPS.    Berns was surprised. Why was Crossroads GPS, a group that powerful Republican strategist Karl Rove helped found,advertising on a liberal-leaning political website? Looking closely at the ad, Berns saw a small blue triangle in the upper-left hand corner. He knew what that meant: this ad wasn’t being shown to every person who read that page. It was being targeted to him in particular. Tax-exempt groups like Crossroads GPS have become among the biggest players in this year’s election.  They’re often called “dark money” groups, because they can raise accept unlimited amounts of money and never have to disclose their donors.

These groups are spending massively on television spots attacking different candidates. These ads are often highly publicized and get plenty of media attention.

Who they’re targeting, and what data they’re using, is secret.

Online advertising companies have amassed vast quantities of information on what individual people read, watch, and do on the Internet. They collect this data using small files called cookies, which allows them to track Internet users as they move from site to site.

These anonymous profiles of information are used to customize advertisements—like sending casino ads to someone who just bought a plane ticket to Vegas.

Many Internet users who see these ads may not be aware they’re being targeted.

As we’ve detailed, both the Romney and Obama campaigns are using advanced tracking and targeting tactics. Working with our readers, we found two examples of dark money groups using this kind of targeting, as well: one ad from Crossroads GPS and one ad from Americans for Prosperity, a nonprofit linked to the politically influential Koch brothers.

How many of these ads are dark money groups sending out? It’s hard to say, because it’s not easy to track exactly how much Crossroads, Americans for Prosperity, and similar groups are spending on different kinds of advertising.

But these politically influential organizations are moving more of their efforts online.

While Crossroads spokesman Jonathan Collegio said he couldn’t get into the specifics of their budget, “Crossroads will certainly spend more in the online space in 2012 than it did in 2010,” he said.

Americans for Prosperity did not return multiple requests for comment.

Even when Internet users are sophisticated enough to spot a targeted ad, as Lauren Berns did, it is almost impossible for them to find out why a certain organization is targeting them—or what data about them is being used.

Berns, for instance, is a registered independent from St. Petersburg, Florida—exactly the kind of voter whose opinion campaigns and political groups are trying to sway before November.  He’s a self-described “news junkie,” who reads both liberal and conservative news sites and posts articles to Facebook two to ten times a day. But it wasn’t clear what part of his Internet behavior ad triggered the Crossroads ad—or whether information about his offline life was part of the targeting formula. Had he been shown the Crossroads ad because he had visited Mitt Romney’s site? Because he regularly reads the conservative sites of The Daily Caller and The Weekly Standard? Because he lives in a swing state? Did Berns fit the profile of a potential Crossroads supporter because he’s a 44-year-old who travels regularly? Or because he shares things with his friends, thus making him a potential “social influencer?”

A popup message accompanying the ad offered information about the targeting. But it only explained, “We select ads we believe might be more relevant to your interests.” 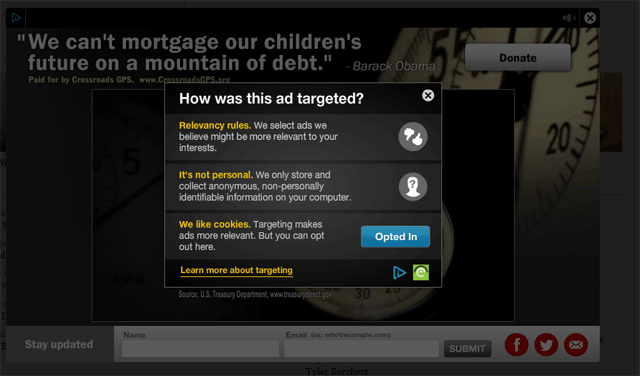 The popup in the ad Berns received.

When we sent Crossroad’s Collegio a copy of the ad, he said he could not explain exactly how the ad had been targeted, saying, “it’s a matter of strategy that we would hold close to our chests.”

But he did offer one potential targeting factor. “We are looking for viewers who are more likely to engage their lawmakers in an issue advocacy campaign, and those are generally viewers who visit news and current affairs websites,” Collegio said. If Crossroads GPS was looking to target news junkies, then Berns was the kind of person they were trying to reach—although, of course, that didn’t necessarily mean he was sympathetic to the ad’s message. Berns regularly reads conservative sites and says he is skeptical of both parties, but on policy issues, he says, he lines up more closely with the Democrats.

Because Crossroads wouldn’t disclose their targeting strategy, we can’t know how many other factors may have been involved. Collegio would not say whether the online ad was only sent to viewers in certain states.

Television ads from dark money groups often get significant media scrutiny.  When Crossroads GPS launched a television ad in early June attacking President Obama’s “reckless spending,” the group’s $7 million ad buy made headlines in papers across the country. The Washington Post fact-checked the ad’s claims, and concluded that the ad contained both exaggerations and omissions.

What didn’t get mentioned, by newspapers or by Crossroads’ own press release, was that an online version of the same ad—the ad Berns saw—would appear on the computer screens of select individuals, based on their Internet habits. Collegio said it was “likely an oversight” that the Crossroads press release didn’t include a description of the online part of the ad campaign.   But, he noted, “When we announce online buys, the media rarely report on it.”

By their nature, targeted online ads are harder for news organizations to track, since they are only shown to some users, and will never appear to others.

This makes targeted ads much less transparent than TV ads, and makes it harder to tell if politicians or political groups are using targeting to pander to certain groups of voters, or whether they’re sending out ads that are misleading, hypocritical, or just plain false.

Another targeted dark money ad came from a woman in Wisconsin, who asked that her name not be used. She sent screenshots of a targeted ad from the Koch-linked Americans for Prosperity attacking Wisconsin Democratic congresswoman Tammy Baldwin, who is now running for Senate. 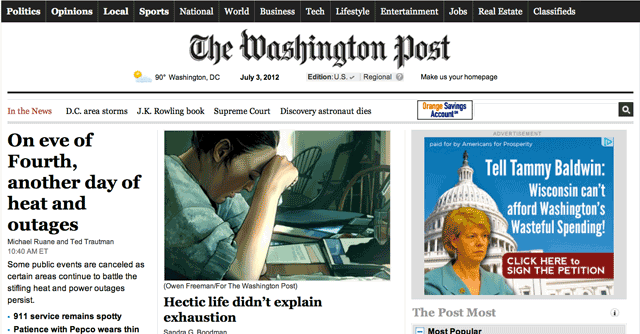 The Americans for Prosperity ad on the Washington Post's site.

The ad, which reads, “Tell Tammy Baldwin: Wisconsin can’t afford Washington’s wasteful spending!” asks viewers to “Click here to sign the petition.” The ad appeared on multiple sites the woman visited, including in a prominent place on the home page of the Washington Post. While Americans for Prosperity did not return requests for comment, a Washington Post spokeswoman said a broader Americans for Prosperity ad campaign had been taken down because it had not been approved by the Post’s advertising team. While many critics of targeting have been concerned that political groups might use targeting to send out controversial ads without attracting attention, that wasn’t the case with the two ads our readers spotted. The targeted ads from both groups sent the same message as their spots shown on TV.

A survey of 1,503 adult Internet users released this week by the Annenberg School for Communications found that 86 percent of the respondents did not want “web sites to show you political ads tailored to your interests.” Most respondents also said they want to know what the campaigns know about them.

In general, Berns said, “I’m fine with targeted advertising. If I’m going to see ads on the Internet, I’d rather they be something I’m interested in.” But, he said, he draws the line at politics.

“I'd much prefer a world where candidates tried to equally hard to reach everyone, present their policies rationally, and let the chips fall where they may,” he wrote in an e-mail.

“Targeting by political viewpoint is ‘creepy,’” he wrote. “A little too close to propaganda techniques for my comfort.”

Have you seen a targeted political ad?

Help us find out how politicians are targeting you online.

If the ad asks you to “learn more,” visit a website, donate, or sign a petition, please send us a screenshot of that site or petition, as well. (The page where the ad sends you may also be targeted to what advertisers know about you.)

Not sure how to take a screenshot? Here are the instructions if you're using a PC, using a Mac, or using a smartphone.

You can also check out our "Message Machine" project, which analyzes how campaigns are targeting voters with different e-mail messages.