We're trying out a new feature called Decoder, in which we answer questions about accountability stories in the news. If you have a question you’d like answered, let us know. 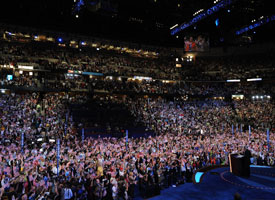 In the wake of countlessnewsstories about influence peddling at the Republican and Democratic national conventions, we thought it was fair to ask, just what are the rules -- and loopholes -- that govern the financing of these conventions? Why are hamburgers outlawed, but million-dollar donations allowed?

The activity of lawmakers, lobbyists, donors and political parties at the conventions is regulated by two pieces of legislation: the Federal Election Campaign Act of 1971 (and subsequent amendments, particularly the 2002 McCain-Feingold Act) and the Honest Leadership and Open Government Act of 2007.

The Federal Election Campaign Act (FECA) established a public financing system for the conventions that was meant to cover close to the total cost.  But public funding has fallen far short of covering the cost of recent years' increasingly lavish conventions. So it is supplemented -- utterly eclipsed in fact -- by outside donations.

This year, the Republican and Democratic conventions each received $16.4 million in public financing and raised an estimated total of $112 million in soft money donations between them. Soft money, funds to which Federal Election Commission restrictions do not apply, cannot go directly to the political parties to pay for the convention; that would violate FECA rules. Instead, the Commission allows these large-scale donations to be steered into "host committees."

Often it amounts to no more than a separate bank account, says Meredith McGehee at the nonpartisan Campaign Legal Center. They're "essentially an arm of the party." For instance, some of Barack Obama's top staffers have helped the Denver host committee solicit funds for this year's Democratic convention, offering donors perks like skyboxes for the acceptance speech.

In this way, corporations -- which have donated 80 percent of the $112 million in outside funding -- are basically bankrolling this year's conventions.

This of course raises concerns about what exactly they expect in return. Well, the Los Angeles Times reports that many of these donors - particularly corporations and unions - have business pending before congressional committees and regulators. For instance, the largest donor to both conventions, Qwest, is currently appealing a far-reaching case before the Federal Communications Commission.

(A Qwest spokeswoman told us that the company's support was part of an effort to increase its brand visibility to the international audiences the event attracts, not to influence its treatment in Washington.)

The Honest Leadership and Open Government Act was enacted last year to address potential conflicts of interest by policing the relationship between lawmakers and lobbyists, or companies that employ lobbyists. Its provision outlawing gifts from lobbyists to lawmakers includes the parties thrown at the conventions. But the law is riddled with loopholes, which the Senate (PDF) and House (PDF) ethics committees helpfully highlighted in letters sent out to lawmakers earlier this year.

Lawmakers are exempt from the party ban if the party is for a charity (thus proceeds from a celebrity-laden poker tournament ($) thrown by the Poker Players Alliance will go to the Paralyzed Veterans of America), if it is a "widely-attended event" (where there are at least 25 non-congressional attendees and the lawmaker's attendance is related to his or her official duties) or if it is a reception (food must be an hors d'oeuvre, not a meal, a.k.a. the "toothpick rule").

In addition, a member of Congress cannot attend a party in honor of him or her. But the House has an exception to this rule that the Senate does not: A member can attend as long as the party honors a group of members rather than one specific member. The House is also laxer on the timeframe of this rule. It limits its application to the formal dates of the convention, not the party weekends that sandwich it.

So while ethics regulations are more stringent - and complicated - than ever this year, the reports of congressionalpartying on special interests' dime  that are already pouring in from the Democratic convention seem to indicate that lawmakers, lobbyists and donors have already found ways to sidestep them.

Public Citizen has compiled some helpful resources to learn more.