A version of this story was co-published with Salon. 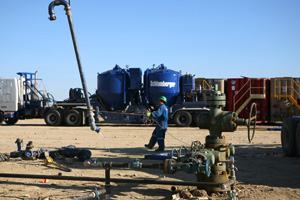 Legislators who've been pushing a bill to regulate a controversial natural gas drilling process are now calling for further scientific study, a change in tack made under intense lobbying pressure and after a personal request from Colorado's Democratic governor.

If the lawmakers wait for the results of a study, the bill is unlikely to move forward any time soon.

Rep. Diana DeGette, D-Colo., and Rep. Maurice Hinchey, D-N.Y., two of the sponsors of the so-called FRAC Act (PDF), a House bill that would establish federal environmental controls over the process of hydraulic fracturing, are now calling for committee hearings and renewed research into the environmental impacts of the drilling method. Last month, Hinchey attached a provision authorizing funding for such a study to a House appropriations bill.

In an interview this week, Hinchey told ProPublica he is not backing off the FRAC Act. He said he is concerned about new reports of water contamination from drilling and thinks a study could bring those incidents to the forefront of the debate.

"What we want to do is make it clear what is going on," Hinchey said. "The appropriations bill is an incremental step. It will continue to focus attention on this."

Asked whether the FRAC Act is losing momentum, Hinchey pointed out that the bill now has 13 sponsors, 10 more than it had in June. But he acknowledged that the energy industry's opposition to the bill has swayed some members of Congress. "It's not moving forward with the rapidity that I would like to see it move forward," he said.

That may be in part because of the difficulties of bringing diverse perspectives together on energy and economic issues, including within the Democratic Party.

In a speech Thursday before the Colorado Oil and Gas Association, a prominent industry trade group, Colorado Gov. Bill Ritter, a Democrat, assured the group of his support for the natural gas businesses and said he had asked DeGette not to pursue the legislation.

"I encouraged Congresswoman DeGette to consider authorizing a comprehensive study of this issue instead of going directly to a new and potentially intrusive regulatory program," the governor said. "She agreed at that time to go instead to something that would be more in the way of a study instead of an amendment that would prescribe a certain way of every state having to put in place these rules. I thank the congresswoman for having done that."

DeGette, who has been trying to pass fracturing legislation since 2005, confirmed through a spokesman that she and the governor had spoken last month, but said that she had not agreed to abandon the legislation.

"She understands his concerns," said her spokesman, Kristofer Eisenla, "but all options remain on the table. She is moving forward with a potential hearing, and with a study which she would welcome the industry to be a part of."

In an earlier interview, Eisenla said that the information campaign undertaken by the bill's opponents had surprised legislators and slowed their progress.

"The oil and gas guys came out of the barn storming," he said. "I think that opposition has been throwing out scare tactics and mischaracterizations of what she is trying to do."

At least five reports (PDF) have been issued since January arguing that the proposed legislation -- which would give the Environmental Protection Agency authority to investigate fracturing accidents and to dictate how the process is done -- would hamper exploration (PDF), raise fuel prices and cost Americans jobs and energy.

The industry maintains that state regulations already protect drinking water from hydraulic fracturing, a process that forces vast amounts of water laced with chemicals underground to break up rock and release gas. In Thursday's speech, Ritter touted Colorado's new rules as an example of strong state regulation, and later that day an industry group sent out a news release underscoring his statement. What neither mentioned at the time: the Colorado Oil and Gas Association is suing Colorado to block those rules.

The reports supporting the industry's arguments were examined in a recent article by ProPublica, which found that the economic assessments were exaggerated and based in part on 10-year-old data (PDF). Three of the reports were paid for by the Department of Energy but produced by consulting firms that also work for the oil and gas industry. One of the DOE reports (PDF) was written by the same person who produced a study for the Independent Petroleum Association of America -- and bore a nearly identical cover.

The oil and gas industry has spent millions of dollars lobbying against fracturing regulation over the last two years. In May, it launched a Web site that disputes criticism of industry and argues against regulation.

As a result, Eisenla said, the true content of the FRAC Act and its implications for the oil and gas industry have become muddled in a thicket of rhetoric and misleading data.

The bill proposes to remove an exemption that was written into the Safe Drinking Water Act (SDWA) in 2005 that says hydraulic fracturing is not subject to regulation. It would also require drilling companies to disclose the names of the chemicals they pump underground, information that is currently a protected trade secret. If the act is passed, hydraulic fracturing would be governed by the portion of the SDWA that controls what is injected into underground wells and how it is done.

According to the EPA, the oil and gas industry is the only industry exempted from oversight under one of the nation's landmark laws to protect drinking water.

Representatives of the energy industry say the 2005 legislation wasn't an exemption as much as a clarification of the law. They maintain that the Safe Drinking Water Act didn't explicitly apply to hydraulic fracturing until 2001, when the 11th Circuit Court of Appeals forced the EPA to oversee the process in Alabama. At the time the EPA wasn't using the SDWA rules to monitor hydraulic fracturing, then an emerging technology.

Whether the EPA applied the SDWA to fracturing or not, prior to 2005 it had the authority to do so, according to the agency's former assistant administrator for water, Benjamin Grumbles. Now it does not.

Industry analysts, including at the American Petroleum Institute, maintain that hydraulic fracturing shouldn't be subject to Safe Drinking Water Act regulations that address injection disposal, because the fluids aren't disposed of underground. But the analysts also acknowledge that 30 to 70 percent (PDF) of fracturing fluids can be left underground after the process is completed, and that hydraulic fracturing with chemicals is far more prevalent today than when the Safe Drinking Water Act was written or when courts were examining the issue in Alabama.

The language of the SDWA explicitly gives states authority to enforce the law as long as they meet basic federal criteria. So if federal authority is restored, state regulations would be superseded only if the EPA deemed them insufficient.

The proposed bill would not ban hydraulic fracturing. Nor does the bill, or the Safe Drinking Water Act, require the expensive processes that one industry report said it does.

"Because there has never been any federal regulation of hydraulic fracturing, we have to make some assumptions based on what could be done," said Lee Fuller, vice president for government relations at the Independent Petroleum Association of America. "It's an educated guess based on what the history of regulation has been and the kinds of requirements they would plausibly think that the EPA might require."

Several industry representatives have told ProPublica that what is really driving their opposition to the FRAC Act is their worst fear: that if EPA authority is restored, a suite of lawsuits from environmental organizations will follow, forcing the agency to issue tougher regulations -- possibly even creating a new class of laws for fracturing -- and grinding business to a halt while the issues play out in court.