The effort targets the authority of the Army Corps of Engineers, which oversees the nation’s federal levees — large hills that are typically built or strengthened by the Corps and are subject to its rules, but are managed by local drainage districts. Any time a district wants to permanently raise the height of a levee for more protection, it has to seek approval from the Corps, which considers whether a request would be “injurious to the public interest” before issuing a Section 408 permit.

The process is intended to prevent “levee wars,” in which communities race to build ever-higher levees at the expense of their neighbors. Levees constrict rivers, narrowing them and blocking off the floodplains that allow the water to spread out. This bottleneck effect ensures that towns with lower levees are more likely to flood.

But since mid-2016, lobbyists and attorneys working for a group called the 408 Coalition have spent at least $230,000 in taxpayer money to weaken the Army Corps’ authority to limit levee heights and influence the agency’s funding, according to thousands of pages of coalition documents and correspondence obtained by The Telegraph of Alton, Illinois.

An analysis of the records by The Telegraph, ProPublica and Reveal from The Center for Investigative Reporting shows coalition members held dozens of meetings with top Army Corps officials and congressional staffers between October 2016 and last fall. Aided by lobbyists and lawyers at the Missouri-based law firm Husch Blackwell, the coalition provided Congress members with white papers on their legislative goals and drafted text for pending bills.

The records reflect that the coalition’s most prominent backer is the Sny Island Levee Drainage District, which manages a 54-mile levee system along the Mississippi River in west-central Illinois.

The Sny has long flouted the Corps’ restrictions on levee height. It pushed up its levees a decade ago without federal permission, and since then, residents across the river in Pike County, Missouri, have blamed the higher barriers for worsening floods that inundated farms and closed businesses in the riverfront towns of Clarksville and Louisiana.

A new analysis of Corps data shows that, by protecting itself, the Sny district has increased flooding upstream and in Pike County.

“In my estimation, every day [the Sny is] in violation of the law,” said Pike County emergency management director Al Murry. “And there’s nothing being done.”

The Corps responded to the Sny’s disregard for its rules in 2015, disqualifying the district from a Corps-funded levee repair program.

The 408 Coalition appears to have been spearheaded by Sny officials with the goal of rallying at least 11 levee and flood control districts in the Midwest and South to fight what they see as federal overreach.

So far, records show, the coalition has taken credit for preventing legislative action that would have expanded the Corps’ authority over levees.

The effort’s ambitions are far larger, however — and perhaps achievable with help from a sympathetic White House, which included a proposal giving local levee managers an easy path to taking levees out of Corps jurisdiction in its larger infrastructure plan. The 408 Coalition’s ultimate goal, the documents show, is nothing short of a “permanent solution” under which the Corps no longer has a role in limiting the heights of levees managed by local officials.

“We had a lot of traction in fact on 408,” Husch Blackwell attorney David Human wrote to a coalition member in March 2017 after a trip to Washington. “We heard from a senior official from Corps Headquarters that ‘408 is on a death spiral.’ We can only hope.”

It’s impossible to tell from federal lobbying disclosures who is part of the 408 Coalition. The group operates with little public disclosure. It has no website, nor has it publicized its campaign. When the Telegraph reporter made a public records request to the coalition, he was told they didn’t have to grant it, because the group exists in name only and doesn’t keep records.

All that was apparent by the fall of 2017 was that the group had hired a litigation and business law firm, Husch Blackwell, that specializes in levees and flood protection, and was paying it for lobbying related to Section 408 permitting.

It was only when the reporter guessed that the Sny might be involved, and filed a request to the government levee district for documents including invoices and emails, that a picture began to emerge. Requests sent to additional levee districts, including those mentioned in the Sny’s correspondence, revealed a list of 11 local government agencies that took part in coalition activities. The documents suggest another 12 levee districts could belong to the coalition. Husch Blackwell attorneys declined to identify them.

Around the time the reporter began making records requests, descriptions of work on the coalition’s invoices became terse. Entries that had previously contained long narratives about coalition lobbying trips now used vague phrases such as “Work on permit issues.” On top of the $230,000 reported to Congress, invoices from individual districts show an additional $98,000 paid to the firm for work on lobbying-related business.

The group’s main argument is that because Section 408 was written in 1899, when the Corps wasn’t responsible for flood control, the Corps has no authority to use 408 permits when levees are already managed by local districts. Instead, the coalition wants the Corps to use a 1944 statute written for flood control — one that doesn’t mention “the public interest.”

The 1899 statute specifically mentions levees, and an Army Corps spokesman said there’s “no evidence that Congress ever intended the law to be narrowly applied.”

Husch Blackwell attorney Karin Jacoby outlined an initial strategy for the coalition in July 2016: the law firm would arrange meetings with Corps leadership and seek to influence the Water Resources Development Act of 2016, a biennial bill from Congress that sets Army Corps priorities and policies.

Jacoby estimated it would take about 300 hours and cost $100,000. “It is doubtful that a smaller effort could be as impactful as need be,” she wrote.

By August, the firm was recruiting levee districts, explaining that the coalition — and not its member districts — would be listed as a client in lobbying disclosure forms.

The coalition considered two amendments to the water resources bill particularly troublesome, because they included language that Jacoby believed could strengthen the Corps’ power over levees. Neither made it into the final law, and, in a February 2017 email to coalition members, Jacoby declared their work a success in preserving “the status quo.”

One of those amendments came from a Louisiana Republican, Rep. Garret Graves, a second-term congressman who previously led post-Katrina levee building efforts in his home state. He’s been a critic of the Corps, saying its bureaucracy has created dangerous delays for communities waiting on critical flood control projects.

In an interview, Graves wouldn’t credit the coalition with single-handedly influencing the bill, but he praised its work.

“The 408 Coalition is attacking a real injustice,” he said. “They do have a strong voice. They’re well organized. There’s a lot of merit to their concerns, and they’ve brought forth some good solutions.”

Graves agrees with the coalition that the Corps “invented this interpretation” of Section 408; he sees promise in finding creative ways to fund levee improvements that simply cut that agency out of the process. 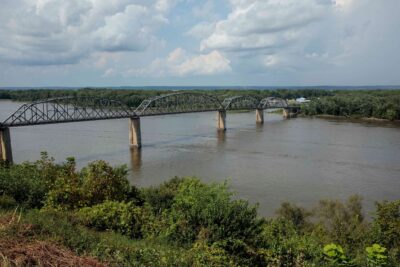 The coalition signaled its admiration for Graves’ work in September 2017 by inviting its members to a fundraiser for the congressman at the Capitol Hill Club in Washington.

The group also distributed its talking points to two White House infrastructure experts last March, about a year before the Trump administration released the infrastructure plan that proposed simplifying the process for taking levees out of the federal system.

One of the experts, D.J. Gribbin, is a top White House infrastructure advisor. Gribbin said the idea wasn’t inspired by the coalition, but by a desire to give communities more flexibility to manage their infrastructure. “Nothing in this document is designed to impair public safety,” and it’s up to Congress to hash out the details, Gribbin said.

According to federal lobbying disclosures, the 408 Coalition officially disbanded at the end of 2017. However, around that time, several coalition members including the Sny signed on for Husch Blackwell lobbying services under their own names.

The biggest contributor to the coalition, the Sny, appears to have paid about $165,000 between November 2016 and September 2017 — about 8 percent of the Sny’s annual budget — under an existing legal services agreement with Husch. One commissioner for the Sny, Russell Koeller, was surprised to learn from reporters how much had been spent.

“It shocked me when I read that because I just did not think it was that high,” Koeller said.

In a later email, Koeller said the district hadn’t spent all that money challenging the Corps’ 408 authority. “Much of our effort with government officials concerns other items,” including federal flood insurance, environmental regulations and local dams, he wrote.

Koeller said he was confident the Sny was getting good value for its money.

“That’s the kind of a firm that you need to go to, and that doesn’t come cheap,” he said. “They’re expensive people. And these complex issues take a huge amount of time and research. You can’t just call them up on the phone and get an opinion. It doesn’t work like that.”

Sny levee representatives say they are victims of regulatory overreach. “Our primary concern with Section 408,” Koeller explained in an email, “is the completely incorrect interpretation of a very old navigation regulation that for over 100 years never, ever applied to levee height and in fact was illegally applied retroactively to us and other levee districts … of course we are trying to correct this!”

Scott Whitney, a flood risk manager at the Corps’ Rock Island, Illinois office, said he’s sympathetic to the challenge of navigating state and federal regulations, but that’s no excuse for non-compliance. The Corps’ levee safety program has gotten more stringent since Hurricane Katrina, “for good reason,” he said.

As for the work ahead for officials who participated in the coalition, Husch Blackwell attorney Jacoby told one levee official in July 2017 that the group would focus on the next version of the Water Resources Development Act. Lawmakers have begun hearings but have yet to file that bill, which could change how the Corps enforces limits on local levee districts.