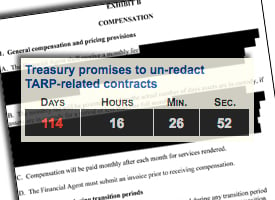 Nearly four months after the Treasury Department named Bank of New York Mellon its chief contractor for the taxpayer-funded bailout, we finally know how much money it's paying the bank.

New York Mellon is estimated to receive about $20 million, far more than any other bailout contractor, to keep the books for the governmentâs Troubled Asset Relief Program (TARP).

The disclosure came not from Treasury, but from the governmentâs watchdogs.

Treasury has still redacted the compensation figures and other terms of the deal from the publicly released copy of the contract, which it issued in October. At the time, Treasury officials said it would only be a matter of weeks before the details were released.

This estimate led us to wind up the ProPublica Promise Clockâan effort to track how long it would take the department to release the figures.

The $20 million figure appeared in a GAO report issued late last month, and was first noticed by BailoutSleuth.com.

But the government is not wedded to giving the bank $20 million.

âTreasury has calculated what they expect the value to be,â said a spokesman for the bank, Kevin Heine. Heine added that the $20 million was not finalized and could change.

In just over two months on the job, according to a report yesterday from the TARPâs special inspector general, the bank already has received more than $4 million from the government to track and hold TARP assets. The bank also is responsible for actually cutting checks to the financial institutions approved for investments.

At one point, the bank had a minor slip-up.

The special inspector general âs report revealed that the bank made an error in releasing bailout funds to GMAC after closing documents had been signed but before receiving approval from Treasury.

A Treasury spokesman didnât immediately return our calls for comment today. The report added that the mistake didnât appear to have resulted in any loss of funds.

So why has Treasury itself not released the information?

In November, Treasury spokeswoman Jennifer Zuccarelli explained that the department does not want to reveal the financial terms of the three-year deal while other contracts related to the bailout are being negotiated. "We don't want to put ourselves at a competitive disadvantage," she said.

Itâs unclear, however, whether any outstanding contracts remain.

So long as the contract remains blacked out, we will keep alive the tick-tock of the Promise Clock.