A Florida state court judge rejected a new trial for a man convicted of physically abusing his son, and harshly criticized the testimony offered on his behalf by two doctors who have served as expert witnesses for hundreds of people accused of child abuse.

In denying James Duncan’s bid for another trial, Circuit Judge Michael Andrews found that the doctors — David Ayoub and Marvin Miller — promoted a “fringe opinion,” offered theories that were not believable and have never in hundreds of cases attributed a child’s injuries to abuse.

“This Court is challenged to believe that any jury, presented with these revelations, would believe that either doctor’s opinions are credible,” Andrews wrote in his 26-page ruling Tuesday.

Ayoub’s work as an expert witness was the focus of a story published last month by ProPublica and The New Yorker. The Springfield, Illinois, radiologist used to be active in the anti-vaccination movement before switching his attention to child abuse allegations.

Ayoub believes that many cases of fractured bones attributed to child abuse can instead be explained by infantile rickets, a rarely diagnosed bone disease. The disorder, which is usually caused by a severe lack of vitamin D, could result in fragile bones that break from the normal handling of a baby, according to Ayoub.

Ayoub and Miller did not respond to requests for comment on the judge’s decision. Ayoub has told ProPublica that his testimony in each abuse case is based on a careful review of the medical evidence, and that he does not charge for his services as an expert witness. “Parents are being accused and families torn apart based on fractures and/or other boney irregularities that are in fact attributable to bone fragility, not abuse,” he said in an email.

Miller, a pediatrician and geneticist at Dayton Children’s Hospital in Ohio, has worked as a defense expert in child abuse cases for more than two decades. In a June interview with ProPublica, he said he does expert defense work because the “playing field is so unlevel” and many suspicious fractures are not child abuse. “It irritates me to no end that my own profession would allow these incredibly perverse outcomes to happen,” he said.

Duncan’s attorney, Lisabeth Fryer, could not be reached for comment on whether the ruling will be appealed.

The events in the case date back a quarter century to 1993, when 2-month-old Kody Duncan was hospitalized with multiple broken bones. Three years later, his father was convicted of 13 counts of aggravated abuse and sentenced to 70 years in prison.

In 2015, lawyers for Duncan filed a motion to reopen the case, citing a 2014 medical journal article co-authored by Ayoub, Miller and others that argued a type of fracture commonly associated with child abuse was often the result of infantile rickets. Duncan’s lawyers contended that the article was new evidence that helped prove his innocence.

During a daylong hearing conducted by Andrews in October in Clearwater, Florida, Ayoub testified that his review of the Duncan case indicated the baby likely had rickets and perhaps other deficiencies that could explain the injuries attributed to abuse. Miller offered similar testimony. Ayoub said fractures of the baby’s skull, collarbone and ribs may have occurred during birth, when a suction device was used. Other injuries, including fractures of the left arm, shinbone and thighbone likely occurred when the baby was restrained while being vaccinated, Ayoub testified.

The judge dismissed those explanations. In particular, he found the vaccination scenario difficult to accept.

“This Court does not believe that jurors, using their life’s experience and their common sense would believe that (the baby) was ‘held down’ while being given a shot or that his leg was broken in the process,” Andrews wrote.

The doctors who initially treated Kody Duncan in 1993 considered, but then ruled out, the possibility that a condition like rickets could be involved, according to testimony at the hearing. Experts for the state, including a doctor who evaluated Kody Duncan at the time of his injuries, testified that rickets is a systemic disease that affects bones throughout the body. Kody Duncan, however, only suffered injuries on his left side. In addition, there was no evidence he suffered from a lack of vitamin D and lab results indicated he had had normal calcium levels, the judge wrote.

Now a 25-year-old tennis coach at a Pennsylvania college, Kody Duncan is championing his father’s release and testified for him at the hearing. An hourlong CNN special on the case, which included an interview with Ayoub, aired this year.

Andrews concluded a new trial was not warranted because Duncan failed to produce new evidence that would likely result in his acquittal. The 2014 article, the judge wrote, represented a fringe view that is not generally accepted in the medical community. “What Defendant asserted in his motion as ‘ground breaking’ is not ground breaking but instead a difference of opinion,” the judge wrote of the paper.

Andrews noted that Kody Duncan didn’t suffer any fractures after being separated from his father, “further undermining the theory of (Kody) having brittle bones or vitamin D deficiency.”

The judge also concluded he could not believe Ayoub and Miller were objective in their testimony. 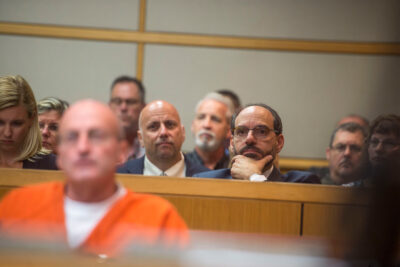 “Between the two of them, they have testified in nearly two hundred cases where there was alleged child abuse,” Andrews wrote. “Collectively, they have reviewed thousands of x-rays. And yet, not once, in nearly two hundred cases, has either defense expert found a case where child abuse was the cause of the child’s injuries. In the years each has served as expert witnesses there has not been one case of broken arms, ribs, clavicle, legs or fractures of the skulls, which either doctor has found to be the result of child abuse. The revelations exceed the limits of credulity.”

Since 2008, the 59-year-old Ayoub has testified on behalf of those accused of child abuse in the U.S., Europe and Australia. Prior to his work as an expert witness, he was a prominent figure in the burgeoning movement that blames the rise in autism on vaccinations that contain mercury, aluminum and other substances. Ayoub has said his criticism of vaccines is no longer a significant part of his work and has no bearing on his credibility as a witness in child abuse cases.

In the Duncan case, an attorney for the state attempted to question Ayoub about his anti-vaccination work but was stopped by Andrews, who ruled it was irrelevant after one of Duncan’s lawyers raised an objection.

Beginning in the 1990s, Miller was a leading proponent of the notion of Temporary Brittle Bone Disease, which was said to cause fragile bones in the first several months of life before spontaneously resolving itself. It purportedly explained why some children who suffered fractures as infants had no similar injury after they were moved out of the home where they were allegedly abused.

In the mid-2000s, three medical societies found there was no scientific basis for the condition and the Scottish doctor who initially popularized the concept was stripped of his medical license. Miller, in a telephone interview this year, said he still believes the condition is legitimate but no longer references it by that name when testifying in child abuse cases.