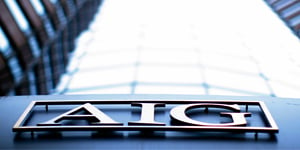 Since AIG's bailout, the company has forked over $52 billion to Goldman Sachs, Deutsche Bank and others who bought credit default swaps. The payments have raised a chorus ofdisapproval, with many arguing that AIG's new owners -- that'd be taxpayers -- shouldn't be paying out the full contracts.

Treasury Secretary Timothy Geithner has countered that the government's hands were tied and AIG had no choice but to pay out the full value of the swaps, which are complicated financial bets that often function like insurance but can also be more like a bet with a Vegas bookie.

"We came into this crisis as a country without the tools necessary to contain the damage of a financial crisis like this," Geithner told George Stephanopoulos on ABC's "This Week." The government, he said, "had no meaningful ability to come in [and] change contracts where necessary."

Geithner went on to tell Stephanopoulos he is asking for more authority to renegotiate such payouts in the future, but the question asked by members of Congress, expert observers and plenty of disgruntled taxpayers remains: Did Geithner really have to pay out on the contracts at full value?

Though the $52 billion is already out the door, the debate is much more than academic. AIG has said it has hundreds of billions of dollars more in overall exposure with counterparties.

It turns out, Geithner does have options -- but each carries risks.

Part of the problem is though the federal government now officially owns about 80 percent of AIG, it has been struggling to avoid the appearance of actually taking control, said Roger J. Dennis, a dean of the law school at Drexel University. "They're not managing AIG, so they can't really go in and order AIG's management to say, 'As you unwind these swaps, force the counterparties to take a haircut.'"

Of course, given that AIG is relying on the government for a lifeline, can't Geithner engage in some more informal type of persuasion?

"Clearly he could have gone in and as a practical matter jawboned the AIG people to try to get haircuts," Dennis said, using an industry term for getting discounts on contracts. "But could he have ordered them? Under the current conditions, probably not."

Another option is to break the contracts and let the counterparties -- many of which are themselves beneficiaries of federal bailouts -- sue the federal government, if they dare.

"I don't see why it would have been necessary to pay out to the counterparties at all," said Timothy Canova, a professor of international economic law at Chapman University in California.

Such a suit may not fare well in court because some legal questions swirl around whether the bulk of credit default swaps are legally enforceable.

Some of the swaps function like insurance policies on corporate bonds. Purchasers of such credit default swaps know that even if the bond issuer defaults, they will limit their losses. But many other swaps are more like bets (akin to buying "insurance" on another person's house), and it is unclear from a legal perspective if there is enough of an insurable interest to make the contracts enforceable.

"I say let them litigate it and let the courts decide whether they have any kind of insurable interest," Canova said.

If the federal government is willing to renegotiate contracts with, say, the United Auto Workers, it should also be willing to force haircuts on elite institutions, Canova added.

"The Treasury is willing to exercise its muscle to change contracts with ordinary workers," Canova said, "but when it comes to gambling debts for Wall Street, those are somehow sacrosanct."

A third option, advocated most prominently by Lucian Bebchuk, director of the Program on Corporate Governance at Harvard University, is for AIG to simply file for Chapter 11 bankruptcy. A bankruptcy court would then have powers to renegotiate the company's swaps and demand substantial concessions from counterparties.

Of course, just because Geithner can exercise these options, does not mean they're a good idea.

There's no equivalent to an open stock exchange for credit default swaps, meaning no one knows how far-reaching the effects of AIG's refusal to pay all or some of its obligations would be.

"Many people think the domino effect is overstated," said Burt Ely, president of Ely and Company, a financial services consultancy, referring to the idea that stopping the payments could in turn topple firms AIG made deals with. "But the problem is, no one knows."

It's also unclear how to prioritize the many different kinds of counterparties AIG may have, said Dennis of Drexel University.

Would you, for example, force the same haircut on state and local governments as, say, Deutsche Bank?

"If you start to push people to take haircuts, even if they don't take deep ones, it creates the kind of uncertainty in the marketplace that the bailout was supposed to ameliorate," Dennis said.