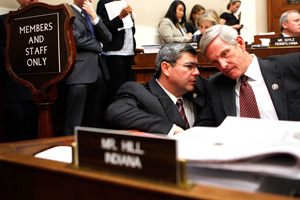 The drug chain that bought a pharmacy from Rep. Mike Ross, D-Ark., in 2007 has released a two-page summary (PDF) of the transaction, revealing for the first time the exact amount that Ross and his wife, Holly, received -- $1,254,420.10.

Previously, public documents had only provided a range: $1 million to $1.67 million.

Ross asked USA Drug to release the information in response to a story published Tuesday by ProPublica and Politico that raised questions about the real estate portion of the sale. Ross declined to be interviewed for that story.

"This should certainly clear up any misunderstanding the press may have about our transaction," Joe Courtright, president and CEO of USA Drug, wrote in the two-page summary of the business arrangement, which was published on a business Web site.

However, the summary offered no new information about the central question raised by the ProPublica story: How did USA Drug and Ross arrive at the $420,000 price for the building and lot that house the pharmacy at a time when the county estimated the value of both at a combined $263,700?

Real estate professionals in Prescott say property values in the economically depressed community, about 100 miles southwest of Little Rock, have been flat over the past decade, largely unaffected by the wild market swings seen elsewhere in the country. A sawmill that for some 50 years provided many of the town's jobs has closed, and a Firestone plant, the other major local employer, has cut its work force in half.

Courtright's summary did provide new information about the other two components of the pharmacy sale -- the valuation of the business assets and a non-compete agreement benefiting Holly Ross.

USA Drug paid $724,420 for the assets of the business and $110,000 as part of an agreement by the Rosses not to compete in the future against the business being sold, Holly’s Health Mart.

Courtright is on the board of the National Association of Chain Drug Stores, which represents pharmacy interests in Washington, including during the current health care reform debate. Calls to Courtright at his office in Little Rock were not immediately returned.