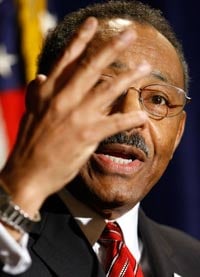 Roland Burris cannot serve in the Senate because his paperwork still is not in order, Assistant Senate Majority Leader Dick Durbin (D-IL) said this afternoon. The Senate won't seat Burris, Durbin said, without the approval of Illinois Secretary of State Jesse White.

Well, Durbin’s condition could prove challenging to meet, since White just reaffirmed his decision not to sign off on the appointment. So after the back-and-forth, things appear to be at a stalemate.

"I want to be clear that I could not and will not in good conscious sign my name to any appointment made by Governor Rod Blagojevich to fill the Senate vacancy," White said in a statement. "This governor was arrested in part for trying to sell this very same senate seat."

In a dramatic display, Senate officials refused to seat Burris earlier this week. Sen. Majority Leader Harry Reid (D-NV) later said the absence of White's signature was a primary reason for denying Burris entry. At issue is what's known as Senate Rule II, which Senate Democrats say requires the signature of the secretary of state to validate an appointment.

But Durbin said this afternoon the Senate "must insist" on its rule.

Burris, for his part, responded to the court decision with his characteristic confidence.

"This appointment meets the qualifications required by the U.S. Senate of all gubernatorial appointees to fill vacated seats," Burris said in a statement. "I am confident I have cooperated with all the requests of the U.S. Senate and I expect they will validate my credentials and seat me in a timely manner."

We’re not so sure, Roland, but we’ll will track this closely and report back when we know more.