A year and a half after receiving a detailed complaint from tribal leaders, the U.S. Department of Education plans to investigate their allegations that the Wolf Point School District in Montana discriminates against Native American students.

In a Dec. 28 letter, sent hours after The New York Times and ProPublica published an investigation into racial inequities in the school district, the department’s Office for Civil Rights notified the lawyer representing the tribal executive board of the Fort Peck Indian Reservation that it would look into the complaint. The board includes members of the Assiniboine and Sioux tribes.

According to the letter, the investigation will focus on whether Wolf Point schools discipline Native students more harshly than white students, shunt them into remedial programs without appropriate cause, and deny them special education evaluations and services. Native American and mixed-race students make up more than three-quarters of Wolf Point’s enrollment.

The department said it will also examine whether the district failed to respond to a parent’s allegations that a Native student was racially harassed. The student wasn’t identified in the tribal complaint or in the letter.

“Tribal children have suffered unfairly for years in the Wolf Point School District,” said Melina Healey, the lawyer representing the tribal executive board. She called for a “swift and thorough investigation that leads to much-needed reforms.”

The Office for Civil Rights is already looking into a complaint by Louella Contreras that the Wolf Point district failed to provide her granddaughter, Ruth Fourstar, with special education services. The department’s decision to look into the tribal leaders’ broader allegations bucks the Education Department’s policy under Secretary Betsy DeVos of pulling back from investigating complaints of systemic discrimination by schools and colleges, and concentrating on mistreatment of individuals. ProPublica reported in June that, under DeVos, the department had scuttled more than 1,200 civil rights investigations that began under the Obama administration and lasted at least six months.

Nationwide, more than 90 percent of Native students attend integrated public schools near or on reservations, which have historically restricted tribal influence over curriculum, funding and staffing. Native American students have some of the worst academic outcomes in public schools: They score lower than nearly all other demographic groups on national tests and less than three-fourths of Native students graduate from high school.

In the early 20th century, white homesteaders prevailed on the federal government to open up unused lands on the Fort Peck Indian Reservation to non-Native settlement. In June 2017, the tribal executive board filed a 46-page complaint that described dozens of instances where Wolf Point schools provided limited academic opportunities and social support to Native students.

ProPublica and the Times found that Native students in Wolf Point are twice as likely to receive at least one suspension compared with their white peers, and white students are more than 10 times as likely to take at least one Advanced Placement course as Native students, according to an analysis of federal education data. In interviews, students, staff and parents said Wolf Point’s schools push Native children into a poorly funded, understaffed program for remedial students and truants. Native students said they were dropped from sports teams after giving birth, while a white pregnant student was not.

The Times-ProPublica investigation also found that some Native students have turned to self-harm and suicide. Three months before the tribal executive board’s complaint, a Wolf Point High School junior killed himself following a public rebuke from the principal for poor attendance, two students said. He was the second student at the high school in seven years to take his own life after being chided by district administrators. 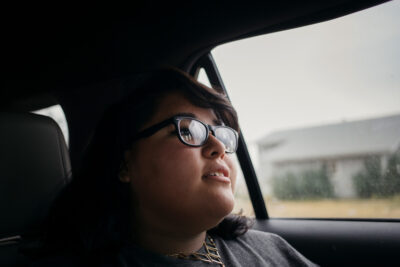 Jeana Lervick, an attorney representing the school district, said the district is closed for the holidays and is unable to comment on the federal investigation. “Wolf Point Schools works constantly to address the challenges facing our students and in particular, our Indigenous students,” Lervick said in an earlier statement. “Our district is aware of historical issues in our nation and as educators do everything in our power to address them.”

The district’s superintendent and the high school principal did not respond to emailed questions.

“Instead of providing a safe learning environment, the Wolf Point School District adds to the long history of educational abuses of our tribal communities,” said Roxanne Gourneau, a former member of the Fort Peck tribal executive board, who has worked to reform Wolf Point schools since her son took his life after being disciplined at the high school. “The school district has done more to fuel Native students’ trauma than to support their education. Change is long overdue.”