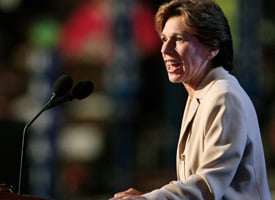 States that bar the use of student achievement data to measure teacher performance may be blocked from accessing a $4.3 billion innovation fund of stimulus dollars, The New York Times and others report. New York, California and other states have enacted such laws, which Education Secretary Arne Duncan says should be reformed. Teachers unions disagree, and Randi Weingarten, president of the American Federation of Teachers, told the Times' Sam Dillon that her union would "take advantage very aggressively of the 60-day comment period" on the administration's proposed rules.

California's stimulus watchdog bared her teeth in an interview with the San Jose Mercury News, warning would-be fraudsters that her office is watching how stimulus dollars are used. The official, Laura Chick, expressed frustration at a culture in Sacramento that runs counter to accountability. "What the state is not used to is watching that money as it goes out," Chick said. "Who's watching those little water district boards?"

The AP reports that Yellowstone National Park has completed its first major stimulus project, resurfacing an 11-mile section of road. The project cost $1.2 million, out of the $14.7 million the park is getting in stimulus money. The National Park Service is getting a total of $750 million from the stimulus package, the AP notes.

Stimulus news meets celebrity news, as Ted Johnson reports in the Huffington Post that Brad Pitt's foundation, Make It Right, is applying for stimulus funding. The foundation is part of a coalition of groups requesting $65 million in stimulus money to rebuild homes in New Orleans. Make It Right is also part of a consortium trying to launch a project in Newark, N.J., to redevelop vacant or abandoned properties, for which it is seeking $45 million; Make it Right's portion of the application is budgeted at $7.3 million.

Are you tracking the stimulus? ProPublica has set up a mailing list for reporters covering the stimulus, and you're welcome to join. You can also help us by signing up for the Stimulus Spot Check, our latest ProPublica Reporting Network initiative.