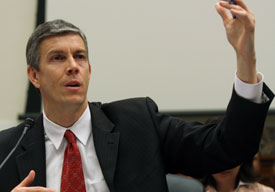 Oh, for shame. Connecticut, Massachusetts and Pennsylvania aren’t following the rules when it comes to spending stimulus dollars on education. And the Department of Education’s inspector general isn’t happy about it. In a recent memo, reports CNN, the three states were called out for using K-12 stimulus funds to fill gaps in their education budgets, among other offenses. These stimulus funds are intended to go to advancing education reforms, increasing teacher effectiveness, implementing statewide data systems and providing support to struggling schools. In a letter to Pennsylvania Gov. Ed Rendell, Education Secretary Arne Duncan wrote that if the state didn’t straighten out its spending of education stimulus money, it could jeopardize its ability to win competitive grants down the road.

There’s more bad news in Pennsylvania. In Philadelphia, less than $1 million of stimulus money has been spent since the program began. But you’d never know that from looking at the state’s Web site, which, reports The Philadelphia Inquirer, says that $8 million has been distributed. The problem boils down to mass confusion. In a letter to Philly’s mayor, city Budget Director Stephen Agostini who is charged with overseeing the stimulus funds, cited a series of problems. City agencies are competing for the same grants, departments aren’t following procedures for central reporting, and grant applications are being sent in without the Recovery Office signing off. Chief among Agostini’s challenges? Getting people to understand that the city does, in fact, have a Recovery Office, with one person – him – in charge of it.

And finally, just two days before the White House is scheduled to release the latest stimulus job figures, USA Today concludes that more than 388,000 jobs have been created or saved by the stimulus. That number comes from a review of reports from 33 states and Puerto Rico. Earlier this month, the White House released its first jobs report, announcing that more than 30,000 jobs were created by $16 billion in funds to federal contractors. The report Friday will provide a more comprehensive accounting.