Newly released documents show the lead detective in an Elkhart, Indiana, police investigation that led to a pair of wrongful convictions was forced to resign because of sexual misconduct with an informant, the details of which the city had failed to disclose for more than 10 years.

The former detective, Steve Rezutko, was the main investigator in the convictions of Keith Cooper and Christopher Parish, a case that was chronicled by the South Bend Tribune and ProPublica last year and was replete with errors by police, the prosecution and judges.

The two wrongfully convicted men had been seeking the documents on Rezutko’s resignation as they pursued lawsuits against the city and individual officers. But they were repeatedly told the documents couldn’t be found, according to trial transcripts and other court records.

The difficulties they faced getting records are similar to those faced by the Tribune and ProPublica. Local government agencies, including the Elkhart Police Department, denied or delayed access to some public records and, in other instances, released files that were incomplete.

Elliot Slosar, Cooper’s attorney, called the city’s failure to disclose the Rezutko records before now “shocking,” and he has asked a judge to issue sanctions against Elkhart in a pending lawsuit.

Slosar said the records on Rezutko — which include one informant’s allegation that Rezutko paid her for oral sex — are critical to Cooper’s claim that he was framed, because the information “undermines Rezutko’s credibility and demonstrates his willingness to induce witnesses and informants to cooperate on cases.”

In the 20-plus years since Cooper and Parish were found guilty in a 1996 robbery in which a man was shot and seriously wounded, the prosecution’s evidence has unraveled while being scrutinized in one criminal or civil proceeding after another. Parish had his conviction overturned and received a $4.9 million settlement. Cooper received Indiana’s first pardon based on innocence and filed a lawsuit of his own.

But one mystery has lingered: Why, exactly, was the case’s lead detective forced to resign in 2001, and where were the records that documented the reason he was pushed out?

Now, the city has disclosed files of two internal investigations that concluded Rezutko had inappropriate sexual contact with informants, at least one of whom he admitted paying.

The city released the files to Slosar this month in Cooper’s ongoing federal lawsuit against Elkhart and several former officers. According to the motion filed by Slosar on Wednesday, the new documents were disclosed by the city’s lawyers on Jan. 4, after repeated letters demanding them.

“Perhaps most troubling of all, the City refuses to provide any explanation regarding its withholding of the documents,” Slosar wrote. “Defendants’ silence is telling, as the withholding is indefensible.”

Vlado Vranjes, the corporation counsel for Elkhart, did not respond to phone and email messages seeking comment.

Martin Kus, an attorney representing Elkhart in the Cooper case, told a reporter on Thursday: “Because it’s pending litigation, I’m not going to talk about it. This will be responded to, and it will be a detailed response. I would certainly invite you to stay tuned.”

When a reporter called Rezutko on Thursday, he declined to discuss the allegations about his conduct, referring questions to his lawyer. That attorney, Andrew Williams, did not respond to interview requests left by phone and email.

Cooper has said he was wrongfully convicted largely because police showed witnesses suggestive photo lineups and obtained a false statement from a jailhouse informant who claimed Cooper confessed to the crime. His lawsuit maintains the Police Department’s policies or practices enabled or condoned misconduct by officers.

By law, prosecutors must disclose information that could undermine the state’s case. Slosar said his law firm is now investigating whether critical records about Rezutko’s misconduct were withheld in other cases where Rezutko’s investigative work and credibility were at issue.

Cooper is seeking either a default judgment in which the city would be found automatically liable, or for a judge to instruct a future jury the city had improperly withheld information about Rezutko’s disciplinary history for years.

In his motion for sanctions, Slosar noted the city had earlier disclosed a summary sheet of disciplinary actions against Rezutko. The sheet listed nine instances in which Rezutko had been disciplined. Seven had descriptive details. Two, Slosar noted, did not.

The summary of a three-day suspension that Rezutko received in 1996 said only: “????” As for Rezutko’s resignation in 2001, the summary said simply: “Charge of Malfeasance Sustained.”

The records released this month fill in those blanks. 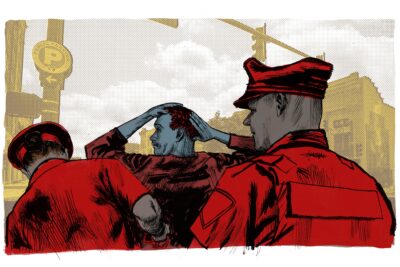 In July 1996, Elkhart’s police chief at the time suspended Rezutko for three days because of “improper touching” with a female informant in Rezutko’s squad car, while he was on duty.

The woman told police that Rezutko touched her breasts and rubbed her leg, and that he placed her hand on his penis.

When questioned during an internal affairs investigation, Rezutko said he was seeking information from the woman about a murder case. He admitted he and the woman touched each other. He said he gave the woman a total of $20, but he “never intended to buy sex or purchase sex.”

“I didn’t know how to remove myself from that situation and keep her calling me with information,” he said. “So, I thought for now, we do a little of this … she’s happy, I’m happy and we go on about our business.”

In the 2001 investigation, a woman who acted as an informant for Rezutko told police that she had performed oral sex on Rezutko for $30 or $40, and that the two had touched each other sexually. Rezutko, when questioned by an internal affairs lieutenant, denied the oral sex, but he admitted the two touched each other when he gave her a ride home one day. “[W]e fondled one another and uh, I let her out in the alley behind her house,” Rezutko said.

He described it as a “quick short thing” and said his actions were “inappropriate.”

When Parish filed his lawsuit in 2007, the lack of documentation about Rezutko’s departure confounded even the judge overseeing the trial.

“We sought the documents. Elkhart didn’t have them,” Parish’s attorney, Jon Loevy, told the judge.

“Somebody has to know why he resigned,” U.S. District Judge Rudy Lozano said.

Rezutko, when deposed in 2008 in the Parish lawsuit, said he was not told of anything specifically he had done wrong — the investigation had something to do with sex, he said — or given the names of those accusing him. But the records released this month show Rezutko was provided names and details.

When the lawsuit went to trial in 2010, the judge granted a request by attorneys for Rezutko and Elkhart to disallow questioning about the officer’s disciplinary history.

In an interview this week, Slosar said his legal team was considering whether to re-examine Parish’s settlement in light of the newly disclosed records from Elkhart: “The real issue would be, by withholding all these documents, did the city fraudulently induce Mr. Parish into a settlement that should have been worth more?”