For the last two weeks, the police chief in Elkhart, Indiana, has been a no-show at various forums where he might have been expected to appear, from civilian oversight board hearings to town hall meetings focusing on the city’s Police Department.

On Tuesday, Mayor Tim Neese confirmed what others had been left to wonder: He had suspended the police chief, Ed Windbigler, placing him on a 30-day unpaid leave. The suspension started Nov. 14, but Neese had made no public announcement. A South Bend Tribune reporter had left repeated messages at City Hall on Monday, asking about the police chief’s status.

Instead of returning the reporter’s messages, Neese went on television Tuesday morning and mentioned, in passing, that the department’s second in command was now serving as interim chief. The television station, WNDU, then reported Windbigler’s suspension for the first time.

The suspension comes after the Tribune, working with ProPublica, obtained a video of two Elkhart police officers punching a handcuffed man in the face. Initially, the officers only received reprimands from Windbigler rather than more serious punishment. After the news organizations requested the video, the officers were charged with misdemeanor battery.

In an email late Tuesday, a spokeswoman for Neese said the mayor had two reasons for Windbigler’s suspension: “failure to promptly notify” the mayor of the beating, and “understating the severity of the incident” to the Police Merit Commission, a civilian oversight board. Windbigler, in June, told the commission that the two officers had gone “a little overboard” when taking the man to the ground, with no mention of the punches thrown.

Separately, ProPublica and the Tribune also have disclosed that 28 of the department’s 34 supervisors have disciplinary records. Fifteen have prior suspensions, including the chief, assistant chief and patrol captain.

At a Nov. 14 town hall meeting, Neese said he disciplined Windbigler for his handling of the officers who punched the handcuffed man. But he did not elaborate or specify what the discipline was.

Jim Rieckhoff, chair of Elkhart’s Police Merit Commission, was unaware as recently as Monday that Windbigler had been suspended. Rieckhoff told a reporter that he did wonder about the absence of the chief at a meeting on Monday, at which the chief’s top assistant appeared in Windbigler’s stead.

Neese has said in “hindsight” that Windbigler should have issued more severe discipline than reprimands to officers Cory Newland and Joshua Titus, who were videotaped punching the handcuffed man Jan. 12 in the police station’s detention area. The mayor’s son, Sgt. Drew Neese, was in the room while the officers punched the man. He walked over and spoke into his radio as the beating ended. Newland, Titus and Drew Neese have not responded to requests for comment.

Windbigler did not respond to an email seeking comment Tuesday, and attempts to reach him by phone were unsuccessful. An email to his work address generated an automated reply, saying, “I am currently out of the office, I will return Monday December 17, 2018.”

Neese also told WNDU on Tuesday that he has asked the U.S. Department of Justice to investigate the city’s Police Department, though he did not elaborate on what exactly he wants investigated. A Tribune reporter’s messages to the mayor’s office, seeking details, went unanswered Tuesday.

This month, Neese asked the Indiana State Police to conduct a “complete investigation” of the city’s Police Department, but last week the state police declined. The review was more suited to the DOJ, the state police said.

The Police Department’s assistant chief, Todd Thayer, is now running the department. He appeared at an Elkhart Board of Public Safety meeting Tuesday morning, when the board approved paid administrative leave for Newland and Titus. Their leave status could change to unpaid, though, after their initial court appearance on Dec. 3 on the battery charge, the assistant chief said.

At its meeting, the Board of Public Safety postponed approval of a new board to review each use of force by the department and to monitor patterns of excessive force. The mayor announced the creation of the board this month, after details of the Jan. 12 beating were published.

Under the proposal, the review board would be made up of five members — and all five would be police officers, including the assistant chief, a captain, an internal affairs investigator and instructors in the use of force and defensive tactics.

Board president Robert Woods asked Thayer to add language to the proposal specifying that civilian members of the city’s Police Merit Commission would work closely with the new review board. The Board of Public Safety voted 3-1 to postpone approval until that language could be added.

Board member Jean Mayes said the board should only have civilians and no officers.

Thayer said civilians would not understand the decision-making behind police uses of force. 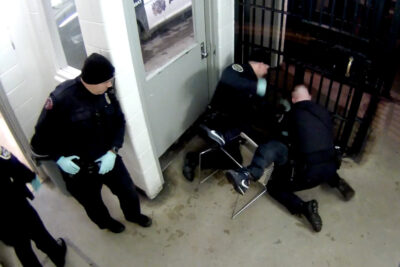 The South Bend Tribune and ProPublica are investigating criminal justice issues in Elkhart County, Indiana. If you have a story to share, please email [email protected].