The civil rights division of the Justice Department, which is responsible for enforcing federal anti-discrimination laws, has been accused in a recent lawsuit of discriminating against its own employees based on race.

A 13-year veteran of the division brought the suit, alleging she was "repeatedly denied the opportunity to apply and compete" for promotions because she is black. 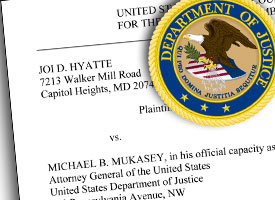 Joi Hyatte, who works as an equal opportunity assistant in the division's voting rights section, claims that superiors subjected her and "African-American colleagues to numerous forms of discrimination and harassment," according to the suit filed May 29 in the U.S. District Court for the District of Columbia.

"I saw the hiring process being abused," Hyatte said in a recent interview with ProPublica. "I just want a fair chance to compete, but I was kept out."

Black and white employees in the voting section have independently supported Hyatte's claims. The suit alleges that several administrative employees have filed racial discrimination complaints against the section's managers, which the Justice Department failed to investigate.

"It's deeply disturbing that the DOJ division designed to fight injustice would allow this repeated discrimination," said Hyatte's attorney, Kathryn Sabbeth, of the Georgetown University Institute for Public Representation.

DOJ spokesman, Charles Miller, refused to comment on Hyatte's suit. "Our response will come in court," he said.

The suit comes at an uneasy time for the civil rights division. An internal Justice Department report released last week revealed that the division illegally used "political or ideological" factors to hire law school graduates with conservative credentials over applicants with "liberal affiliations."

Soon, the DOJ's inspector general will release a follow-up report on the division's hiring decisions. And the Government Accountability Office (GAO) is investigating how the division decides which anti-discrimination cases to pursue, though the GAO recently complained that the Justice Department has stonewalled that probe.

Tanner, who worked in the voting section for more than 30 years, resigned from the civil rights division last year after making racially inflammatory comments that caused a political uproar.

The day before, he told the Georgia NAACP that poor people are likely to have photo identification because check-cashing businesses require it.

Several congressional Democrats, including presumed presidential nominee Sen. Barack Obama (Ill.), called for Tanner to be removed. In Dec. 2007, he resigned from the division and briefly moved to another position in the Justice Department. He is now at the Alabama Law Institute.

Tanner refused to comment on Hyatte's suit or any Justice Department matter. "As soon as I hear from [the DOJ] I'll know how I'm supposed to respond," he said.

Hyatte alleges that, under Tanner and Rivera, the division invoked race in hiring its civil rights analysts-the higher-paying position she has sought since 2006.

Hyatte hasn't been promoted since 1999, despite taking on the duties of an analyst and receiving an "outstanding," the highest possible rating, on her two most recent performance evaluations.

Rivera substituted the word "usually" for "always" and added that Hyatte should work "more openly with her managers."

Rivera instructed Govan, who is black, to downgrade the performance evaluations of other black employees, the suit alleges. Attempts to reach Govan were unsuccessful.

Instead, the division "actively recruited and hired only white and Hispanic candidates from outside the government," including people unqualified for the analyst position, the suit said.

Hyatte also alleged that Rivera withheld performance awards, including cash bonuses, from the division's 12 black employees in 2007. Hyatte said Rivera supervised about two dozen people and six were given awards.

Rivera, who transferred to another voting section position earlier this year, did not return phone calls seeking comment.

As for Tanner's role, he too "demonstrated hostility towards African-American employees," the suit said.

Additionally, Hyatte's complaint said Tanner failed to discipline three white male lawyers who, in Feb. 2007, "behaved in a racially and sexually offensive manner" toward two female employees--one white, the other black. "The attorneys mocked the Caucasian analyst for displaying pictures of prominent African-American civil rights activists and leaders on the walls of her office" and referred to both women as 'lesbians.'

"That was unacceptable to us," Hyatte said.

Now that Tanner has resigned, and Rivera has switched positions, Hyatte said conditions have improved in Section 5.

Still, Hyatte is requesting that a judge order she receive a promotion and back pay since July 2006, when she assumed additional work without a pay raise.

"I know I'm qualified," Hyatte said. "I earned the right to compete for these positions like everyone else."