Update (Nov. 28): The U.S. Environmental Protection Agency said today it was temporarily debarring BP, suspending the company from receiving new contracts with the federal government based on its "lack of business integrity" concerning the 2010 explosion on the Deepwater Horizon rig, which killed 11 workers, and related oil spill.

Officials at the Environmental Protection Agency are considering whether to bar BP from receiving government contracts, a move that would ultimately cost the company billions in revenue and could end its drilling in federally controlled oil fields.

Over the past 10 years, BP has paid tens of millions of dollars in fines and been implicated in four separate instances of criminal misconduct that could have prompted this far more serious action. Until now, the company's executives and their lawyers have fended off such a penalty by promising that BP would change its ways.

That strategy may no longer work.

Days ago, in an unannounced move, the EPA suspended negotiations with the petroleum giant over whether it would be barred from federal contracts because of the environmental crimes it committed before the spill in the Gulf of Mexico. Officials said they are putting the talks on hold until they learn more about the British company's responsibility for the plume of oil that is spreading across the Gulf.

The EPA said in a statement that, according to its regulations, it can consider banning BP from future contracts after weighing "the frequency and pattern of the incidents, corporate attitude both before and after the incidents, changes in policies, procedures, and practices."

Several former senior EPA debarment attorneys and people close to the BP investigation told ProPublica that means the agency will re-evaluate BP and examine whether the latest incident in the Gulf is evidence of an institutional problem inside BP, a precursor to the action called debarment.

Federal law allows agencies to suspend or bar from government contracts companies that engage in fraudulent, reckless or criminal conduct. The sanctions can be applied to a single facility or an entire corporation. Government agencies have the power to forbid a company to collect any benefit from the federal government in the forms of contracts, land leases, drilling rights, or loans.

The most serious, sweeping kind of suspension is called "discretionary debarment" and it is applied to an entire company. If this were imposed on BP, it would cancel not only the company's contracts to sell fuel to the military but prohibit BP from leasing or renewing drilling leases on federal land. In the worst cast, it could also lead to the cancellation of BP's existing federal leases, worth billions of dollars.

Present and former officials said the crucial question in deciding whether to impose such a sanction is assessing the offending company's culture and approach: Do its executives display an attitude of non-compliance? The law is not intended to punish actions by rogue employees and is focused on making contractor relationships work to the benefit of the government. In its negotiations with EPA officials before the Gulf spill, BP had been insisting that it had made far-reaching changes in its approach to safety and maintenance, and that environmental officials could trust its promises that it would commit no further violations of the law.

EPA officials declined to speculate on the likelihood that BP will ultimately be suspended or barred from government contracts. Such a step will be weighed against the effect on BP's thousands of employees and on the government's costs of replacing it as a contractor. 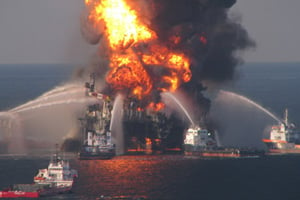 Even a temporary expulsion from the U.S. could be devastating for BP's business. BP is the largest oil and gas producer in the Gulf of Mexico and operates some 22,000 oil and gas wells across United States, many of them on federal lands or waters. According to the company, those wells produce 39 percent of the company's global revenue from oil and gas production each year -- $16 billion.

Discretionary debarment is a step that government investigators have long sought to avoid, and which many experts had considered highly unlikely because BP is a major supplier of fuel to the U.S. military. The company could petition U.S. courts for an exception, arguing that ending that contract is a national security risk. That segment of BP's business alone was worth roughly $4.6 billion over the last decade, according to the government contracts website USAspending.

Because debarment is supposed to protect American interests, the government also must weigh such an action's effect on the economy against punishing BP for its transgressions. The government would, for instance, be wary of interrupting oil and gas production that could affect energy prices, or taking action that could threaten the jobs of thousands of BP employees.

A BP spokesman said the company would not comment on pending legal matters.

The EPA did not make its debarment officials available for comment or explain its intentions, but in an e-mailed response to questions submitted by ProPublica the agency confirmed that its Suspension and Debarment Office has "temporarily suspended" any further discussion with BP regarding its unresolved debarment cases in Alaska and Texas until an investigation into the unfolding Gulf disaster can be included.

The fact that the government is looking at BP's pattern of incidents gets at one of the key factors in deciding a discretionary debarment, said Robert Meunier, the EPA's debarment official under President Bush and an author of the EPA's debarment regulations. It means officials will try to determine whether BP has had a string of isolated or perhaps unlucky mistakes, or whether it has consistently displayed contempt for the regulatory process and carelessness in its operations.

In the past decade environmental accidents at BP facilities have killed at least 26 workers, led to the largest oil spill on Alaska's North Slope and now sullied some of the country's best coastal habitat, along with fishing and tourism economies along the Gulf.

Meunier said that when a business with a record of problems like BP's has to justify its actions and corporate management decisions to the EPA "it's going to get very dicey for the company."

"How many times can a debarring official grant a resolution to an agreement if it looks like no matter how many times they agree to fix something it keeps manifesting itself as a problem?" he said.

Documents obtained by ProPublica show that the EPA's debarment negotiations with BP were strained even before the April 20 explosion on the Deepwater Horizon rig. The fact that Doug Suttles, the BP executive responsible for offshore drilling in the Gulf, used to head BP Alaska and was the point person for negotiations with debarment officials there, only complicates matters. Now, the ongoing accident in the Gulf may push those relations to a break.

Discretionary debarment for BP has been considered at several points over the years, said Jeanne Pascal, a former EPA debarment attorney who headed the agency's BP negotiations for six years until she retired last year.

"In 10 years we've got four convictions," Pascal said, referring to BP's three environmental crimes and a 2009 deferred prosecution for manipulating the gas market, which counts as a conviction under debarment law. "At some point if a contractor's behavior is so egregious and so bad, debarment would have to be an option."

In the three instances where BP has had a felony or misdemeanor conviction under the Clean Air or Clean Water Acts, the facilities where the accidents happened automatically faced a statutory debarment, a lesser form of debarment that affects only the specific facility where the accident happened.

One of those cases has been settled. In October 2000, after a felony conviction for illegally dumping hazardous waste down a well hole to cut costs, BP's Alaska subsidiary, BP Exploration Alaska, agreed to a five-year probation period and settlement. That agreement expired at the end of 2005.

The other two debarment actions are still open, and those are the cases that EPA officials and the company have been negotiating for several years.

In the first incident, on March 23, 2005, an explosion at BP's Texas City refinery killed 15 workers. An investigation found the company had restarted a fuel tower without warning systems in place, and BP was eventually fined more than $62 million and convicted of a felony violation of the Clean Air Act. BP Products North America, the responsible subsidiary, was listed as debarred and the Texas City refinery was deemed ineligible for any federally funded contracts. But the company as a whole proceeded unhindered. 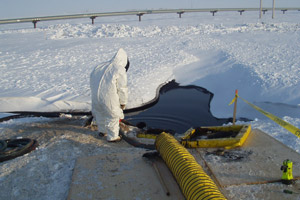 A year later, in March 2006, a hole in a pipeline in Prudhoe Bay led to the largest ever oil spill on Alaska's North Slope – 200,000 gallons -- and the temporary disruption of oil supplies to the continental U.S. An investigation found that BP had ignored warnings about corrosion in its pipelines and had cut back on precautionary measures to save money. The company's Alaska subsidiary was convicted of a misdemeanor violation of the Clean Water Act and, again, debarred and listed as ineligible for government income at its Prudhoe Bay pipeline facilities. That debarment is still in effect.

That accident alone -- which led to congressional investigations and revelations that BP executives harassed employees who warned of safety problems and ignored corrosion problems for years -- was thought by some inside the EPA to be grounds for the more serious discretionary debarment.

"EPA routinely discretionarily debars companies that have Clean Air Act or Clean Water Act convictions," said Pascal, the former EPA debarment attorney who ran the BP case. "The reason this case is different is because of the Defense Department's extreme need for BP."

Instead of a discretionary debarment, the EPA worked to negotiate a compromise that would bring BP into compliance but keep its services available. The goal was to reach an agreement that would guarantee that BP improve its safety operations, inspections, and treatment of employees not only at the Prudhoe Bay pipeline facility, but at its other facilities across the country.

According to e-mails obtained by ProPublica and several people close to the government's investigation, the company rejected some of the basic settlement conditions proposed by the EPA -- including who would police the progress -- and took a confrontational approach with debarment officials.

One person close to the negotiations said he was confounded by what he characterized as the company's stubborn approach to the debarment discussions. Given the history of BP's problems, he said, any settlement would have been a second chance, a gift. Still, the e-mails show, BP resisted.

As more evidence is gathered about what went wrong in the Gulf, BP may soon wish it hadn't.

It's doubtful that the EPA will make any decisions about BP's future in the United States until the Gulf investigation is completed, a process that could last a year. But as more information emerges about the causes of the accident there -- about faulty blowout preventers and hasty orders to skip key steps and tests that could have prevented a blowout -- the more the emerging story begins to echo the narrative of BP's other disasters. That, Meunier said, could leave the EPA with little choice as it considers how "a corporate attitude of non-compliance" should affect the prospect of the company's debarment going forward.