The National Association of Secretaries of State, or NASS, whose members oversee elections in 40 states, has claimed that TurboVote occasionally failed to properly process registrations, and that in other instances it failed to notify people who thought they had registered to vote but had not actually completed the necessary forms.

The TurboVote website went down when it couldn’t handle the volume of attempted registrations on Sept. 25, 2018 — National Voter Registration Day — and the organization was unwittingly used in a scam when someone pretending to be an employee of TurboVote attempted to convince eager voters to share their personal information over the phone.

As a result, NASS has written to Facebook and Twitter asking them to end their relationships with TurboVote as the 2020 election cycle gets underway. The association is asking the social media companies to simply direct prospective voters to government sites with accurate information on how to register.

For its part, TurboVote acknowledges that many people who tried to use its site did not complete the voter registration process — either because they’d overlooked a step or because their registration was rejected for another reason.

“Helping people understand whether or not they have successfully registered is a challenge we are committed to solving,” Kathryn Peters, a co-founder of Democracy Works, said in a statement.

TurboVote acknowledges the other problems and says it is collaborating with states to implement improvements, including integrating with the three states whose systems allow third parties to submit complete voter registrations directly, bypassing the issues identified in 2018.

In the statement, TurboVote said it has helped “millions register and vote nationwide.” NASS asked TurboVote to provide a detailed accounting of who these registrants were — who was new versus changing their address or simply a duplicate — but to date has yet to receive one.

Facebook said in a statement it had maintained “regular contact” with NASS throughout the election and looked forward “to continuing those partnerships as we assess how best to structure our voter registration and other civic engagement efforts ahead of the 2020 elections season.”

Similarly, Twitter indicated in a statement that it was looking forward to maintaining its relationship with NASS and that it was in the process of evaluating “partner feedback” and building “on our efforts to ensure we’re fostering an environment conducive to healthy, meaningful conversations on our service.”

A person familiar with Twitter’s election efforts indicated the company was unaware of problems with TurboVote’s work until after the election but was taking this into consideration as it plans for 2020.

TurboVote had also been enlisted by Facebook and Twitter to help in a get-out-the-vote effort — pledging to text reminders to vote to those who’d used its website to register. These reminders occasionally led to additional confusion, as people who had not successfully registered wound up frustrated at the polls.

“Many of these individuals then went to the polls and quickly found out they were not registered,” read the letters sent to Facebook and Twitter and signed by NASS President Jim Condos, who is also Vermont’s secretary of state.

In an interview, Peters said the organization was working on better language to make clear to those receiving the text messages that they may not have registered.

The letters follow a contentious exchange between TurboVote and other nonprofit voting groups at a recent National Association of State Election Directors meeting. Officials from across the country confronted TurboVote over the issues addressed in the letter sent by NASS. 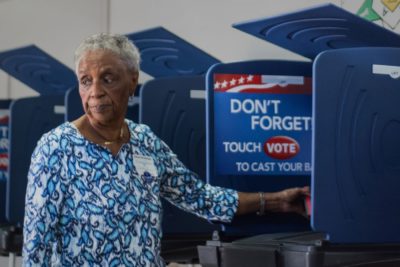 American Voting Machines Are Old and Vulnerable, But Who Will Pay for New Ones?

The main threat to American voting machines may not be hacking, but old age.

“These text reminders created some hysteria in my state. They think that those messages are coming from us, and they are not,” said Lori Augino, the elections director in Washington state, who said text messages from unfamiliar third parties stoked existing fears over election security.

Jared Dearing, the election director in Kentucky, went further. “You’re acting as an interlocutor between registrants and the people who register, and, in my opinion, we don’t need interlocutors,” he said. “If one individual falls through the cracks in this thing, they are disenfranchised.”

Seth Flaxman, also a co-founder of Democracy Works, and Peters said the meeting and the letters have reinvigorated their desire to work more productively with the states to solve these issues. “We feel strongly that we cannot do this work without a productive relationship with the states,” Flaxman said. “We are committed to that.”

While Peters and Flaxman noted that states have made improvements to their websites and voter registration processes — such as adopting online registration — they said that the government-managed websites recommended by NASS underserve voters who cannot register online, including those who do not have the necessary state-issued ID many such systems require.

For example, Vote.gov directs Texas registrants to a 26-page PDF, while TurboVote walks Texans through a series of questions that take the interested voter through the steps of registration. Peters and Flaxman also expressed concern that many potential voters would be less likely to complete registrations without TurboVote, and noted that Vote.gov has no ability to measure or reach out to those who became overwhelmed or confused and stopped the process.

Further, Peters and Flaxman say they believe that people need a national site that not only guides them through a state’s registration process, but that can also follow up via text and email to assist voters in either casting a ballot by mail or in person for every election — services TurboVote provides.

“In most states, voter registration has multiple steps, and missing a step can lead to an incomplete or rejected registration (for example, some potential voters may not click through to the second page of a state website, others may download a paper form but don’t print it),” Peters said in a statement. “This is a problem TurboVote was built to solve.”

Correction, March 20, 2019: This story originally overstated the number of states where members of the National Association of Secretaries of State oversee elections. It is in 40 states, not all 50.

Correction, March 11, 2019: This story originally misidentified TurboVote as the nonprofit organization behind a voter registration effort endorsed by Facebook and Twitter during the 2018 election. Democracy Works is the name of the organization; TurboVote is a website run by Democracy Works.