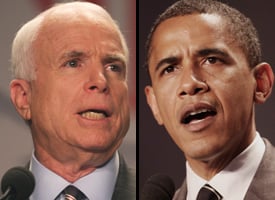 With the government takeover of mortgage giants Fannie Mae and Freddie Mac likely to cost taxpayers tens of billions, many experts have pointed fingers at the companies' odd existence as public-private entities. They existed in a kind of alternate regulatory universe, exempt from many SEC requirements.

Yet as today's New York Times notes, whatever their positions now, neither presidential candidate "has a record of directly challenging the companies."

And as it happens, Freddie, Fannie and friends have been quite generous with Sens. McCain and Obama.

In the current election cycle, Sen. McCain has received $169,000 from the mortgage companies and their affiliates. Two of the top contributors -- Freddie Mac's board member Geoffrey T. Boisi and Fannie Mae lobbyist Richard F. Hohlt -- are listed on McCain's Web site as bundlers who've raised between $100,000-$250,000 for McCain. (A sidebar in the Times lists McCain's top donors connected to the mortgage companies.)

McCain's campaign also has a few more direct connections with the companies. For example, the Times notes that McCain's campaign manager, Rick Davis, was also previously "head of the Homeownership Alliance, a coalition of banks and housing industry interests led by Fannie and Freddie to stave off regulations."

Meanwhile, Sen. Obama has received $122,850 from the Fannie and Freddie's employees and PACs since coming in office. Even though Obama has only been in the Senate since 2005, only one other colleague, Senate Banking Committee Chairman Christopher Dodd (D-CT), has received more from the same source over the past decade.

And of course, Obama's one-time VP selection chief, Jim Johnson, is a former CEO of Fannie Mae. (Johnson ended his involvement with Obama's campaign after criticism of his role at Fannie Mae.)

Obama is now pushing for cuts to the generous severance packages to the outgoing executives -- "inappropriate windfall payments," he says. But there is scant evidence of Obama pushing for tighter regulations for the companies before the meltdown. As the Times notes, "Democrats in Congress have been well known as enablers of the two companies for years."

With the government's takeover, the two companies will no longer be spreading their largesse among legislators. But it was quite a ride. As Bloomberg News notes, Fannie Mae and Freddie Mac spent $7.4 million on lobbying alone in the first six months of this year. The lobbying operation featured scads of former legislators, Democratic and Republican.