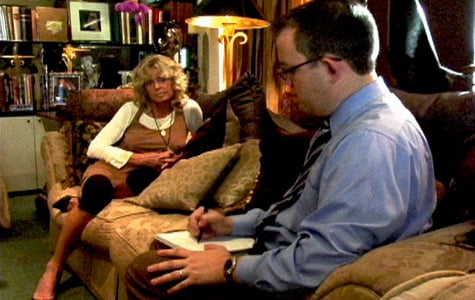 This story was co-published with The Los Angeles Times and appeared in that newspaper on May 11, 2009.

For more than 2 1/2 years, Farrah Fawcett's battle with cancer has sparked a flurry of headlines for celebrity tabloids. But it also has stripped the actress of her ability to seek treatment while maintaining her privacy, she said in an interview.

The former "Charlie's Angels" star, 62, said she set up a real-life sting operation to prove to UCLA that one of its employees was leaking her medical data to the Enquirer. She also talked about the pressure she felt from the hospital to donate money to set up a foundation in her name.

Above all, in a firm voice that betrayed no hint of her terminal illness, Fawcett described how she was deprived of the choice that most other cancer patients have: when, and even whether, to share information with family, friends or strangers.

"It's much easier to go through something and deal with it without being under a microscope," she said. "It was stressful. I was terrified of getting the chemo. It's not pleasant. And the radiation is not pleasant."

"It becomes your life," she said, sitting on the couch of her Los Angeles home, flanked by an Andy Warhol portrait of her and surrounded by sculptures she crafted. "People call, 'How are you?' 'How do you feel?' 'We're praying for you.' 'Do you still have your hair?' 'What do you feel like?' When every single call is that kind of call ... it's all you talk about. It's all-consuming. Then, your quality of life is never the same."

Despite federal patient privacy laws, no details about a celebrity's medical condition appear to be off-limits. Celebrity Web sites draw millions of visitors each day, and the appetite for news about ailing stars is insatiable.

"Particularly when it's something sexy or scandalous, or on the negative side, something kind of tragic and sad, for whatever reason, the public is interested in those types of stories," said Brandy Navarre, vice president of X17 Inc., a paparazzi agency.

As for Fawcett, Navarre said, "I think it's really just an American icon and the public's love of this woman and the nostalgia and everything around her."

The tabloids, long fascinated by Fawcett, became even more enthralled after her cancer diagnosis. More than once, the Enquirer said that Fawcett was near death or had given up, including a December 2006 article headlined, "Farrah Begs: 'Let Me Die.'"

That prompted a flurry of letters from other cancer patients asking her not to give up hope because she was a role model for them.

"God, I would never say something like that," she said. "To think that people who did look up to me and felt positive because I was going through it too and yet I was strong ... it just negated all that."

As time went on and more stories appeared, Fawcett said she grew convinced that information about her medical condition was being leaked by someone at UCLA. Whenever she sought treatment there, word always got out. Even when the tabloid reports were false, she said, they were based on a morsel of truth.

Video: In Her Own Words --
Farrah Fawcett

Fawcett said she realized that she needed to prove her theory. So, when she found out that her cancer had returned in May 2007, she deliberately withheld the news from nearly all of her relatives and friends.

Within days of her diagnosis, the news was in the Enquirer. "I couldn't believe how fast it came out," Fawcett said. "Maybe four days."

UCLA began an investigation and quickly found that one employee had accessed her records more often than her own doctors. Fawcett said she asked for the employee's name, but the senior UCLA official in charge of patient privacy refused, saying, "We have a responsibility to protect our employees."

At the same time, Fawcett said, UCLA repeatedly asked her to donate money to the hospital for a foundation to be set up in her name.

The university went so far as to give her a prewritten letter that she could sign and fill in a dollar amount for the foundation, documents show. It also created an official-looking proposed announcement that said, "Ms. Farrah Fawcett has established a fund in the Division of Digestive Diseases with the expansive goal of facilitating prevention and diagnosis in gastrointestinal cancers."

"They're acting like nothing happened," Fawcett said with a laugh. "It's like, 'This will make it all OK.' I felt that all of a sudden, they were trying awfully hard to push it. Too pushy. In other words, it made me suspicious."

In a statement issued last week in response to Fawcett's comments, UCLA Health System said it "values its relationship with its donors and potential donors" and keeps its discussions with them private.

The statement also said UCLA had strengthened its policies and systems to better protect patient privacy. For example, it now masks patients' Social Security numbers in electronic files and forces users to identify their reasons for looking at clinical records. It also implemented new patient privacy training for all staff, among other things.

"UCLA Health System considers patient confidentiality a critical part of our mission of teaching, research and patient care," it said.

After months of requests, UCLA ultimately provided Fawcett's lawyers with the name of the administrative specialist who had gone through her records. In July 2007, as the hospital moved to fire the worker, Lawanda Jackson, she quit. Federal prosecutors tracked the leaks to Jackson as well.

Jackson pleaded guilty in December to a felony charge of violating federal medical privacy laws for commercial purposes, but died in March of cancer before she could be sentenced. Prosecutors alleged that beginning in 2006, the Enquirer gave her checks totaling at least $4,600 in her husband's name.

Fawcett said she decided to speak up about the ordeal because she wants to see the Enquirer charged criminally for inducing UCLA workers to invade her records. "They obviously know it's like buying stolen goods," she said. "They've committed a crime. They've paid her money."

The U.S. Attorney's Office said its investigation was ongoing.

Cameron Stracher, senior media counsel for American Media, Inc., the Enquirer's parent company, declined to discuss the investigation, but issued the following statement: "The National Enquirer respects Ms. Fawcett and her brave battle with cancer, and acknowledges, as she has, that her public discussion of her illness has provided a valuable and important forum for awareness about the disease.”

In part as a result of Fawcett's experience, Gov. Arnold Schwarzenegger signed into law tougher penalties for institutions and individuals that violate patients' privacy.

California health inspectors concluded that, all told, Jackson looked at the records of 939 patients "without any legitimate reason" from April 2003 to May 2007.

Fawcett said she was not surprised that none have come forward to discuss it. Some don't want to draw renewed attention to the procedures they had performed. Complaining, Fawcett said, would have been fodder for the tabloids.

Even as her illness progressed, Fawcett was followed by paparazzi, including when she traveled to Germany for treatments. When she returned to LAX in March, after her most recent trip to Germany, photographers snapped pictures as she was taken to her car in a wheelchair.

"I'm a private person," she said in the interview. "I'm shy about people knowing things. And I'm really shy about my medical [care]. It would be good if I could just go and heal and then when I decided to go out, it would be OK."

"It seems that there are areas that should be off-limits."

The interview was conducted in August on condition that The Times delay publication until it received permission from Fawcett or Craig Nevius, an executive producer of the upcoming documentary, "Farrah's Story," which chronicles Fawcett's struggle to recover and maintain her privacy. "There will be a good time, and what I have to say then will be more important," she said at the time.

On April 29, Nevius gave written permission for the interview to be published within five days of the documentary's broadcast date. The documentary is scheduled for broadcast on NBC on Friday. The Times' interview with Fawcett was videotaped for possible inclusion in the documentary.

Fawcett's condition has deteriorated since the time of the interview -- the cancer has spread to her liver -- and she is now bedridden and has lost her hair, her longtime companion Ryan O’Neal told People magazine on May 4. Her treatment has essentially stopped, he said.

During the interview, Fawcett was focused and thoughtful, openly pondering the impact she wanted to have in several areas, including patient privacy and alternative treatments for cancer.

"I'm holding onto the hope that there is some reason that I got cancer and there is something -- that may not be very clear to me right now -- but that I will do," she said.

Ornstein reported much of this story while on staff at The Los Angeles Times. He is now a senior reporter at ProPublica, a nonprofit investigative reporting newsroom in New York.