As we reported earlier this week, the Federal Election Commission, which regulates the flow of political cash, has been plagued by persistent gridlock on some key areas of campaign finance.

Why’s that important? Because, as we explain, more money is coming in and much of it is flowing in through new and barely regulated groups.

Take a look at these graphs — found in a report [PDF] recently posted by the commission — that shine a spotlight on independent spending, or spending that’s technically not coordinated with candidates and their campaigns: 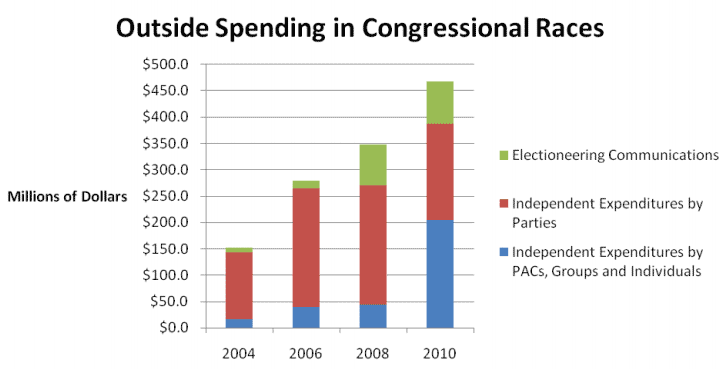 What’s striking here is that independent spending by “PACs, Groups and Individuals” more than quadrupled. Similar spending by parties stayed roughly the same. The data, compiled by the commission, are just another indication that the significance of traditional party committees is shrinking in the rapidly changing campaign-finance landscape, eclipsed by new groups that can take in unlimited amounts to fund ads. (The other category in the chart, “electioneering communications,” represents what are known as “issue ads” that don’t explicitly endorse or oppose candidates. Spending on those ads stayed at about $80 million, compared to its 2008 level.)

Another FEC graph breaks down spending a little further. Setting aside the party committees that cut back on their independent spending in 2010, it shows that while traditional PACs have increased their independent spending somewhat, a more substantial increase came from other groups and the rise of Super PACs, which started forming in 2010 after several court rulings opened the door to unlimited corporate and union donations. 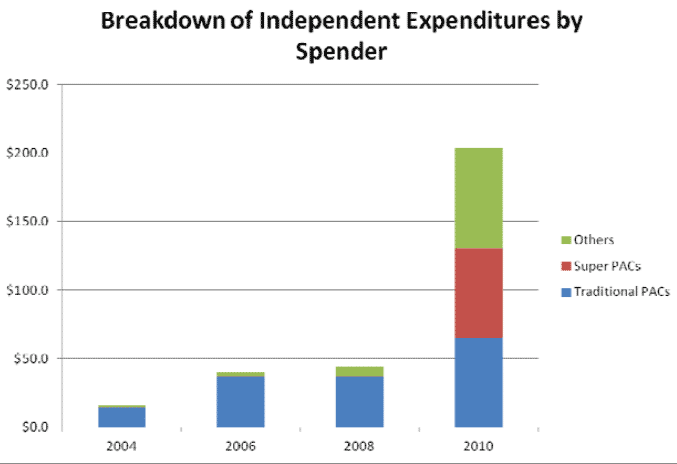 Super PACs, as we’ve noted, can take unlimited donations so long as they’re not coordinating their spending with campaigns. Though these groups have grown in number and influence since the last election cycle, the FEC has yet to issue any rules that specifically address them and has only issued advisory opinions — which don't have the force of law or regulation — giving guidance on what they’re allowed to do.

Campaign-finance watchers estimate that independent spending in the 2012 cycle will blow away what was seen in 2010, especially since it’s also a presidential election year. If the FEC’s data are any indication, the Super PACs and other nonprofit groups will be the ones to watch.

At the moment, while fundraising is in full swing, the spending is just starting. Here’s a look at some of the ads that both Democrat- and Republican-leaning Super PACs and 501(c) groups have already put out with the money that has come in.