Advancing an investigation that has spanned two continents and three decades, U.S. federal agents have arrested a Guatemalan immigrant suspected of involvement in the massacre of about 250 villagers in 1982 during Guatemala’s civil war.

Jose Mardoqueo Ortiz Morales, 54, was arrested at his home in Hyattsville, Maryland, last Friday, Immigration and Customs Enforcement officials said Tuesday. Ortiz is a legal permanent resident of the United States who worked in a mail room at Johns Hopkins University in Baltimore, authorities said. He faces charges in U.S. immigration court and potential deportation to Guatemala to stand trial for one of the worst massacres in Latin American history, the officials said.

Ortiz becomes the fifth suspect arrested in the United States for the slaughter of men, women and children in the hamlet of Dos Erres in northern Guatemala more than three decades ago. Five veterans of an elite Guatemalan commando force known as the “kaibiles” have been convicted by courts in Guatemala on charges arising from massacre. But six others have eluded capture, some of them aided by Guatemalan security forces whose power has impeded the quest for justice, according to Guatemalan and U.S. investigators.

In 2012, ProPublica and This American Life chronicled the Dos Erres case and the odyssey of a survivor, Oscar Ramírez Castañeda. Ramírez is an immigrant father of four who lives in the Boston area.

In 2011, he learned from Guatemalan prosecutors that his father was not an Army lieutenant as he had believed, but instead a leader of the squad that killed Ramírez’s mother and eight siblings in Dos Erres. Ramírez, who was three years old at the time of the assault, had no memory of the attack. He was raised by the lieutenant’s family because the officer died in a car accident soon after the massacre.

After ProPublica told his story in 2012, Ramírez gained political asylum in the United States. He was reunited with his real father, who continues to live in Guatemala. The father survived because he was not in Dos Erres on the day the commandos swept into the village.

Last week’s arrest of Ortiz by agents of Homeland Security Investigations continues a saga that has played out in Guatemala as well as the United States. A number of Guatemalan soldiers, including war criminals and human-rights abusers, joined the northward diaspora of hundreds of thousands of Central American migrants who fled their violent homelands in the 1980s and 1990s. 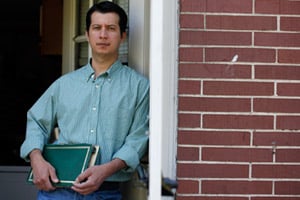 In 1982, amid Guatemala’s brutal civil war, 20 army commandos invaded the jungle hamlet of Dos Erres disguised as rebels and killed more than 250 people. It took 30 years for Oscar Alfredo Ramírez Castañeda, one of only a handful of survivors, to learn the truth about the massacre. Read the story.

During the Dos Erres massacre in December of 1982, the commandos stormed the remote jungle hamlet and unleashed a two-day rampage of rape, torture and murder. Witnesses identified Ortiz as one of the soldiers who blindfolded the victims, interrogated them, hit them with a sledgehammer and dumped them into a well in the center of the village, according to Guatemalan and U.S. court documents. Ortiz was a corporal in the 20-man unit of battle-hardened instructors in the commando academy, according to the documents.

Because of privacy laws covering U.S. immigration cases, few details were available about the investigation that led to the capture of Ortiz. He is believed to have come to the United States in the late 1990s after the civil war ended and the investigation of the massacre began in Guatemala, according to U.S. officials.

Ortiz avoided detection in 2009 when U.S. federal agents and the war-crimes unit of Immigration and Customs Enforcement, acting on information released by a Latin American human-rights court, identified other fugitives living in Florida, California and Texas, officials said. Ortiz apparently shielded himself by using the first name Jose in the United States rather than Mardoqueo, the more distinctive first name by which he was known to witnesses who had identified him in the Guatemalan investigation years ago, officials said.

The U.S. investigation of Ortiz began in early 2015 as the result of a lead provided by Guatemalan prosecutors to the U.S. Justice Department, officials said. The Guatemalans indicated for the first time that Ortiz also used the name Jose, causing U.S. officials to check their databases with that new information.

Agents then undertook the lengthy process of identifying the man they believe is the Dos Erres fugitive, investigating and monitoring him, and developing a prosecution strategy, according to officials. Ortiz now faces charges in immigration court for his alleged role in extrajudicial killings in Guatemala, a procedure intended to remove his legal immigrant status and enable his deportation to Guatemala, officials said.

Two of the commandos previously arrested in the United States, Gilberto Jordan and Jorge Sosa, are U.S. citizens. They were convicted of naturalization fraud because they concealed their roles in the massacre from U.S. immigration officials. They are serving ten-year prison sentences in the United States.

Two other fugitives who were not citizens were sent back to Guatemala. A Guatemalan court convicted Pedro Pimentel Rios in 2012 and sentenced him to 6,060 years in prison. A suspect named Santos Lopez Alonzo is awaiting trial.

On Tuesday, a lawyer for Ramírez, the survivor of the massacre, hailed the news of the arrest in Maryland. The ability of war-crimes suspects to live legally and peacefully in the United States for years contrasts with the experience of Ramírez and others who came to the country illegally, said lawyer R. Scott Greathead, who has worked on major Central American human-rights cases.

“How do these guys who are known war criminals get papers and legalize themselves?” Greathead said. “And the victims don’t. Thousands of Guatemalan and Salvadoran victims of those conflicts, of serious human-rights crimes in which the United States had a role, have trouble getting legal status. It mandates a reevaluation of our immigration policies.”