For years, it was how things worked at the Election Assistance Commission, the federal agency charged with helping America’s thousands of local officials run elections: If you served as one of the agency’s four commissioners, making more than $150,000 a year, you lived in and around Silver Spring, Maryland, where the agency’s office is located. The reasons were straightforward: The agency’s small staff needed daily guidance from its leadership, and its modest budget was not meant to pay for commissioners to travel from out of state.

But this year, the EAC’s executive director, Brian Newby, allowed two of the four commissioners — including the agency’s chairwoman — to work outside the Washington, D.C., area and agreed to pick up the costs of their travel to and from the office. Christie McCormick and Donald Palmer, the two Republican commissioners, work most days from out of state — McCormick, the agency chairwoman, in Charlottesville, Virginia, and Palmer in a suburb of Jacksonville, Florida.

Newby appears to have approved the changes on his own. Current and former employees of the agency say no formal announcement was made, and the agency’s full slate of commissioners, which includes two Democrats, does not appear to have taken a vote on the change in practice.

The disclosures, contained in answers to questions the EAC provided to a congressional oversight committee, come as the agency has repeatedly claimed it is underfinanced and critics say it is not doing enough to assist election administrators around the country at a time of genuine threats to the integrity of the nation’s elections.

Rep. Zoe Lofgren, the Democratic chairwoman of the House Administration Committee, which oversees the EAC, said in a letter to the commission that news of the working arrangements for McCormick and Palmer “raises concerns about how much taxpayer money is being used to accommodate travel between duty stations and agency headquarters when the agency is avowedly struggling with its current funding levels.”

In its answers to the committee, the EAC said both that it compensated employees with duty stations outside of Washington for travel and that it had spent $0 on such travel in the first half of fiscal year 2019. Lofgren has asked for clarification on this apparent inconsistency. Interviews with some EAC staff members indicate that McCormick and Palmer only show up in the agency’s office occasionally.

“I don’t know what [McCormick and Palmer] are doing,” said one current employee. “They don’t know what I’m doing either.” Another employee simply shrugged when asked the last time they could recall interacting with McCormick in the office.

The agency has an annual budget of roughly $8 million and a staff of about 30 employees. The agency is meant to dole out federal dollars allocated to election administration, act as a clearinghouse for quality election information and collect data on election administration nationally. Most decisions made by the EAC require a majority vote of the four commissioners, necessitating bipartisanship. The agency is currently, for example, in the process of considering the next edition of Voluntary Voting System Guidelines, which would require a vote of all four commissioners. The agency has not yet responded to ProPublica’s request for the tally votes taken by the commissioners in recent months.

In a joint statement, McCormick and Palmer said that they are in the office “regularly” and that they frequently travel to other states to advise and communicate with election administrators. They said they are “in daily communication with senior leadership at the Commission to assure the agency’s effectiveness.”

A spokesperson for the EAC declined comment on the answers provided to its oversight committee, indicating the agency would respond to Lofgren’s concerns prior to issuing statements to the media. She indicated that the “senior leadership” included Newby and General Counsel Cliff Tatum but offered no clarity on how often they communicate with lower-level EAC staff.

Tom Hicks and Ben Hovland, the agency’s two Democratic commissioners, are based in the Washington area and are said by other employees to be in the office regularly. Employees at the EAC say that they’ve continued to do their work largely unsupervised, and that McCormick and Palmer rarely offer guidance on their work. 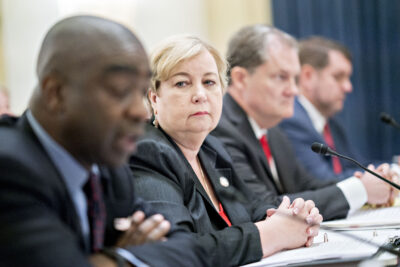 The decision to begin reimbursing the agency’s leadership for travel comes at a time when McCormick and other commissioners have repeatedly said that the agency’s effectiveness is in jeopardy over lack of funds. At a May 15 hearing before the Senate Rules Committee, McCormick told senators that the agency was at a “critical crossroads with regard to having sufficient resources necessary to support state and local election administrators and the voters they serve.”

DeForest “Buster” Soaries Jr. was a Republican commissioner and the agency’s first chairperson when it first started its work in 2003. He said in an interview that he’d inquired about having his travel expenses from New Jersey reimbursed. The request was denied. Paul DeGregorio, a former Republican commissioner who also served as chairman, also understood that commissioners were required to be in the Washington area and that travel expenses would not be reimbursed.

“It was always my understanding when I took the job that my location or duty station was D.C., and that was the intent of the [Help America Vote Act],” he said, referencing the law that established the agency.

Both Soaries and DeGregorio expressed skepticism at the idea that the job of a commissioner could be done remotely. Both indicated that commissioners needed to be on hand to manage the agency’s relatively small staff, and that decisions about the direction of the agency would require a vote of all commissioners, a task that requires constant communication. Current EAC staff members say that the full set of commissioners are rarely on hand to discuss matters, and telephone communication happens only rarely.

“It’s a full-time job that requires presence and participation,” Soaries said. “The amount of deliberation that had to occur required us to talk to each other consistently and arrive at a consensus.”

DeGregorio said the arrangement was “odd,” and said that — especially as chair — it would have been nearly impossible to appropriately oversee the work of the agency’s executive director, whom the commissioners are responsible for appointing and supervising.

Lofgren, in her correspondence with the EAC, also raised questions about how Palmer had been compensated by the agency.

Palmer, who was confirmed unanimously by the Senate in January 2019, was paid a total of $73,946 to work part time as a “senior adviser” to the agency over the prior year. Lofgren indicated in the correspondence that the agency had been unable to say what exactly Palmer had done as the adviser, and current employees said Palmer reported directly to Newby. None could explain what he’d accomplished.

“This raises at least the appearance of impropriety, if not impropriety itself,” Lofgren said in her letter to the EAC.

This may not have been Palmer’s only position with the agency before his confirmation. In July 2017, McCormick emailed members of President Donald Trump’s “voter fraud” commission to urge them to hire Palmer. “He is currently working on [a National Voting Rights Act] project for the EAC as a contractor,” she wrote, calling him a “Christian” and a “believer in the cause.”

Correction, July 19, 2019: This story originally misstated the political affiliation of DeForest “Buster” Soaries Jr. He is a Republican, not a Democrat.