Federal officials acknowledged Saturday that David Coleman Headley, the U.S. businessman who confessed to being a terrorist scout in the 2008 Mumbai attacks, was working as a DEA informant while he was training with terrorists in Pakistan.

Federal officials, who spoke only only on background because of the sensitivity of the Headley case, also said they suspect a link between Headley and the al-Qaida figures whose activities have sparked recent terror threats against Europe. 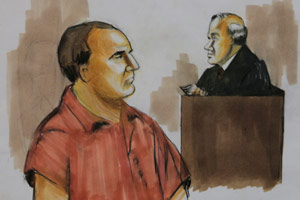 The revelations came after a report Friday by ProPublica and the Washington Post that the FBI had been warned about Headley’s terrorist ties three years before the Mumbai attacks. Headley wasn’t arrested until 11 months after the attack.

After Headley was arrested in a 2005 domestic dispute in New York City, his wife told federal investigators about his long involvement with the terrorist group Lashkar-i-Taiba and his extensive training in its Pakistani camps. She also told them he had bragged about being a paid U.S. informant while undergoing terrorist training.

Despite a federal inquiry into the tip, Headley spent the next four years doing terrorist reconnaissance around the world. Between 2006 and 2008, he did five spying missions in Mumbai scouting targets for the attack by Lashkar that killed 166 people, including six Americans.

On Saturday, the New York Times reported that another of Headley’s wives – he apparently was married to three women at the same time – had also warned U.S. officials about his terrorism involvement. In December 2007, the Moroccan woman met with officials at the U.S. embassy in Pakistan and told them about Headley’s friendship with Lashkar members, his hatred of India and her trips with him to the Taj Mahal Hotel, a prime target of the Mumbai attacks, the Times reported.

“U.S. authorities took seriously what Headley's former wives said,” a senior administration official said. “Their information was of a general nature and did not suggest any particular terrorist plot."

Similarly, a federal official described the 2005 tip from Headley’s U.S. wife to the Joint Terrorism Task Force in New York City as “general in nature.”

“The JTTF could not link the information to a specific threat, plot or terrorist group,” the official said.

A different picture emerges from a law enforcement document describing the New York tip and from interviews with anti-terror officials and a person close to the case. Headley’s U.S. wife described her husband’s frequent trips to Pakistan, his training stints at a Lashkar camp near Muzaffarabad, and his recruiting and fund-raising for Lashkar.

Although the claims of an angry spouse might be suspect, the wife’s in-depth knowledge of Lashkar would have reinforced her credibility, because the Pakistani extremist group is not well known to the average American.

Headley is the son of a Pakistani father and an American mother. He became a DEA informant in the late 1990s, after he was arrested on heroin charges. His U.S. wife told investigators that he told her that he started training with Lashkar in early 2002 as part of a secret mission for the U.S. government. On Saturday, a federal official said Headley’s work as an informant appears to have lasted until sometime between 2003 and 2005.

Another federal official said Headley was a DEA informant in “the early 2000’s.”

“I couldn’t say it continued into 2005, but he was definitely an informant post-9/11,” the official said.

Although Lashkar has not been involved in major drug activity, the terrorist group could offer an informant access to the terrain where Islamic extremism intertwines with South Asian drug mafias.

Because of the difficulty of spying in Pakistan, Headley could have been valuable to U.S. intelligence services. In late 2001, some drug informants moved into anti-terror operations. The DEA also sometimes shares informants with other law enforcement and intelligence agencies.

“After 9/11, a lot of guys who had been closed down for some time came forward offering their services,” a former senior law enforcement official said. “They were passed off to the FBI or CIA unless it was mainly drug work.”

Headley’s relationship with the U.S. government is especially delicate because the investigation has shown that he also had contact with suspected Pakistani intelligence officials and a Pakistani militant named Ilyas Kashmiri, who has emerged as a top operational leader of al-Qaida.

Last year, Kashmiri worked with Headley on a plot against a Danish newspaper that had angered Muslims by publishing cartoons of the Prophet Mohamed, according to court documents. To advance the plot, Kashmiri put Headley in touch with al-Qaida operatives in Britain, according to a senior anti-terror official.

British intelligence detected the meetings between the operatives, who were under surveillance, and Headley, who surfaced as a figure known as “David the American,” the senior official said. That led to Headley’s arrest by the FBI last October.

In March, Headley pleaded guilty to charges of terrorism in the Mumbai attacks and to a failed plot to take and behead hostages at a Danish newspaper. He is cooperating with authorities.

“Kashmiri is directly linked to those threats, especially involving Britain and British Pakistanis,” the federal official said Saturday. “There is some linkage to Headley.”

For weeks, U.S. anti-terror officials have been alarmed about intelligence that Kashmiri has a network in Europe of about 15 operatives with Western passports, according to two U.S. law enforcement officials. Headley had contact with Kashmiri’s network, but it is not clear if he met with the same European operatives involved in the recent plots, the officials said.