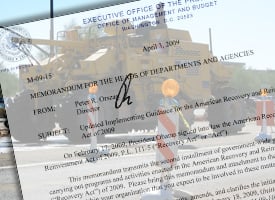 Ah, autumn! The kids back in school. The leaves turning their fiery shades of amber and crimson. And Americans finding out how states are spending their stimulus dollars -- months later than originally promised.

A new memo (PDF) from the White House Office of Management and Budget pushes back a key deadline for detailed reports from states, school districts and housing authorities. The reports are expected to provide the first national glimpse at what projects receive stimulus funding, which companies get contracts and how many jobs they create.

OMB initially set the deadline (PDF) for July 10, but the new guidance pushes that back three months to Oct. 10.

OMB spokesman Tom Gavin said the earlier deadline was an "aggressive" effort to get the information quickly. But after talking to state and local officials, the timeline faced a reality check.

"We're trying to put together an unprecedented level of transparency and accountability, and it's taking a little bit of time," Gavin said. "But I think at the end of the day people are going to be able to find out exactly how this money is being spent."

Admittedly, deadlines in the stimulus act are a bit loose.

The bill requires federal agencies to collect the reports "within 180 days of enactment," or mid-August. But it also says states and other recipients are required to file the reports 10 days after the end of each calendar quarter. OMB will gather some information by July 10, but it will be "more limited than originally envisioned," Gavin said.

The 175-page memo, sent by OMB Director Peter Orszag to federal department and agency heads on Friday, answers a wide range of questions from how to count jobs to how the stimulus will comply with tribal self-determination agreements. For stimulus watchers, it gives a glimpse of what required data might look like and provides guidance on the "buy American" provisions for construction materials.

Craig Jennings, a senior policy analyst of the watchdog group OMB Watch, said he was excited to see that the government was trying to collect information on subcontractors.

OMB has faced criticism from Congress over an earlier memo, which indicated that the public won't be able to track every contract.

The OMB guidance also addresses other concerns of Congress and watchdog groups. Right now, federal agencies report stimulus progress weekly. But the reports are filled with generalities and jargon.

"Agencies should ensure that their descriptions of procurements use language appropriate for a more general audience, avoiding industry-specific terms and acronyms without plain language explanations," the memo states.