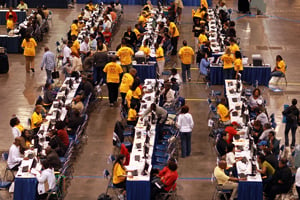 An amendment to the financial reform bill filed yesterday by Sen. Al Franken, D-Minn., and Sen. Olympia Snowe, R-Maine, would create a special office to assist homeowners who are facing problems with the administration's mortgage modification program. The measure has White House support, but is opposed by the financial services industry.

As we've reported, homeowners and housing counselors frequently complain that mortgage servicers frequently lose financial documents and make mistakes -- mistakes that can result in foreclosure. Homeowners regularly wait several months for an answer on their application.

About $75 billion has been earmarked for the program from the TARP, but very little of that has so far been spent owing to the small number of permanent modifications so far: about 228,000 as of March.

The amendment proposes a new "Office of the Homeowner Advocate" that would be devoted to solving homeowner problems with the program. Right now, homeowners with complaints are told to call the HOPE Hotline, which has a staff of counselors to handle escalations -- a process that's been criticized as ineffective.

Under the amendment, all homeowner complaints about servicers would go to this new "Office of the Homeowner Advocate" within the Treasury Department. That would effectively create an appeals process for homeowners who think they've been wrongly denied a modification -- something that housing counselors and other consumer advocates have long said is desperately needed.

"A mandated homeowner's advocate, built into the process and reportable to Congress, would counteract the servicer unresponsiveness we've heard so much about and be able to serve as a recourse for homeowners," said Richard H. Neiman, superintendent of banks for New York State and a member of the Congressional Oversight Panel for the TARP. Neiman has been pushing for the creation of the office.

The idea has already garnered opposition from the financial services industry. Scott Talbott, a lobbyist with the Financial Services Roundtable, which counts the largest mortgage servicers among its many members, said the group opposed the amendment because it would just create "another layer of bureaucracy that could actually slow" the program's process. He also said there is already adequate oversight of the program.

One of the watchdogs that oversees the TARP, the Government Accountability Office, reported in March (PDF) that servicers have widely varying ways of dealing with homeowner complaints and some were not systematically tracking them. Several tracked only written ones, the GAO said. Another servicer had closely tracked only those complaints that were addressed to a company executive.

"The unnecessary problems with HAMP are found mostly with servicers who have provided inadequate, inconsistent service to homeowners and delayed or denied homeowner assistance on a mass basis," said Alys Cohen of the National Consumer Law Center.

The amendment has support from Americans for Financial Reform and a host of consumer advocate groups, including the Center for Responsible Lending, the Service Employees International Union and the United Auto Workers.

The amendment also specifies that any candidate for the homeowner advocate position would have to come from an advocacy background and cannot have worked for a servicer or the Treasury in the previous four years. The advocate's office would be funded out of the TARP and close down after the federal program ends. The idea is modeled after the Internal Revenue Service's "taxpayer advocate." It's not clear when the amendment might come up for a vote.