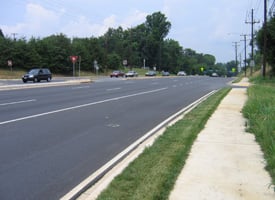 A skeptical person might think the first contractor to benefit from President Obama's $787 billion stimulus package would have political connections to the Democratic Party. Not so. The chief executive of the construction company awarded the first recovery project is actually a big Republican donor -- and contributed to Obama's opponent John McCain.

The selection of the company, American Infrastructure, was announced by Obama at a news conference highlighting how stimulus money was helping transportation projects. The $2.1 million road resurfacing project in Silver Spring, Md., will support 60 jobs and be completed by late fall, Gov. Martin O'Malley's office said.

In 2008, the company's chief executive, A. Ross Myers, gave $25,000 to McCain Victory 2008 and $20,400 to the Republican National Committee, according to Federal Election Commission records. He has donated thousands of dollars each to Rudolph Giuliani's presidential campaign, RNC chairman Michael Steele's Senate campaign and Rep. Jim Gerlach, R-Pa., who sits on the House Transportation and Infrastructure Committee.

Myers was one of the top donors to Lynn Swann, a Republican who unsuccessfully tried to unseat Pennsylvania Gov. Ed Rendell, according to Pennsylvania campaign finance records. Democrat Rendell was often mentioned as a potential Obama pick for transportation secretary, and his deputy chief of staff was appointed undersecretary for transportation policy this week.

So was Obama's decision to highlight this company out of more than 100 other contractors that received funds Tuesday a subtle attempt to get reporters to dig into the firm's background and unwittingly affirm his promise of post-partisanship?

"It certainly doesn't matter to the 60 employees that were brought back to work for this job," said Mark Compton, director of government affairs for American Infrastructure. He noted that the company has had to lay off 350 employees, 17.5 percent of the staff, because of the economic downturn.

"We as an industry are struggling, and this was an investment that was worth making," he said.

The news conference was also an exercise in branding, in which President Obama unveiled two seals that will go on stimulus projects. And a company named American Infrastructure has a symbolic ring to it.

American Infrastructure is a classic bootstraps story. The family business from Worcester, Pa., was started by Myers' grandfather in 1939. It has since grown to 2,000 employees with subsidiaries in Pennsylvania, Maryland and Virginia.

The company is a community booster, funding scholarships and youth athletic programs. And the Myers-Lawson School of Construction at Virginia Tech is named after Myers and another construction firm owner.

ProPublica director of research Lisa Schwartz contributed to this report.