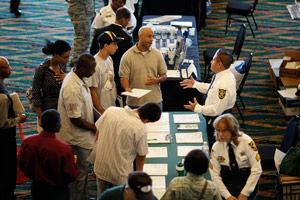 Florida has become the 19th state to borrow money to keep unemployment benefits flowing after the trust fund ran dry.

So far the state has borrowed $45 million, but officials estimate that it will have borrowed $1.2 billion by the end of the year.

As we detailed earlier this year in our series with public radio's Marketplace, states operate their own unemployment insurance systems with little federal control over benefit levels and how well they choose to finance their systems. Like many states, Florida requires employers to pay unemployment insurance tax only on the first $7,000 of each employee's income -- the federal minimum, which has not been updated since 1983.

Is your state's trust fund in danger of running out? See our interactive map.

Because of the stimulus bill, states have until January 2011 to pay back their loans with no interest. But if Florida's balance is not repaid before then -- a process that in many states has necessitated business tax increases or benefit cuts -- Florida will face tens of millions of dollars of interest payments that must be repaid from its general fund, taking money away from other state priorities.