On its face, Florida’s pedestrian statute 316.130(11) seems straightforward enough: fail to cross a street in a crosswalk where required, and you are liable for a ticket ranging from $51 to $77. The authorities across the state issue hundreds of the tickets every year with the public claim that they were trying to cut down Florida’s outsize number of pedestrian deaths.

But a Times-Union/ProPublica examination of statute 316.130(11) tickets given in four large counties from 2012 to 2017 found them rife with mistakes — errors that can cost people not only money, but also put them at risk of losing their driver’s licenses or having their credit ratings damaged.

The errors could be the result of an ignorance or misapplication of the statute’s terms. Here is the language of the statute: “Between adjacent intersections at which traffic control signals are in operation, pedestrians shall not cross at any place except in a marked crosswalk.”

But the examination shows that officers routinely write tickets for people crossing the street in places that are not in between intersections with traffic lights. In short, people are being punished for failing to avail themselves of safety features that aren’t readily accessible.

How We Examined the Tickets

The random sampling done by the Times-Union and ProPublica involved examining just over 2,000 tickets across the four counties. The data in all counties except Broward spans from 2012 through June 2017. Broward’s data is from 2013 through June 2017. We looked at 813 tickets in Broward; 349 in Hillsborough County; 443 in Miami-Dade County, and 406 in Orange County. Across all four counties, we found 64 percent of tickets in our sample were issued in error. The large sample size leads us to estimate about 64 percent of tickets overall were issued erroneously, with a margin of error of about 2 percentage points.

“I think it’s an absolute travesty that we have law enforcement that are giving out erroneous tickets, and don’t have a firm grasp of the law,” Pearson said. “You should have at least have an understanding of the statute that you’re using to create consequences in people’s lives.”

The Times-Union and ProPublica last month examined pedestrian ticket enforcement in Duval County and found that there were hundreds of erroneous statute 316.130(11) tickets given in recent years. Scores of those bad tickets led to the suspension of driver’s licenses. After Sheriff Mike Williams was told by a local City Council member that the Times-Union and ProPublica were asking questions about the statute, he asked the state attorney’s office for guidance on how the interpret and enforce the law.

Florida has for years struggled to improve its record on pedestrian deaths. Metropolitan areas in Florida made up seven of the top 10 most dangerous places for people on foot in the 2016 rankings by Smart Growth America, a nonprofit research group.

Ticketing pedestrians has been one of the tools the authorities have used, even while experts on the subject have concluded such measures are not likely to improve safety. Nearly 80 law enforcement agencies across the state in recent years have received Florida Department of Transportation funds to address pedestrian and bicycle safety, and many of those agencies have used the money to finance education and ticketing writing efforts.

Meanwhile, the state is still catching up in implementing measures experts agree could most improve safety for Florida’s pedestrians — upgrading the state’s transportation infrastructure by adding lighting, building safer roads and more after years of neglect. Florida today has numerous four-lane and six-lane highways with lots of local foot traffic and few marked crosswalks or intersections with traffic lights.

“I think it’s just atrocious,” Kraft said, “that something like that can cause people to dig in and have to interact with the justice system when really if they had had a safe environment to walk in to begin with, it wouldn’t have happened.”

There have also been several reports in recent years suggesting Florida police have unfairly targeted blacks in various kinds of enforcement efforts. Both the Broward New Times and the Tampa Bay Times have chronicled the disproportionate numbers of tickets given to black bicyclists. Indeed, a 2015 Tampa Bay Times investigation showing that police in Hillsborough County issued disproportionate numbers of biking tickets to blacks led to a federal inquiry. That inquiry found that the ticketing of bicyclists did not achieve any justifiable results in reducing crime or promoting public safety, and said the tickets had merely served to “burden” the county’s black residents. 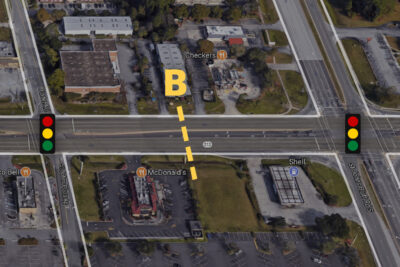 The Times-Union/ProPublica examination of the crosswalk tickets involved four major counties in differing corners of the state, all of which ranked among the counties that gave out the largest numbers of crosswalk tickets. We reviewed a large random sample of tickets in each county to calculate the rate of bad tickets. Extrapolating from our sample, we estimate roughly 3,500 tickets in the four counties had been given in error.

Reporters used Google Street View to examine the location of each ticket to determine if it was between adjacent intersections with traffic lights.

The tickets analyzed in Broward, Orange, Hillsborough and Miami-Dade counties were written by 43 different agencies including the Florida Highway Patrol. The Times-Union and ProPublica contacted the agencies in each county responsible for the highest number of the crosswalk tickets.

The Coral Springs Police Department in Broward County did not deny or admit that there were problems with their citations, but said that any of the 88 citations identified by the Times-Union and ProPublica as having been given in error could be contested in court. The Orlando Police Department said they did not agree with the Times-Union/ProPublica analysis, but would not say why.

The Miami Beach Police Department was the agency most willing to acknowledge that it might be getting the statute wrong.

“We will gladly look over any citations that you feel were issued in error in order to identify any training needs,” said Sgt. Jack Rodriguez, of the agency’s traffic homicide and accident investigation unit.

A spokesperson later said the agency believes it is issuing tickets correctly and that people have the ability to challenge them in court.

In Jacksonville, the sheriff’s office said it also used pedestrian tickets as a way to stop and question people suspected of criminal activity. The tickets, the officials said, gave officers probable cause to do so. Fifty-five percent of those given tickets in Jacksonville in recent years were black, despite African Americans making up just 29 percent of the population. The Times-Union/ProPublica examination prompted some local lawmakers and civil rights leaders to accuse the police of a form of racial profiling and called for a suspension to all pedestrian tickets until a formal investigation was conducted.

Gordon Weekes, assistant public defender for Broward County, said he worried a kind of targeted enforcement was going on in his county involving the cross walk statute. The Sunrise Police Department, for example, gave out 130 crosswalk tickets in recent years along a stretch of West Oakland Park Boulevard that includes a bus stop and a Wal-Mart store. The tickets were given largely to people who rely on public transportation in the majority black neighborhood, despite the fact there were not the required adjacent intersections with traffic lights.

Sunrise Police did not respond to a request for comment.

In reviewing the citations, the Times-Union and ProPublica discovered a number of criminal cases that started with crosswalk tickets that didn’t comply with state law and then lead to additional charges. Several were in Broward County.

Weekes, the public defender from Broward, said the charges emanating from flawed tickets show “the pervasiveness at which police officers are willing to use areas of the statute that give them authority to have contact with someone.”

“What other piece of information could an officer have to make a stop with someone to find drugs or some other form of criminality than them just walking?” Weekes said. “It seems like the race may be the driving force and then once the contact is made, the officers are then looking for some lawful basis to justify that stop.”

“It’s a lot to take in,” he said. “I have a whole lot of questions, I have a whole lot of concerns.  But on the face of it, this is very disappointing, it’s disturbing and it’s problematic. If everything that my gut is telling me is correct, then we need to do something to remedy it.”