As the shale gas boom sweeps across the United States, drillers are turning to a controversial legal tool called forced pooling to gain access to minerals beneath private property--in many cases, without the landowners' permission.

Forced pooling is common in many established oil and gas states, but its use has grown more contentious as concerns rise about drilling safety and homeowners in areas with little drilling history struggle to understand the obscurities of mineral laws.

Joseph Todd, who lives in rural Big Flats, N.Y., wasn't especially concerned when he learned in 2009 that his half-acre property had become part of a drilling unit. But when methane gas showed up in his drinking water well after the drilling began, he became outraged, describing forced pooling as "eminent domain for gas drillers."

"We never wanted to be a part of the drilling," he said. "To have something like this happen is beyond frustrating." Todd and some of his neighbors are now suing the company that is drilling near their neighborhood, even though no link has been proven between drilling and the contamination of their water.

People who see forced pooling as an infringement of property rights also tend to oppose the practice, including Pennsylvania's Republican governor, Tom Corbett, who has otherwise been a staunch supporter of the drilling industry.

"I do not believe in private eminent domain, and forced pooling would be exactly that," Corbett told a group of nearly 400 drilling industry representatives and supporters last month. He also said he won't sign pending legislation that would allow forced pooling for drilling in Pennsylvania's gas-rich Marcellus Shale.

Forced pooling compels holdout landowners to join gas-leasing agreements with their neighbors. The specific provisions of the laws vary from state to state, but drillers are generally allowed to extract minerals from a large area or "pool"--in most states a minimum of 640 acres--if leases have been negotiated for a certain percentage of that land. The company can then harvest gas from the entire area. In most cases, drillers aren't allowed to build surface wells on unleased land, so they use horizontal wells or other means to collect the minerals beneath those parcels.

Thirty-nine states have some form of forced pooling law. West Virginia and Pennsylvania each have measures that don't apply to drilling in the Marcellus Shale, and proponents are trying to expand the laws in those states. (Check out our chart of forced pooling laws across the United States.)

In New York, the owners of 60 percent of the acreage in the proposed drilling unit must agree to lease their land before the state oil and gas board will consider a driller's petition for compulsory integration, as it is known there. In Virginia, only 25 percent of the land must be leased. In all states with such laws, drillers must notify all the landowners within the prospective drilling area of their right to participate in a hearing before the oil and gas board, or whatever regulatory agency the state has set up for that purpose.

If the board approves the driller's petition, holdout landowners typically have three choices: contribute to the cost of the well and share profits from the sale of the gas; don't pay for the well and share the gas profits after a "risk aversion" penalty is subtracted, or receive a state-mandated minimum royalty payment. Landowners who choose none of these options are automatically enrolled in the last plan. Opting out is not a possibility.

Forced pooling is also supported by landowners who fear that drilling companies will place wells near their property and siphon off their gas without payment. Another group of supporters includes people who own the surface rights to their property while someone else owns the mineral rights--a situation known as a "split estate." Although these landowners usually aren't entitled to any payment, some forced pooling laws compel drillers to compensate them, too. 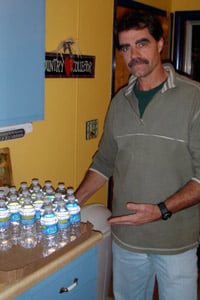 The complexities of forced pooling can be seen in Big Flats, a town of about 7,000 in Chemung County, in the southern tier of New York. Gas drilling has provided a huge boost to the county's economy, said budget director Steven Hoover, bringing in $30,000 to $40,000 a year in royalties and more than a million dollars in bonus payments from land the county has leased to drilling companies. That money, along with savings in other areas, has allowed Chemung County to cut property taxes over the last few years, Hoover said.

But Joseph Todd thinks struggling communities like his are too willing to accept the erosion of residents' property rights in exchange for an influx of cash.

In 2009, he and his wife Bonnie received a letter from the state informing them that Anschutz Exploration Corporation would be allowed to extract gas from beneath their land.

At first, the Todds didn't think much about it. No construction crews visited the modest ranch house where they had lived for more than 20 years. No heavy equipment materialized in their backyard. A horizontal well was built less than a mile away, but from the road its operations were almost invisible.

Then in September 2010 the couple discovered mud and methane in their private water well. Methane, the largest component of natural gas, isn't toxic, but it can be explosive if it accumulates.

"We've lived in this house for 22 years without any problems, and suddenly the water turns dirty and fizzy and can be lit with a match," said Todd, a firefighter.

After hearing about similar water problems near drilling operations in Pennsylvania, the Todds began to wonder if their dirty water--and the water problems that had simultaneously cropped up at nine neighboring homes--could be traced to the nearby drilling.

Denver-based Anschutz and the New York Department of Environmental Conservation both say the water problems aren't related to drilling. But in February, the Todds and their neighbors filed a lawsuit in Chemung County State Supreme Court, accusing Anschutz and its subcontractors of negligence in the drilling, construction and operation of the wells, causing the families to be exposed to combustible gases and toxic chemicals, and reducing property values. They are seeking millions in damages.

Anschutz spokesman Jim Monaghan said the company abides by state law and has committed no wrongdoing.

Joseph Todd says he's angry, not just about his contaminated well water but about the compulsory integration law that made it easier for drilling companies to move into his neighborhood. He said he has spent thousands of dollars on bottled water and laundromat fees--and that the royalty payments he's supposed to receive, even as an unwilling participant in the nation's natural gas boom, haven't begun arriving yet.

Correction, May 19, 2011: This story has been corrected. It should have made clear that state regulations in New York and Virginia require drillers to lease a certain percentage of the acreage in a drilling unit before forced pooling or compulsory integration can occur, rather than a percentage of the landowners. May 20: This story originally said 38 states have some form of forced pooling law. Actually, 39 states do.