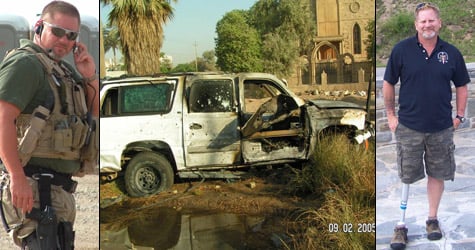 Tim Newman, 44, was a sheriff's deputy from South Carolina who worked for Virginia-based DynCorp to train Iraqi police -- a linchpin of U.S. plans to restore order in Iraq and bring home U.S. soldiers.

He was in an SUV driving through Baghdad's streets in September 2005 when an IED exploded. His best friend was killed. Newman was shredded, his right leg blown off, one of his arms slashed, his intestines shot through.

After months in the hospital, Newman, a former Marine, was determined to get back to normal. He became an advocate for injured contractors, working with widows and fellow police trainers to get counseling and medical treatment.

In the fall of 2006, he wrote an angry, four-page letter in red ink about his treatment to the then-CEO of DynCorp, Herb Lanese. Lanese, whose father had lost a leg in World War II, was taken aback.

"I am reading this thing, and he lost his leg. He was thrown on the trash heap. No one has responded to him. Nobody really gives a damn about him." Lanese said. "We met our obligation and paid him his insurance, but meanwhile his life is going to hell. And he feels like he's worthless."

"The first thing I thought about was my dad," Lanese said.

Lanese hired Newman to act as a liaison to contractors and family members. Newman worked with other former contractors to form a group called the CivPol Alumni Association -- one of the first such organizations specifically dedicated to helping contractors who worked in Iraq and Afghanistan.

Soon, however, Newman found himself embroiled in his own battle with CNA, which provided Defense Base Act insurance for DynCorp. Newman wanted an advanced prosthetic leg that would help power his gait to compensate for the muscle loss in his upper leg. CNA denied the request. The leg they approved cost $50,000, and the new leg was around $100,000. CNA said the technology was unproven.

In May 2008, more than three years after his injury, Judge Kenneth Krantz ordered CNA to provide Newman with the power knee. He received the knee about a few months ago and is now learning to use it. Newman believes the knee will improve his stamina and ability to get around.

Newman said the experience taught him that the U.S. government has not yet come to terms with its duties to contractors who helped wage war. Instead, private insurance firms have been allowed to run amok in their treatment of wounded contractors.

"Right now, it depends on what company a guy was with, what carrier he was with. Some get care for everything. And some people have to fight for everything," Newman said. "I just hate the lack of fairness."