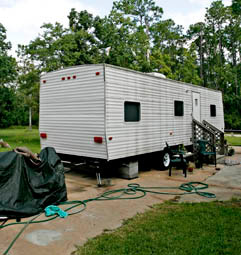 In case you missed it, the Federal Emergency Management Agency has again come under fire for providing formaldehyde-contaminated trailers to disaster victims. This time the controversy centers on 558 trailers distributed to victims of the floods that ravaged Iowa in June. A local television station tested 20 of the trailers and found that several had formaldehyde levels higher than what the Environmental Protection Agency says is safe.

The day after KGAN-2, the CBS affiliate in Cedar Rapids, ran its story, FEMA held a conference call with reporters and outlined the precautions the agency had taken to ensure the trailers were safe before they were delivered. FEMA officials said they had tested the trailers and found that the levels were lower than what the state of Iowa says is safe. FEMA also noted that formaldehyde levels can rise when occupants cook, bring home dry-cleaning, or smoke in their trailers. Three years ago FEMA officials made similar comments after Hurricane Katrina victims complained that formaldehyde fumes in their FEMA-issued trailers were making them sick.

Although those levels are lower than the formaldehyde levels found in many of the trailers given to Katrina victims, reports of formaldehyde-related symptoms are still pouring in to the Cedar Rapids television station.

Back in April, FEMA administrator R. David Paulison told Congress that the agency would never again use trailers in response to a disaster. But two months later the agency admitted that if another Katrina or Rita-sized hurricane struck this season, the agency might have to resort to the trailers again, which it did in Iowa.

Earlier this month ProPublica published a story in conjunction with the Atlanta Journal-Constitution about how FEMA misused a flawed Centers for Disease Control report to assure the public that the trailers provided to Katrina victims were safe.