A former Alhurra employee was arrested earlier this month when he tried to break into the White House.  The incident came just days after Homam Ali, 22, was allegedly fired for poor performance from his production assistant job at Alhurra, headquartered in Springfield, Va., where he had worked three years, according to two people at Alhurra familiar with his employment status. 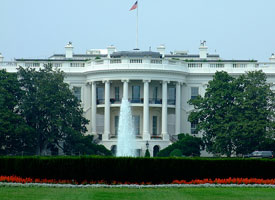 According to a criminal complaint filed by the U.S. Attorney's Office, Ali, who lives in Lorton, Va., approached a Secret Service officer at the northeast entrance gate of the White House at 1 p.m. on June 6.  Ali said he wanted "to pass classified information on to the President concerning Iraq," according to the complaint. When the officer asked Ali to leave, he complied, but threw his driver's license, social security card and permanent resident ID card through the fence and onto the north grounds of the White House. Ten minutes later he returned and tried to force his way into the visitor's exit. Two officers tackled Ali and took him to a police station for processing.

"It was a pretty routine thing - other than his alleged journalistic background," said Eric Zahren, a spokesman for the U.S. Secret Service.

Reached by phone, Ali said he "was on vacation" when he went to the White House. He denied trying to break in to pass information to the President.

Ali refused to comment on his experience at Alhurra.  "I've got no story, man," he said before hanging up. He is scheduled to be in D.C. Superior Court on June 30 for a status hearing on a misdemeanor charge of unlawful entry, which carries a maximum penalty of six months in jail.