At the time, it was the worst oil spill the United States had ever seen.

It was 1989, and Merle Savage, then a healthy 50-year-old, had heard the news about Exxon Valdez. Compelled to help, she spent four months cleaning up Alaska's oil-contaminated waters and shores.

She has never been the same since. Now 71, Savage still feels the toll that summer took on her health, but as she watches the reports coming out of the Gulf, she's felt something else:

After all, the symptoms seem to line up:

"I had an upset stomach all the time. I was throwing up, fainting, I was having trouble with my lungs," Savage said. It's been 21 years. She said her health has improved over the past two decades, but still, "everything is not back to normal. It's still difficult to breathe." 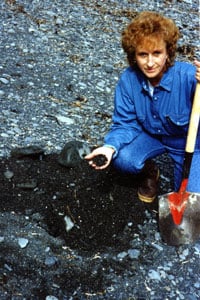 Asked if there's any doubt in her mind that the health problems in the Gulf are due to workers' chemical exposure, she was certain.

"No. There's none," Savage said. "Let's face it, crude oil is toxic. There's no question about it. Anybody who says it isn't has to have some type of interest otherwise. The fact that you're out there in it, and the heat and humidity and fumes, you breathe it and it's going into your lungs. I can't imagine anybody thinking different."

But there are people who suggest otherwise. The Coast Guard has suggested that heat, fatigue, or the smell of petroleum is causing the symptoms. BP CEO Tony Hayward suggested over the weekend that the symptoms could be caused by food poisoning, which he said was "a really big issue when you've got a concentration of this many people."

The comment has prompted public ridicule. But the suggestion that the illness is attributable in some way to crowded quarters is one that dates to the Exxon Valdez, when workers came down with what was then described as "a flu-like upper respiratory illness."

Here's an excerpt, from a 1999 article in the Anchorage Daily News:

Exxon and its main cleanup contractor, Anchorage-based Veco, acknowledged that summer that many workers got sick. But Exxon said then, and in the prepared statement now, that the illnesses were "a flu-like upper respiratory illness" that spread because of crowded living conditions on the barges where workers bunked. The illness became known as the "Valdez Crud" and Exxon said it spread even to lawyers and claims adjusters who had little direct exposure to the cleanup and its materials.

Exxon never revealed, and government officials never discovered, precisely how widespread the problem was. But years later, Exxon's internal medical reports showed up in court records. They revealed that an unspecified number of the 11,000 workers made 5,600 clinic visits for upper respiratory illnesses that summer. The source of the illness was never identified.

Then, like now, workers were assured by the oil company and the government that tests had been performed to check for harmful chemicals, and that the levels found were permissible by federal standards and were no cause for concern. (On its website, the EPA says it is "concerned about the potential for long-term health problems related to the spill," and that it continues to monitor the air for toxic compounds.)

Then, like now, volatile organic compounds such as benzene (PDF) were among the toxic chemical compounds found in air samples, but levels were low, and such chemicals are generally believed to evaporate quickly.

And then, like now, there were questions of whether appropriate safety equipment was provided. Savage says she was not given a respirator, but was given a paper mask that "didn't last long" once wet. Other Valdez cleanup workers, like Jacqueline Payne and her son Jacob, told The Boston Globe in 1992 that they had neither.

Earlier this week, The Wall Street Journal reported that BP said it is providing protective equipment to workers who need it, but BP spokesman Graham MacEwen told Yahoo! News that "we haven't provided respirators or masks because all the environmental data shows the air is safe."

BP spokesman Mark Proegler told me this morning that because air sampling results had been within permissible exposure limits set by the Occupational Safety and Health Administration, "with respect to respirators, since they're not required, we're not providing them unless there are indications about volatile organic compounds in the area, which there haven't been."

"If volunteers have concerns, we deploy them to a different area," Proegler said.

But the fact is, in spite of the air sampling data, cleanup workers in the Gulf are getting sick, as did their Valdez counterparts decades before. Numbers are sketchy, but a U.S. News & World Report piece published yesterday noted that reports of illness are on the rise.

We've reached out to the EPA, the Centers for Disease Control and Prevention, OSHA and the Louisiana Department of Health and Hospitals to obtain better figures on worker health complaints and hospitalizations related to the Gulf oil spill. We have yet to hear back.

I asked BP if it's enough to say that data show conditions are safe for workers, given that they're still coming down sick. I also pointed out that workers from Valdez who have been sick for two decades were told the same thing -- that testing showed the levels of chemical exposures were safe. Proegler's answer:

"Obviously it's in our best interest to make sure everyone is safe, and every organization is here to test it and make sure it is."

But despite such assurances, some are certain that crucial lessons from Exxon Valdez are going ignored.

Savage has written a book, Silence in the Sound, about her experience as a female general foreman cleaning up a historic oil spill. I asked if she regretted the experience. She answered right away.

"Oh my goodness, yes, honey. Yes. A thousand times over," she told me.

And then, as she had so many times, she stopped to cough and clear her throat.