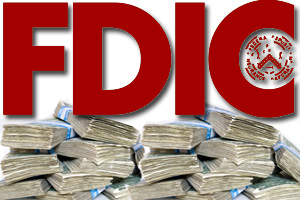 The FDIC shuffled three more banks off to oblivion on Friday. All three had been under cease-and-desist orders from federal banking regulators, but the agreements had failed to save them. With six months left in 2009, the demise of the three bring the total number of bank failures for the year to 40. The total cost to the FDIC's insurance fund for the day's failures amounted to $363.2 million.

The last to be pronounced dead was First National Bank of Anthony. The Kansas-based bank was established in 1885 but bad bets on real estate in the Kansas City-area proved its undoing. The FDIC entered into an agreement with Bank of Kansas to assume the deposits of the failed bank. The failure will cost the FDIC a relatively paltry $32.2 million.

The biggest bite of the day for the FDIC, at $217 million, was the failure of Cooperative Bank of Wilmington, N.C. The FDIC entered into an agreement with First Bank of Troy, N.C., to take on Cooperative's non-brokered deposits. This past April, another Wilmington bank -- Cape Fear Bank -- also failed.

Georgia, the state with the most bank failures this economic downturn, rounded out Friday's list with the failure of Southern Community Bank of Fayetteville. United Community Bank of Blairsville, Ga., agreed to assume Southern's non-brokered deposits. Seven banks have failed in Georgia this year, most in the Atlanta area.