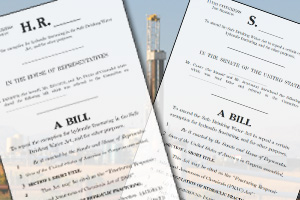 In a widely expected move that is sure to draw the ire of the oil and gas industry, Democratic members of Congress today introduced twin bills to amend the Safe Drinking Water Act and give the Environmental Protection Agency authority over the controversial drilling process called hydraulic fracturing.

The stand-alone bills in both the House (PDF) and the Senate (PDF) for the Fracturing Responsibility and Awareness of Chemicals Act -- dubbed the FRAC Act (PDF) -- would also require the energy industry to disclose the chemicals it mixes with the water and sand it pumps underground in the fracturing process, information that has largely been protected as trade secrets.

The House bill was introduced by Diana DeGette, D-Colo., Maurice Hinchey, D-N.Y., and Jared Polis, D-Colo., and will now be debated inside the House Energy and Commerce Committee. According to DeGette, the bill may proceed alone, or she could attach it to a larger piece of legislation.

"Frankly we are leaving all the options on the table for moving this bill forward," DeGette said after hearings on the issue last week.

Hydraulic fracturing has attracted scrutiny in the past year after a series of reports by ProPublica found water contamination in areas across the country where drilling takes place. Because the fracturing process was exempted from federal water laws by the 2005 Energy Policy Act, scientists at the Environmental Protection Agency have said they can't adequately investigate cases of pollution or determine whether fracturing might be to blame.

"Families, communities, and local governments are upset that the safety of their water has been compromised by a special interest exemption, and we join them in that frustration," Polis said in an e-mail this morning. "The problem is not natural gas or even hydraulic fracturing itself. The problem is that dangerous chemicals are being injected into the earth, polluting our water sources, without any oversight whatsoever."

The energy industry contends that the FRAC Act, which removes the Safe Drinking Water Act exemption, amounts to an additional layer of regulation that is unneeded and cumbersome. States do an adequate job of regulating hydraulic fracturing already, according to the Independent Petroleum Association of America, and industry research estimates that complying with federal oversight would add approximately $100,000 to the cost of each new natural gas well in the United States.

"Such action runs counter to the nation's energy goals -- increasing the supply of American oil and natural gas -- by making it too costly to produce," said Lee Fuller, vice president of government relations for the Independent Petroleum Association of America, in an e-mail. "Statements that hydraulic fracturing is unregulated are simply not true. It's been regulated assiduously by the states for more than 50 years."

It is unclear exactly how federal oversight would lead to mounting costs. EPA officials in Washington say the section of the Safe Drinking Water Act that governs the oil and gas industry allows for flexibility and already defers oversight of drilling to the states. According to the industry and a recent industry-affiliated study, most state programs already have regulations in place. In such cases, restoring the EPA's authority could mean that the EPA approves ongoing state oversight and that little else would change.