This story was co-published with The Daily Beast

U.S. Army Private First Class Lawrence S. Gordon — killed in Normandy in 1944, then mistakenly buried as a German soldier — will soon be going home to his family.

But don’t thank the American military for this belated return. The Pentagon declined to act on his case, despite exhaustive research by civilian investigators that pointed to the location of his remains.

Instead, Gordon’s family and advocates used the same evidence to persuade French and German officials to exhume Gordon and identify him through DNA testing. That’s right: the relatives of this U.S. soldier, who fought against the Germans, are relying on Germany to bring him back home.

Gordon’s case is another example of breakdowns in the American system for finding and identifying tens of thousands of missing service members from past conflicts. More than 9,400 troops are buried as “unknowns” in American cemeteries around the world. Yet, as ProPublica and NPR recently reported, the Joint Prisoners of War/Missing in Action Accounting Command (J-PAC) rarely disinters any of those men to try to use DNA to identify them. On average, just 4 percent of such cases move forward. 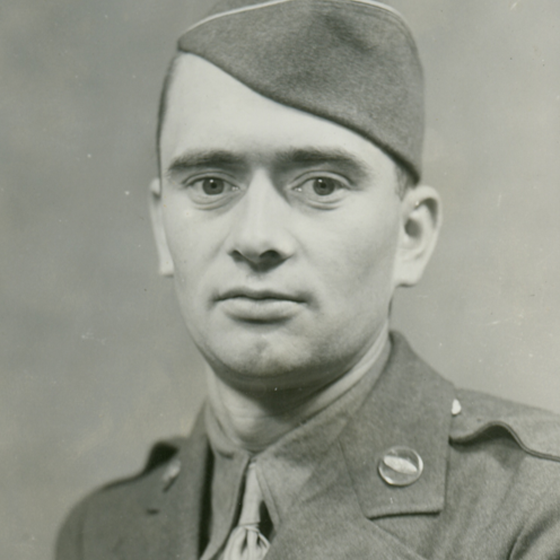 U.S. Army PFC Lawrence S. Gordon was killed in Normandy on Aug. 13, 1944. He was mistakenly buried as a German unknown soldier in a cemetery in France. (Photo courtesy of Gordon family)

Several U.S. and international news outlets have written about Gordon’s case, but ProPublica obtained a previously undisclosed J-PAC memo from April 2013 that, for the first time, reveals the agency’s rationale for turning aside his family’s entreaties. One J-PAC historian advised “extreme caution” on the case, saying that making an identification would require a “monumental” amount of research about thousands of Americans and Germans killed in roughly the same area.

A Pentagon review ordered by Defense Secretary Chuck Hagel of how the military is managing its mission to find and identify MIAs concludes next month.

Gordon’s family benefited from a fluke of circumstance: Gordon was in a German cemetery in France, not an American one, allowing his case to advance without the U.S. military’s participation.

Jed Henry, a filmmaker from Wisconsin whose grandfather served in Gordon’s unit, took up Gordon’s case in 2011. Henry scoured records, witness statements and various archives and pieced together evidence about Gordon’s whereabouts.

Gordon’s family knew only that he was killed in Normandy when a German shell hit his armored car in August 1944. Gordon’s bloody wallet was sent home to his mother in Canada. (Gordon had Canadian citizenship, but he was born to American parents and decided to enlist in the U.S. Army.)

Henry found paperwork revealing the Army had recovered the destroyed vehicle and two badly burned, unidentifiable bodies. They were buried as American unknowns.

After the war ended, the Army dug up both sets of remains, finding they wore German clothing. Using fingerprints, one was identified as U.S. Army Pvt. James Bowman, who had been in the turret of the car next to Gordon.

It was impossible to use fingerprints to identify the other set of remains. The bones were given a number, X-356, for lack of a name. Because of the German clothing, they were turned over to the Germans, who interred them in a crypt in France.

That evidence was enough to persuade the French and German governments to exhume the remains last fall and test for DNA, but not the Pentagon.

“Why is that we had enough evidence to convince the French and the Germans but not the Americans?” Henry asked. “Why is the burden of proof in America so much higher? It’s ludicrous.”

The April 2013 internal J-PAC memo argued that the evidence was too thin to eliminate the thousands of other men who died in the area during that time, concluding “that the association between [Gordon] and this set of remains was possible but improbable.” J-PAC historian Jeffery Johnson questioned whether it was even within the agency’s authority or responsibility to try to identify Gordon because he was a Canadian citizen.

Another J-PAC official told Henry in an email that the case didn’t meet the criteria for disinterment set by Pentagon policy. In practice, J-PAC’s scientific director, Tom Holland, has broad leeway to interpret that criteria and he has set an extraordinarily high standard that has led to the 96 percent rejection rate. J-PAC did only one World War II disinterment in 2013 and none in 2012.

So the critical tests on the remains were performed by France’s National Forensic Science Institute, which found that DNA from a molar matched that of Gordon’s nephews, according to a letter from the French prosecutor overseeing the matter.

"Eventually, justice has won. My congratulations for showing such honorable commitment, patriotism, faith and courage to walk that long path for your uncle," Backen wrote. "He will come home and that is what counts. He fell in a battle against my countrymen, but he did this under a just cause: To liberate Europe from fascism and to restore peace, freedom and humanity. His sacrifice was not in vain.” 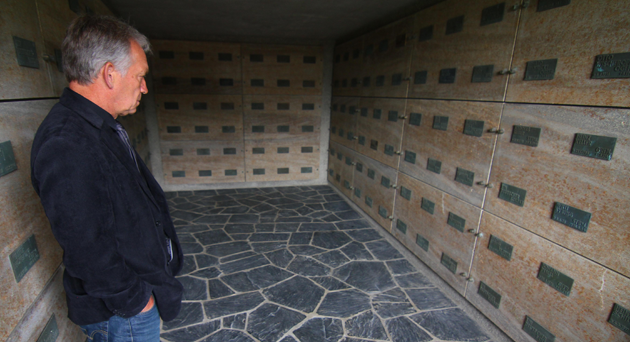 Lawrence R. Gordon at the crypt in France where his uncle and namesake, U.S. Army PFC Lawrence Gordon, was mistakenly interred as a German unknown soldier after being killed in Normandy in 1944. The French and German governments agreed to exhume PFC Gordon to test for DNA after the U.S. military declined to pursue the case. (Photo courtesy of Jed Henry)

There will be a ceremony on June 10 in France to turn Gordon’s remains over to his family. For the flight across the Atlantic, representatives of the Canadian, German and French military will escort Gordon, Henry said. It’s unclear if the American military will be there, he added.

The remains will go next to the University of Wisconsin for an anthropologist and odontologist to inspect. The lab there will also test the DNA to confirm the French results. The family has invited J-PAC to observe the process but has opted not to give the remains to the agency to examine independently.

The family won’t wait on the U.S. government to proceed with burying Gordon in Saskatchewan on Aug. 13, the 70th anniversary of his death, Henry said.

The Defense Prisoner of War/Missing Personnel Office said in a statement that “we strongly believe that Pfc. Gordon will receive full military benefits and honors suitable to the honorable service and sacrifice that he made for all of our Countries during the Second World War.”

Gordon’s family and advocates are frustrated the U.S. military is just now stepping up to be involved.

J-PAC’s “mission statement says to achieve the fullest possible accounting of soldiers,” Henry said. “They’re never going to get everybody, but they can certainly do a hell of a lot better than what they’re doing.”

For more on this story, see Megan McCloskey and NPR’s original investigation into the U.S. military’s failure to identify the remains of its missing service men and women or learn how you can help find an MIA.