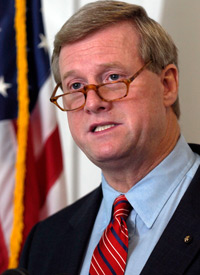 It's been a rough year for Edwin Foulke.

The assistant secretary of labor in charge of the Occupational Safety and Health Administration (OSHA) has been on the defensive in the news far more than an agency chief might want.

There was the Georgia sugar refinery that blew up in February, killing 14 workers, and the ensuing outcry over the agency's lack of combustible dust standards -- standards that labor activists and even the head of the company now say could help prevent such tragedies.

There was the Charlotte Observerseries that investigated rampant underreporting of injuries and illnesses, questioning the administration's assertion that rates are falling.

Then last month, the Washington Postbroke the story that the Department of Labor was quietly pushing through a rule that would make it harder to regulate workplace toxins.

In all of those cases the empowered Democrats -- often led by California Rep. George Miller's House Committee on Education and Labor -- blasted the Bush administration with hearings and proposed legislation.

So there must have been a collective sigh of relief in the halls of OSHA and its parent agency, the Labor Department, when news outlets (including the New York Times) reported last week that workplace fatalities are at an all-time low.

U.S. Secretary of Labor Elaine Chao issued this statement: "This is continued evidence that the initiatives and programs to protect workers' safety and health, designed by and implemented in this administration, are indeed working. In addition to a decline in the overall number of fatalities, the rate for 2007 declined to 3.7 fatalities per 100,000 workers. This is the lowest fatality rate in recorded OSHA history."

"Look at the data," said Bob Whitmore, OSHA's head of recordkeeping who has been on leave since July 2007. "What you see isn't what you get."

Whitmore has been on disciplinary leave since July 2007 after a complaint that he created a hostile work environment. Known for his outspokenness as well as his expertise, Whitmore has been critical of the agency and recently testified before Miller's committee that illnesses and injuries are underreported.

But it's important to understand that those numbers include two special categories: deaths involving transportation and violent acts. Both often fall under the purview of other agencies -- transportation departments, for example, in the case of a salesman who dies in a car accident, or local police departments in the case of a convenience store clerk shot in a robbery.

"What are the real things OSHA has something to do with?" asked Celeste Monforton, a researcher at the George Washington University School of Public Health. There is little the agency could have done to prevent some of those deaths, Monforton said. 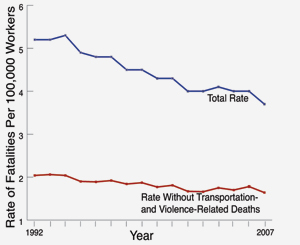 The better indicator of workplace safety -- at least as far as OSHA is concerned -- might be the aggregate number of falls, workers who died after getting hit by something heavy, deaths related to hazardous substances and fatalities from fires and explosions. Subtracting transportation- and violence-related deaths, the picture that emerges is less impressive.

Because the economy tends to add workers every year, total deaths is not necessarily the most telling statistic. If there are more workers, it's safe to assume there will be more work-related deaths. So a better gauge is the rate.

Some of the most dangerous jobs in the U.S. economy -- manufacturing -- have continued to move overseas. This is a point Whitmore and labor activists, highlighting the growing service sector, glom onto when critiquing the numbers.

"Your rate of fatalities is going to drop because you're adding toy store workers instead of construction workers or steelworkers," Whitmore said.

A spokeswoman for OSHA chief Foulke declined to respond to criticism of how the agency interprets fatality data and said her boss stands behind Secretary Chao's statement.

About a year ago, when the BLS released fatality data for 2006, OSHA issued a statement saying: "The fatality rate declined to its lowest level since BLS began collecting data in 1992."

It turned out not to be true.

The BLS normally releases preliminary data in August, then revises the numbers the following April. So in August 2007, BLS reported 5,703 fatal workplace injuries in 2006, or slightly fewer than the 5,734 a year earlier. The fatality rate fell from 4.0 per 100,000 workers to 3.9.

In revising the following spring, however, the agency said deaths jumped to 5,840 and the rate went back up to 4.0.

It's great to think workers are safe on the job and that more Americans are coming home to their families and loved ones every night. Whether that's actually the case depends on how you count.