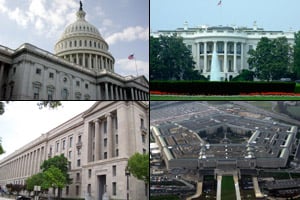 The federal government released its financial report (PDF) this week, and for the 12th year in a row, the comptroller general said his agency, the GAO, cannot comment on the reports because of "numerous material internal control weaknesses and other limitations" with financial reports from the Departments of Defense, Homeland Security and elsewhere.

Since a consolidated federal financial report was first required by law starting in fiscal year 1997, the GAO has said that agency systems for keeping track of finances were flawed.

But with government finances becoming more stretched with the decline of the economy, "the need for reliable high-quality financial information has never been greater," said Gene L. Dodaro, acting head of the GAO in a statement.

Among the problems cited by GAO:

"The federal government is on an unsustainable longer-term fiscal path," the GAO said in its report. It "faces increasing pressures yet a shrinking window of opportunity for phasing in adjustments."

The Department of Defense's financial reporting system has been on GAO's "high risk" (PDF) list of serious problems in the federal government since 1995. Other programs on the list are contracts management programs at several federal agencies, tax collecting and the nation's transportation system. The high-risk list identifies federal programs that GAO considers to be especially vulnerable to fraud, waste, abuse and mismanagement.

The Department of Defense has outlined a fix for its financial management problems: the Financial Improvement and Audit Readiness plan.