The Government Accountability Office, the congressional watchdog agency, is urging the federal government to make information about thousands of political appointees — including their names, titles and federal salary disclosures about their assets, debts and past salaries — publicly available. The GAO’s report, which was released Friday, noted that ProPublica’s Trump Town is the only place people can access much of this information.

The report portrayed such information as crucial to holding appointees to high standards. “Strong ethics programs are critical to ensuring public trust in government and the integrity of actions taken on the public’s behalf,” it states. “Political appointees, in particular agency heads, have a personal responsibility to exercise leadership in ethics. … [M]embers of the public need access to information on who is serving in political appointee positions. Otherwise, they are limited in their ability to discern whether appointees are performing their duties free of conflict.”

Neither federal agencies nor the White House are required to publicly post full, up-to-date listings of political appointees or senior government officials, many of whom don’t face confirmation or public hearings by the Senate. “In the absence of comprehensive and timely data on political appointees serving in the executive branch, two nongovernmental organizations — the Partnership for Public Service and ProPublica — stated that they collect and report some data themselves,” the report notes.

The report states that ProPublica’s Trump Town tracks all types of federal political appointees but “one limitation is that they rely on agency responses to FOIA requests and therefore the data may not be comprehensive or timely.” ProPublica staffers (including the author of this article) were interviewed by the GAO in 2018. The report goes on to say:

Making such information available would promote transparency. The public, including independent researchers, the media, and nongovernmental organizations, can use these data to perform independent analyses to identify gaps and challenges for filling political appointee positions or to identify potential conflicts of interest. Such analyses would also facilitate congressional oversight of executive branch appointees by providing a comprehensive and timely source of information on political appointees.

The GAO recommended Congress consider legislation that would require the “comprehensive and timely information on political appointees serving in the Executive Branch to be collected and made publicly accessible.” The Senate Committee on Homeland Security and Governmental Affairs is now considering the GAO recommendation.

The GAO said the federal government’s human resources department, the Office of Personnel Management, is “positioned to collect, maintain, and make political appointee data publicly available on a frequent and recurring basis.” But it also said the OPM is “limited in its ability to provide comprehensive data, in part because it does not regularly receive data from each agency that has political appointees.”

The OPM did not respond to requests for comment.

Elsewhere in the report, the GAO found several instances of lapses and delays in filing required ethics and financial disclosure records by political appointees at the Department of Health and Human Services, the Department of the Interior and the Small Business Administration. In response to the report, the lawmakers who requested the GAO review — Sen. Tom Carper, D-Del., Sen. Gary Peters, D-Mich., and Rep. Elijah Cummings, D-Md., chairman of the House Oversight and Reform Committee — criticized those federal agencies as well as the White House, which ignored GAO’s requests for information and interviews.

Launched in March 2018, Trump Town is a searchable database of 3,232 current and former Trump administration political appointees, including their jobs and offices, employment history, lobbying records, government ethics documents, financial disclosures and, in some cases, resumes. ProPublica routinely requests staffing lists and other information through the Freedom of Information Act and the Ethics in Government Act of 1978.

The Partnership for Public Service, founded in 2001 as a nonpartisan nonprofit that advises federal agencies during the presidential transition process, among other things, started publicly tracking political appointees who were subject to Senate confirmation in December 2016. “The basic insight of the GAO report is that you can’t truly have an accountable government if you don’t know who runs the government in real time,” said Max Stier, the partnership’s president and CEO.

The limitations in accessing government staffing data are partially by design. In 2012, a group of former federal officials in law enforcement, diplomatic and national security positions wrote to congressional leaders, saying a searchable list would “create significant threats to the national security and to the personal safety and financial security of the executive branch officials and their families, especially career employees.” The letter also called complete personal financial information of all senior officials on the internet a “jackpot for enemies of the United States intent on finding security vulnerabilities they can exploit.”

The GAO report did not address this assertion, but it implied such circumstances are a long way off: “Until the names of political appointees and their position, position type, agency or department name, start and end dates are publicly available at least quarterly, it will be difficult for the public to access comprehensive and reliable information.” 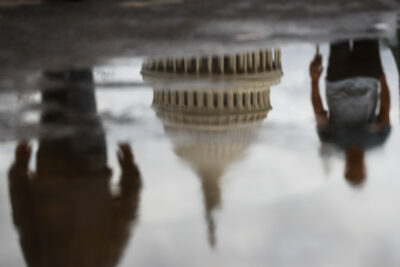 Former Trump Officials Are Supposed to Avoid Lobbying. Except 33 Haven’t.